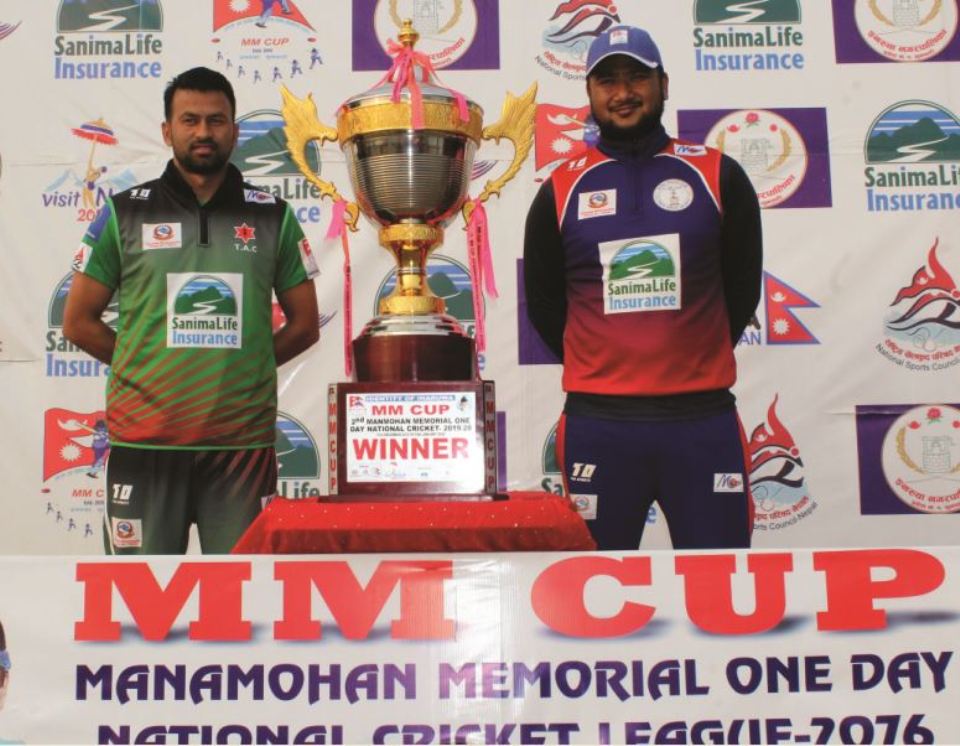 Police scored a total of 229 runs before dismissing Sudur Paschim Province for 130 runs to secure a 99-run win in the second semifinal match played at the Inaruwa Cricket Ground.

Player-of-the-match Dhakal bowled 6.4 overs in a magical spell of spin-bowling to dismiss five Sudur Paschim batsmen conceding only nine runs off it. The current U-19 national cricketer Dhakal ousted Khadak Bohara, who bestowed a rearguard staying 40 deliveries to score 14 runs, Sher Malla and Dipak Bohara for ducks. He also dismissed Sudur Paschim captain Santosh Bhatta and last wicket Bikram Thagunna for a run each to end the innings after 33.4 overs.

In a one-sided match, Dhakal’s left-arm bowling partner Lalit Rajbanshi started the downfall of Sudu rPaschim innings picking up early three wickets at the start of the innings. The frontline spinner of Nepal national cricket team, Rajbanshi dismissed key batsmen Arun Airee for six runs off 21 deliveries, Lokesh Bam for eight runs off six deliveries and top-scorer of the innings Kiran Thagunna to push Sudur Paschim innings in the back foot.

Earlier, Police won the toss and elected to bat first. Off-spinner Sher Malla continued to open the bowling for Sudur Paschim as he dismissed in-form Sunil Dhamala for a run off five deliveries to give the bowling team a good start in the innings.

Binod Lama, the most successful bowler of the tournament so far, then dismissed Amit Shrestha for eight runs off 37 deliveries to leave the Police innings reeling at 57 runs for the loss of two wickets at 13.4 overs stage.

However, national cricket team vice-captain Dipendra Singh Airee and rejuvenated Anil Kumar Sah shared a rebuilding partnership of 61 runs for the third wicket. Airee went on to score 68 runs, his second half-century of the tournament, off 76 deliveries which included six boundaries and a six. Similarly, Sah contributed 31 runs off 39 deliveries which included four boundaries.

Apart from Yogendra Singh Karki’s 29 runs off 33 deliveries which included four boundaries and a six and Kushal Bhurtel’s scrappy 18-ball 17 runs, the Police innings suffered a collapse losing next six wickets to 70 runs. The total was reduced to 188 runs for the loss of eight wickets in 40.3 overs when it lost captain Manjeet Shrestha for nine runs off 18 deliveries.

Malla and Lama shared three wickets each in their respective 10-over spells in the match. Similarly, captain Bhatta chipped in with a wicket.

The Police innings was rejuvenated by pace bowler Lalit Singh Bhandari’s scintillating cameo of 40 runs off as many deliveries. He shared a crucial partnership of 39 runs with Dhakal for the ninth wicket smashing two boundaries and four sixes during the innings which changed the momentum toward Police.

Aakash Chand then disrupted Bhandari’s stumps to end the valiant innings. Chand further dismissed Rajbanshi for two runs to end the innings on 229 runs on 49 overs. Chand registered a three-wicket-haul.

Police qualified for the final and will face the other departmental team Tribhuvan Army Club for the trophy on Saturday.

Army’s Malla leads the runs tally for the tournament with 183 runs in three matches followed by Police’s Dipendra Singh Airee’s 143 runs in the second place.

Similarly, Army’s SushanBhari has 11 wickets after three matches in the second place and Sudur Paschim’s Lama who had 14 in same number of matches. Police’s Dhakal has eight wickets.