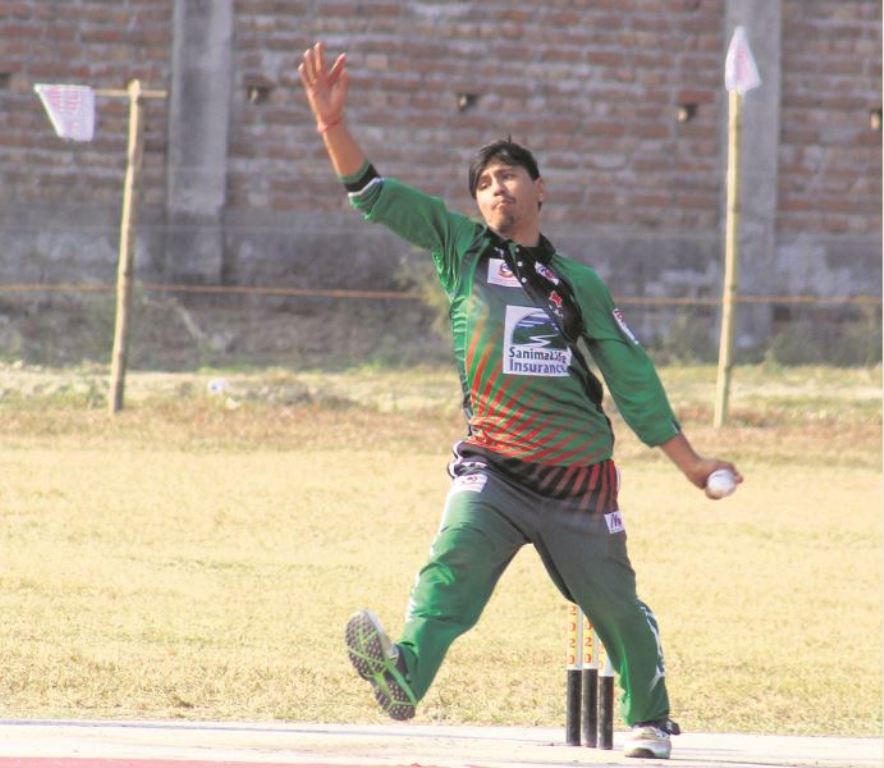 In the first semifinal match played at Inaruwa Cricket Ground, Tribhuvan Army Club batted first to score 216 runs before getting all-out in 46.3 overs. The bowlers shared nine wickets dismissing Province 3 for 152 runs in 38.1 overs to secure the berth in the final.

Bhari was aided by Shahab Alam’s two wickets. Alam bowled nine overs in the match and conceded 26 runs off it. Similarly, Bikram Sob, Hari Bahadur Chauhan, Hari Krishna Jha and Kushal Malla shared a wicket each. Malla picked up the key wicket of Sonu Tamang who lit up the day with an impressive but lone innings of 74 runs.

Tamang entered the chase when Province 3 was staring at early defeat losing its seven wickets for 73 runs at 19.1 overs. The middle order batsman then shared a partnership of 48 runs with Nandan Yadav and 31 with Gautam KC to take the score to 152 before Province 3 eventually fizzled out of the chase. Tamang faced 75 deliveries during his stay and registered four boundaries and six maximums.

Skipper Subash Khakurel looked good for his 15 runs off as many deliveries before getting run-out after a miscommunication with partner Ishan Pandey. Likewise, Pandey stayed 33 deliveries for his 17 runs before holding out to Bhari off Chauhan. None of the other batsmen were able to reach double-digit figures. Province 3 had defeated Province 5 and Province 1 in Group ‘C’ to reach the semifinal as group winners.

Earlier, Army won the toss and elected to bat first. Anil Kumar Mandal’s patient 43 helped Army Club collect some important runs against the new ball. He faced 73 deliveries and smashed three fours. Rohit Kumar Paudel then added 29 runs off 37 deliveries which included four boundaries to keep the scoreboard ticking as Province 3 bowlers kept things tight from the other end. Rajesh Pulami Magar chipped in with 17 runs off 15 deliveries whereas Bhim Sarki scored 15 off 28 deliveries before Army Club was reduced to 115 runs for the loss of six wickets in 30.2 overs. The Province 3 bowlers looked in control and Army Club batting innings stared at an early end of the innings.

However, the most successful batsman of the tournament, Kushal Malla, who was demoted to number eight despite opening the batting in the last group match, contributed another quick-fire 26-ball 37 runs. The innings included four boundaries and two sixes adding crucial runs with the lower order batsmen. The player-of-the-match Malla turned the lowly looking total to a competitive one. He was aided by Bikram Sob’s 24 runs off 33 deliveries which included three boundaries. Likewise, Bhari added 13 runs off 14 deliveries.

Gautam KC was pick of the bowlers with a four-wicket-haul. He dismissed Jha, Chauhan in his first spell and came back later to oust Sob and Bhari to end the Army Club innings on 216 runs off 46.3 overs. Leg-spinner Tilak Raj Bhandari, pace bowler Nandan Yadav and Pandey shared two wickets each.

Army Club had topped the Group A to reach the semifinals whereas it has qualified for the final match on Saturday against the winner of the second semifinal match. The first finalist defeated Armed Police Force Club, Manmohan Memorial Cricket Club and Province 3 on its route to the final.

The Group ‘A’ winner Nepal Police Club and Group ‘D’ winner Sudur Paschim Province will face each other in the second semifinal match on Thursday.

Why was the University Bill introduced, leaving aside the Education Bill?
2 minutes ago

No decision on home ministry leadership until full text of SC’s verdict on Rabi Lamichhane is out: PM Dahal
55 minutes ago