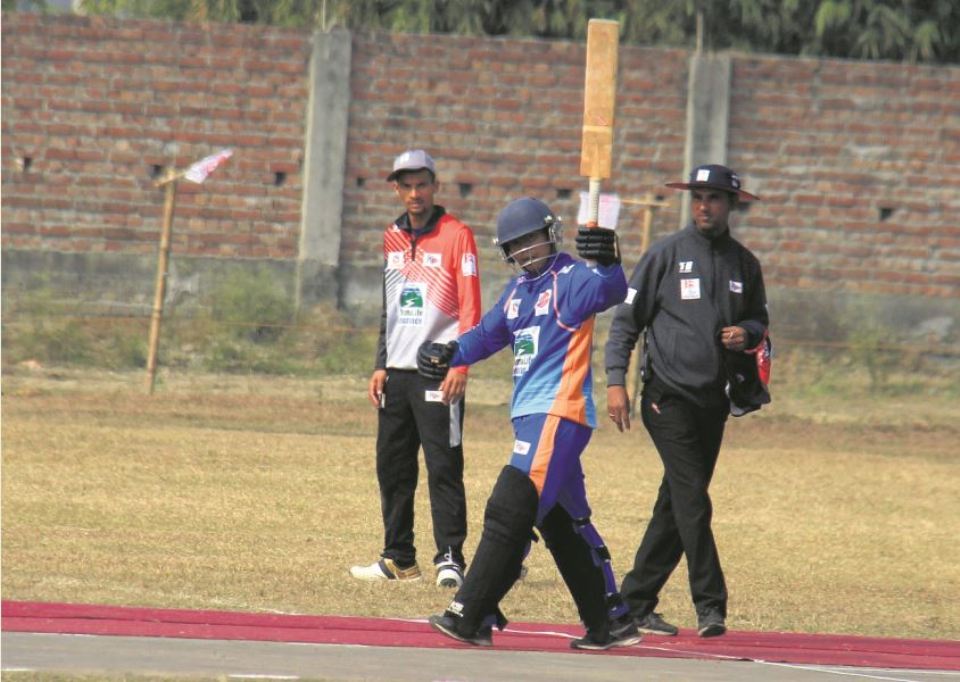 In the last group match played at Inaruwa Cricket Ground, Malaysia raced to 298 runs for the loss of eight wickets in 47 overs whereas Gandaki was dismissed for 106 runs in 27.2 overs. The match was reduced to 47 overs per side match after a late start due to heavy morning fog affecting visibility.

In a remarkable comeback win after suffering a humiliating defeat against SudurPaschim Province on Saturday, SuharrilFetri led the bowling charts with a four wicket haul in 7.2 overs. He conceded 29 runs off it registering two maiden overs. He was supported by Anwar Rahman and Vijay Unni’s three wicket each to comprehensively defeat Gandaki.

None of the Gandaki batsmen were able create any impact in the chase. Veterans Deepesh Khatri, captain Govinda Pradhan and Bidhan Shrestha were dismissed for 9, 1 and 10 runs respectively to leave the chase in disarray from the disciplined Malaysian bowlers. BipinKhtri who was promoted to bat number 6 smashed few boundaries before missing his half-century by eight runs. He registered three towering sixes and two boundaries during his 37-ball 42 runs which was the only bright spot in an innings which was controlled by the visiting team. Some late flurry by PravinDhakal helped Gandaki cross the 100 run mark. Dhakal registered three boundaries and a six during his 32-ball unbeaten 19 runs. He added 20 runs for the last wicket with ChandrakantPaudel, who was dismissed for a duck after a 21-ball rearguard action.

Earlier, Malaysia XI won the toss and elected to bat first. The visiting team made an emphatic comeback with the bat against Gandaki after getting 49 all-out against SudurPaschim Province on Saturday.  Wicket-keeper opening batsman AinoolHaqqiem led the scoring charts with his 89 runs, falling 11 runs short of the well-deserving century. The player-of-the-matchHaqqiemsmashed 11 boundaries during his 111-ball stay. He shared an opening partnership of 78 runs with Bhusan Save who was more aggressive than the two. Save brought up his half-century 33 deliveries which included eight boundaries and a six. Both batsmen were dismissed by Bipin Khatri.

Bipin Khatri was pick of the Gandaki bowlers dismissing all three half-centurions of the first innings. Similarly, Chandra Kant Pandit chipped in with two wickets whereas Govinda Pradhan registered a wicket in the match. Two Malaysian batsmen were caught short of the crease.

Sudur Paschim has already qualified for the semifinals after decimating both, Malaysia XI and Gandaki, teams in earlier group matches on Saturday and Sunday. Tribhuvan Army Club, Province 3 and Nepal Police Club are other semifinalists of the ongoing second edition of MM Cup. Meanwhile, the Malaysian team will head to Pokhara to play three one-day matches against Nepal national team in the closed camp for the upcoming three nation tri-series at TU Cricket Ground in February.

The winners of the semifinals will meet in the final match on Saturday to stake their claims as the champions of the second edition of MM Cup.

RSP Chairman Lamichhane warns of quitting govt if the party is denied home ministry
3 hours ago
UML in favor of reinstating Lamichhane as Home Minister, Maoist Center opposed to the idea
12 minutes ago

No decision on home ministry leadership until full text of SC’s verdict on Rabi Lamichhane is out: PM Dahal
25 minutes ago

Pokhara-Baglung Highway to be closed for upgrading
42 minutes ago