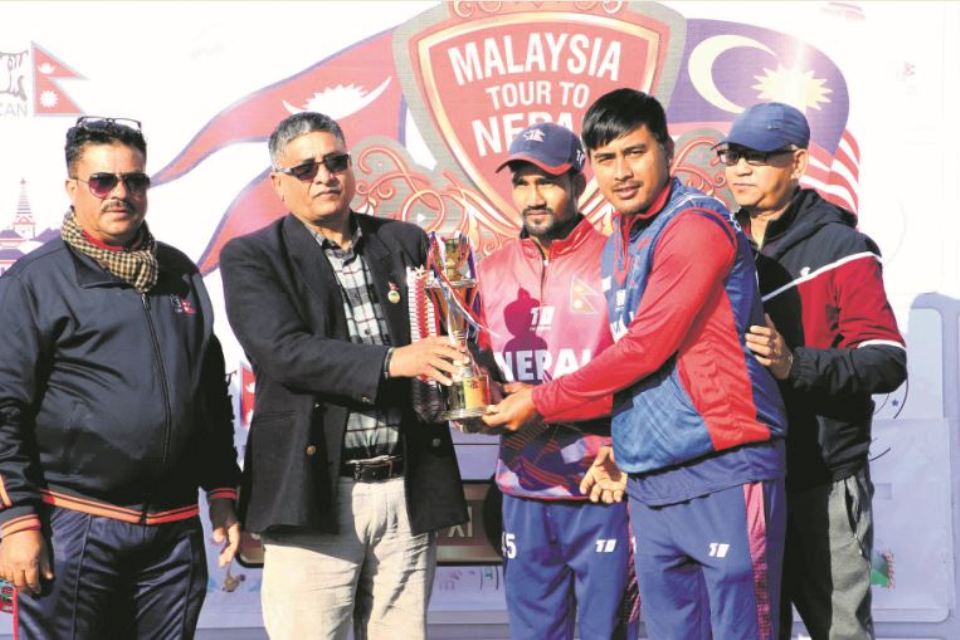 KATHMANDU, Jan 24: Rohit Kumar Paudel hit purple patch top-scoring for Cricket Association of Nepal (CAN) President XI during the chase against Malaysia Secretary XI to secure the third consecutive win in the three-match practice series played at Pokhara Stadium’s cricket ground in Pokhara on Thursday. CAN XI sealed the series 3-0.

Player-of-the-match Paudel registered 81 runs as CAN XI chased down the target of 158 runs in 23.5 overs for the loss of five wickets. Middel-order batsman Paudel smashed eight boundaries and four sixes in the innings to notch up his second half-century on the trot.

Vijay Unni scalped two wickets for the visiting team whereas Devendra Mogan, Muhammad Hafeez and Anwar Rahman shared a wicket each in the losing cause. Only four bowlers were used by Malaysia.

Earlier, Malaysia XI won the toss and elected to bat first. Nepali bowlers were consistent and penetrative throughout the innings dismissing the guest team for 157 runs in 43.4 overs.

Abinash Bohara was the pick of the bowlers for Nepal taking three wickets in nine overs conceding 30 runs off it.

Bhusan Vilas Save top-scored for Malaysia XI with 30 runs off 38 deliveries which included four boundaries and a six.

He added 47-run opening partnership with Sharvin Muniandy who contributed 22 runs off 25 deliveries which included three boundaries and a six.

Similarly, Mogan chipped in with 28 runs down the order off 40 deliveries which included two boundaries and sixes each to add some crucial runs in the total.

The Malaysian cricket team is touring Nepal under its cricket board’s development program.

The team participated in the Manmohan Memorial National One-day Cricket Tournament held in Inaruwa before traveling to Pokhara to participate in Nepal’s closed camp.

Nepal is preparing for the upcoming home leg of ICC World Cup Cricket League 2 from February 5-12.

The home team will host the United States and Oman in an ODI tri-series.

Both Oman and the US has already announced squad for the series whereas Nepal will announce the final squad on Friday.