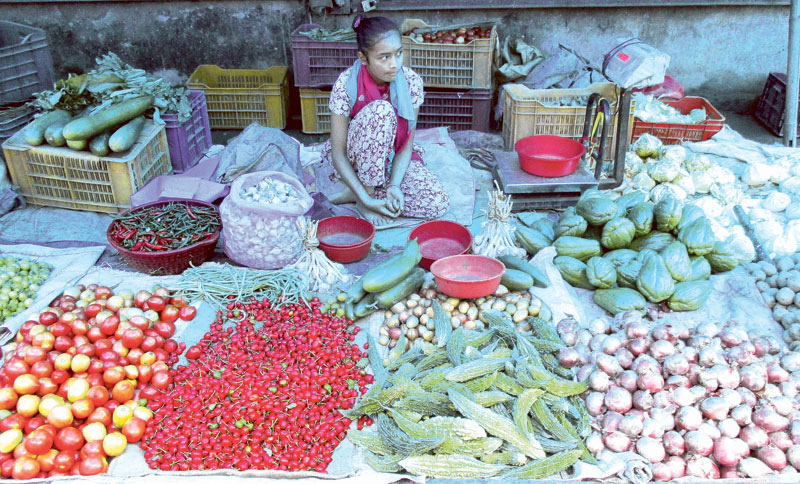 Nepal is one of the lowest pesticide-using countries in South Asia, with current use rate of 142 grams per hectares, while the corresponding figure for India is 400 grams while it is whopping 12-15 kg in Japan and Korea. But this rate applies to pesticide use in all agriculture land. According to Pesticide Registration and Management Division, we import 452 metric tons of pesticides annually, of which 85 percent are used in vegetable farming. We use 1.4 kg of pesticide per hector in vegetables, which is much higher than the pesticide used by the US, most of Europe and South Asian countries on their vegetables.

Despite the government’s claim that it is working to reduce use of chemical pesticides and fungicides in vegetables and fruits, import of these chemicals is increasing. According to Plant Protection Directorate (PPD), 455 tons of pesticides worth Rs 550 million have entered Nepal in 2013-14, a 32 percent rise compared to previous year.

Every December, government agencies and NGOs undertake awareness campaigns on proper use of pesticides, organic pesticides and Integrated Pest Management (IPM). But such campaigns have become nothing more than rituals. Such campaigns, celebrated in Kathmandu, never reach real farmers. In an interview, only one in ten farmers said they had heard of IPM. No wonder use of such harmful chemicals is rampant in central region due to their high concentration of commercial vegetable farms. Farmers in Bara, Chitwan, Dhading and Kavre spray pesticides five to six times a year. They also use extremely hazardous chemicals.

Farmers’ tendency to minimize the time between spraying and harvesting for market supply poses serious threat to consumer health. Some pesticides need dormant time of two to three weeks after spray for safe consumption. But this is not the case in Nepal. Besides, our farmers are still using extremely hazardous chemicals like Methyl-parathion and Endosulphan that have been banned by the WHO.

Our porous border with India has enabled illegal import of banned and low-quality pesticides. We import 30-45 percent of our vegetables from Bihar and Uttar Pradesh where pesticide use is high.

They also contained banned chemicals.  Following this, the government was forced to establish the Rapid Pesticides Residue Analysis Laboratory at Kalimati market in 2014. But lack of skilled technicians, proper equipment and human resources has hampered its smooth functioning.

In 2014, this lab found that 26 of the 187 vegetable samples contained hazardous chemicals.  But our government monitoring mechanism is so lethargic it could not take any action against the suppliers and sellers of poisonous vegetables. This government neglect is proving to be a serious threat to public health.

A case study from Kerala, known as cashew-nut ground of India, has reinforced the risks to human health from chemical pesticides. After 40 years of high pesticide spray in this cash crop, children in several villages have developed congenital abnormalities such as body deformities, loss of eyesight, hole in heart and genital deformity. As the drinking water of the villages was also infected with pesticide and soil polluted with chemicals, large number of elderly population suffer from cancer and endocrine disruption. It has also led to high rates of miscarriage among women. These abnormalities are found at nearly double the rate they are found in other states. According to WHO, 70,000 people succumb to pesticide consumption every year, 10,000 of them in the third world countries. So what can be done?

Our farmers need to be better trained on proper using, handling and fertilizer mixing methods, as well as on banned chemicals, storage period and organic/herbal pesticides. Such orientation should focus on vegetable pocket areas, not Kathmandu. There should be proper scrutiny of imported chemicals at customs points and shopkeepers who sell chemicals should be closely monitored.

Kalimati lab should better coordinate with law-enforcement authorities so that those found guilty are immediately punished. And such labs should be expanded to major vegetable entry points into Nepal and urban markets.

According to health experts, a little stale vegetable are safer for consumption than fresh vegetables.

Also, dipping fresh vegetables and fruits in salt water for few hours or storing them for few days before use makes them less harmful. Mechanical and cultural tools for pest control such as insect trap, crop selection, plant extracts and animal waste (urine, cow-dung) can be used. Predator insects and beneficial microorganisms can also be used in the farm. Household stuffs such as mixture of liquid dish-wash and vegetable oil can also help with the control of many insects and parasites like white fly, spider, mice and fungus. This has already been tested in growing carrot, cucumber, tomato and eggplants.

The chemical pesticides that were initially considered advantageous to farming have proved destructive. It is now up to the government to protect the health of all its citizens.

The author is a professor of statistics at Tribhuvan University

AMESBURY, July 5: Two British citizens are critically ill after they were exposed to Novichok, the same nerve agent that struck... Read More...

Hundreds of stray dogs poisoned in Pakistani city of Karachi

Karachi, Aug 5: Officials have poisoned hundreds of dogs in the southern Pakistani city of Karachi in the latest effort... Read More...