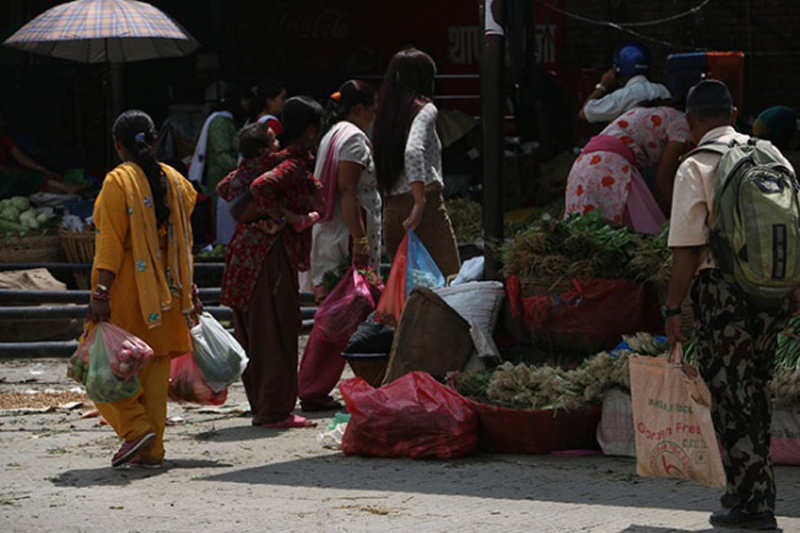 Plastic is non-biodegradable and hence possesses a big challenge to waste management in metropolitan areas
Plastic garbage has exacerbated environmental problems in urban Nepal. We can see ugly mounds of garbage everywhere, mostly comprised of plastic, scattered all over our cities, smothering their beauty. We also frequently find our roads water-logged as plastic clogs drainage. The garbage dumped into our rivers and streams obstruct natural flow of river, causing floods in rainy seasons. Blockade of in-house drainage is also common.

Almost everywhere the culprit is plastic.

Studies show that about 16 percent of urban waste in Nepal is comprised of plastic materials. In 2012 the daily plastic garbage production was about 2.7 tons. This is because these days nearly every household uses large amount of ‘use and throw’ plastic materials like polythene bags, bottles and plastic wrappers. Plastic waste is non-biodegradable and hence poses a big challenge to waste management in metropolitan areas already struggling with solid waste management.

The Ministry of Population and Environment last year had declared a ban on plastic bags. But the ban was ineffective, mainly due to earthquakes. This year again the government has announced a similar ban on plastic bags effective from this month. The ban applies only to plastic and polypropylene materials thinner than 30 micron mostly used to make bags used for shopping.

The ban has also greatly agitated plastic traders. There is more than Rs. 5 billion worth of investment in 200 plastic industries, with the industry employing 20,000 people directly.

Those involved in plastic production are forcing the government to protect their investment and with it jobs. They argue that their industry has legal license, and is approved by the Ministry of Industry. Ban has also worried ordinary households that now have to buy cloth/paper bags that cost Rs 5-10.

Are plastic stuffs really so hazardous? In the developed world, more than 50 percent household materials such as computers, mobile, fridge, television, automobile parts and ATM cards are made of plastic. It is true that population growth, economic prosperity and urbanization leads to an increase in municipal solid waste, especially plastic. Also, as it is not biochemically reactive, plastic can’t naturally degrade. So the problem lies in weak management capacity of municipalities rather than unmanaged volume of waste.

A 2013 study of ADB shows that Nepal has one of the lowest per capita solid waste generations among Asian countries. Kathmandu for instance produces 0.17 kg/capita/day of solid waste, compared to 1.18 kg/capita/day in Bangkok and 0.8 kg/capita/day in Beijing. Bangkok, which is a megacity spread over 1,500 km2 with about 8.5 million people, generates 9,930 tons of solid waste every day, of which about 29 percent is plastic material. Despite this Bangkok is a clean city, much cleaner than Kathmandu.

They are using five steps to manage their huge solid waste.
The steps are: maximum conservation of resources, reuse of waste materials, recycling and processing, energy recovery prior to disposal and final disposal of waste. This hierarchical management system makes the end disposal volume about 20 percent of what was initially collected. This eases burden on our landfill sites, also generating reusable byproducts like manure and fuel and thermal energy. In the city of Phitsanulok in Thailand, collected plastic is converted into combustible liquid fuel that can be used in vehicles.

Nepal does not have the capacity to segregate and recycle waste. According to ADB, less than 30 percent urban waste in Nepal is segregated at the source, the source being households. Paper and glass bottles sold to street vendors are partially reused. About 66 percent of our municipal waste is organic. But the municipality or private NGOs that collect and transport such waste seldom engage in segregation activities. This puts a big burden on landfill sites, which in turn makes local people in these areas rebel against dumping.

Lack of reuse and byproduct generation technology, for instance to convert plastic waste to fuel or thermal power, is our biggest hurdle. Only banning plastic bags is not enough. It is for the safety and happiness of common people that governments make laws. If plastic is creating a threat to the life of people, the industry which produces it should be banned.

However, the government should also offer alternatives to this industry and their consumers. For instance it can help the plastic industry convert into a paper-bag industry.

Likewise, it can provision for cheap disposable shopping bags for consumers.

The author is Professor of Statistics at Tribhuvan University

A whale has died in southern Thailand after swallowing more than 80 plastic bags, with rescuers failing to nurse the mammal back... Read More...

Laxmi is restless and does not stay in one place, so by lighting diyo we try to lure her into... Read More...

First governor of NRB passes away
10 hours ago