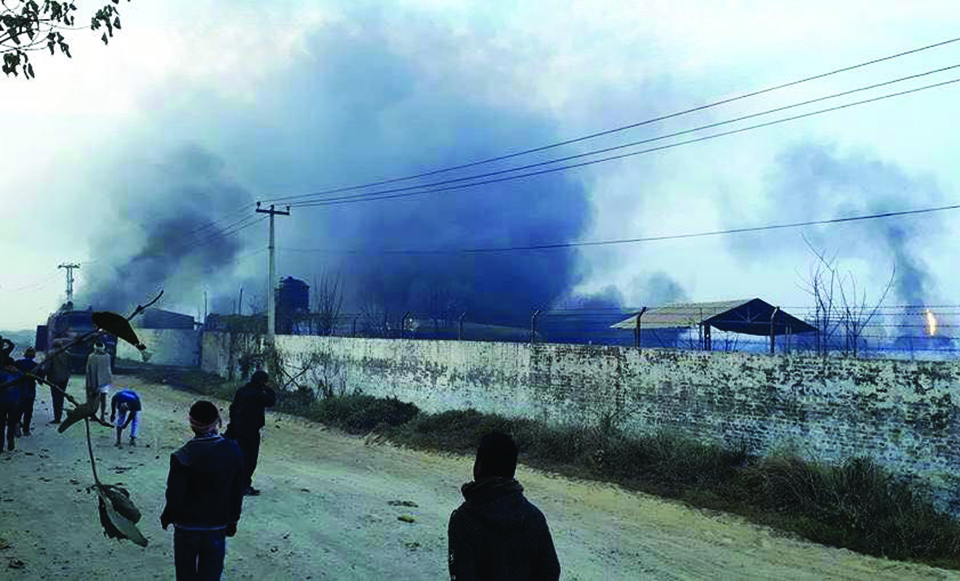 Urban development has been more or less an unplanned and erratic process in Nepal. Planner’s attitude is ‘infrastructures centric’ rather than ‘public centric’. Haphazard permission for making tall buildings, roads without sidewalks, lack of zebra-cross and traffic lights, encroachment on open public spaces, lack of sewage management are examples of our erratic development pattern. All this has put public safety at high risk.

One example of such accidental development is the existence of inflammable and hazardous plants or factories at the middle of a dense human settlement. LPG filling plants, plastic factories and chemical factories are risky if they are amidst human settlements. There are laws and regulatory provisions to prevent this but due to indifferent attitude of the government authorities responsible for monitoring and supervision, cities of Nepal are becoming riskier.

As urbanization is getting momentum, settlements are getting dense day by day, increasing the life threat. We are lucky that only minor causalities have occurred so far. But if we do not work to avert the risks, we will face deadly situations in the days to come. Besides, our fire protection system is one of the weakest with limited and old fire trucks, narrow twisted roads and unavailability of fireplugs.

Incidence of fire and death from it has increased in the past few years. In December 2017, fire broke out at Super Gas Industry at Birgunj that killed two persons and injured six. In October 2017, fire broke at Balkhu Kathmandu destroying more than 40 houses. The fire was sparked by traditional oil lamp but it caused explosion of 15 LPG cylinder stored in the nearby storage.

A year ago in 2016, LP gas blast at Hetauda seriously injured 70 persons. In April 2017, fire broke out at a restaurant at the dense area of Kapan, Kathmandu damaging property worth Rs 500,000. A massive fire broken at CG warehouse at Satungal in October 2012 destroyed property worth about Rs 3 billion. The burning factory was a great threat to the nearby settlements for many days.  In November 2017, fire exploded at a workshop adjoining a petrol pump at Tripureswar. Luckily the petrol pump was saved by firefighters otherwise many people would have died.

We have to learn from incidents around the world how large scale destruction can be caused from the presence of such explosive factories near dense settlements. Union Carbide plant explosion at Bhopal India was one such bad tragedy. In December 1984, deadly gas leaked from the Union Carbide plant  in which about 4000 people died and about half a million lives gravely affected.  In the same year, a large LP gas storage at Mexico City exploded killing more than 600 and seriously injuring more than 7000.
Separate Industrial Area or Industrial Zones such as at Balazu, Patan and Hetauda which were allocated only for industries and established far from the settlement area were in existence in the past. This good concept of industrialization has now been forgotten due to privatization, introduced around the mid 90s.

With ever increasing use of LPG by householders the filling factories are making inroads even at the middle of human settlements. Nepal Gas, one of the largest LPG plants, at Balaju lies close to crowded settlement. From Naubise of Dhading to Mugling there are 30 LPG plants and petrol pumps including LPG plants like Sugam, HP, SCT, Shree, and Shreekrishna.

Most such plants are located near the villages or along the highway. At Banepa, there are six to seven such plants within 300. In Chitawan, Dhading, Kavre, Bara, Parsa, Morang, and Jhapa such plants have nearly outnumbered human settlements. We can also find a highly explosive aviation fuel inventory at Sinamangal which is very near to a big hospital and a crowded settlement. There are dozens of chemical and plastic industries at core city areas of Satungal, Kathmandu, Bhaktapur and Lalitpur which are also generating air and water pollution along with harmful solid wastes.

Of course these industries are responsible for creating risks to human lives but they have done so also because our government authorities are weak. There are strong laws to manage such risky establishment. According to LP Gas By-laws (2008), “no gas plants can be established at five kilometers radius of human settlement.” There are similar laws and regulations for NOC and Nepal Bureau of Quality Control. These laws are rarely implemented.

The government should prohibit establishment of gas plants along the highways or places near the human settlements. If factories are established at an isolated place, the government should not allow human settlements near such places. All such risky establishments, if any, should be relocated. This should be the responsibility of the local governments at the moment. Local elites should also raise voice. We need to properly regulate LPG filling plants, plastic factories and chemical factories before we meet with another tragedy.

The author is a Lecturer at Department of Statistics, TU