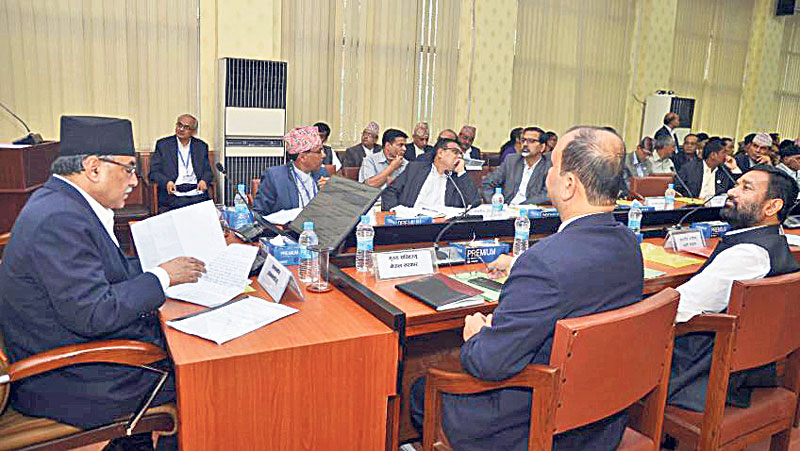 KATHMANDU, Sept 13: Prime Minister Pushpa Kamal Dahal has announced that he will personally take stock of all the national pride projects.

Addressing the 37th meeting of National Development Action Committee (NDAC) on Monday, the premier, who also chairs the National Planning Commission (NPC), said that he would personally monitor the national pride projects.

Stating that the past fiscal years have seen low budget spending -- especially the development budget that is expected to create employment and contribute to capital formation, Dahal directed the ministers and the secretaries to create an environment to ensure that development projects are completed in time as per the schedule. "If the projects are not moving forward as per the schedule, apply carrot and stick policy," he told ministers and secretaries.

Annual average spending over the past decade stands at around 70 percent also due to weak governance, age-old administration, political transition and inefficient bureaucracy.
In the last Fiscal Year 2015/16, the government was able to spend only around 50 percent of the development budget.

Asking the ministers and the secretaries to take action against those who are responsible for delay in projects, PM Dahal directed them to identify those, who spend 11 months of the year without doing anything, and spend haphazardly on the 12th month, and punish them accordingly.

Last moment spending has been a repeated trend in Nepal. It not only encourages misuse of resources, but also leads to corruption.

Until policy reforms, depoliticization of the bureaucracy, enhancing of institutional capacity and restructuring of administration can be achieved, the government, especially PM Dahal, should take a lead role in expediting development projects under his personal initiative, say experts.

In the last fiscal year, the government was able to spend 56.30 percent despite huge reconstruction work expected due to the devastating earthquake of 2015. According to the Financial Comptroller General's Office, the government had spent 71.47 percent, or Rs 585.65 billion, of the total budget of Rs 819 billion in the last fiscal year. Among them, the status of the national pride projects was pathetic.

Either Nepal has to address development projects on a war footing now or remain poor, under developed and paralyzed. In the current fiscal year too, the government has been able to spend only 3.86 percent of the total budget by the end of the second month.

On one hand the government is unable to spend the development budget and on the other, most of the spending has been on unproductive sector that can neither generate employment nor help capital formation. It has only helped in cost escalation of development projects, pulling the economic growth down. In the last fiscal year, Central Bureau of Statistics had projected the economy to grow by only 0.77 percent.

Delayed development projects have not only been holding the country back, but also adding to economic costs for the people. The weakness of the planning commission and also the various ministries in effectively monitoring development work is going to cost not only the economy but also social progress, as scarce and precious resources are misused in the last months every year thereby encouraging financial indiscipline and recklessness.

The delay in development projects is also due to negligence in monitoring and evaluation, and this has to be looked into seriously, PM Dahal said, asking the bureaucracy and ministers to make sure that the capital budget meet the 80 percent spending target.

Dahal also asked the secretaries and ministers to be present in the meeting with complete homework on how to expedite development projects.

Currently, the Office of the Prime Minister and Council of Ministers looks after mega projects whereas the Finance Ministry looks after projects with outlays of above Rs 150 million. The ministries concerned are also responsible for monitoring development projects apart from the National Planning Commission. Likewise, the parliamentary committees, especially the Development Committee, also take stock of the development projects.

However, many say that parliamentary committees are obstructing development projects rather than facilitating them.

Almost all the development projects are either running behind schedule, thereby escalating costs, or have shown little progress due to not only political instability but also lack of regular monitoring by the respective departments, ministries, National Planning Commission, and the Office of the Prime Minister and Council of Ministers.

KATHMANDU, July 30: The Ministry of Culture, Tourism and Civil Aviation, Jitendra Dev, has said that the construction of the... Read More...

No one can become PM by making noise: Dr Koirala
55 minutes ago