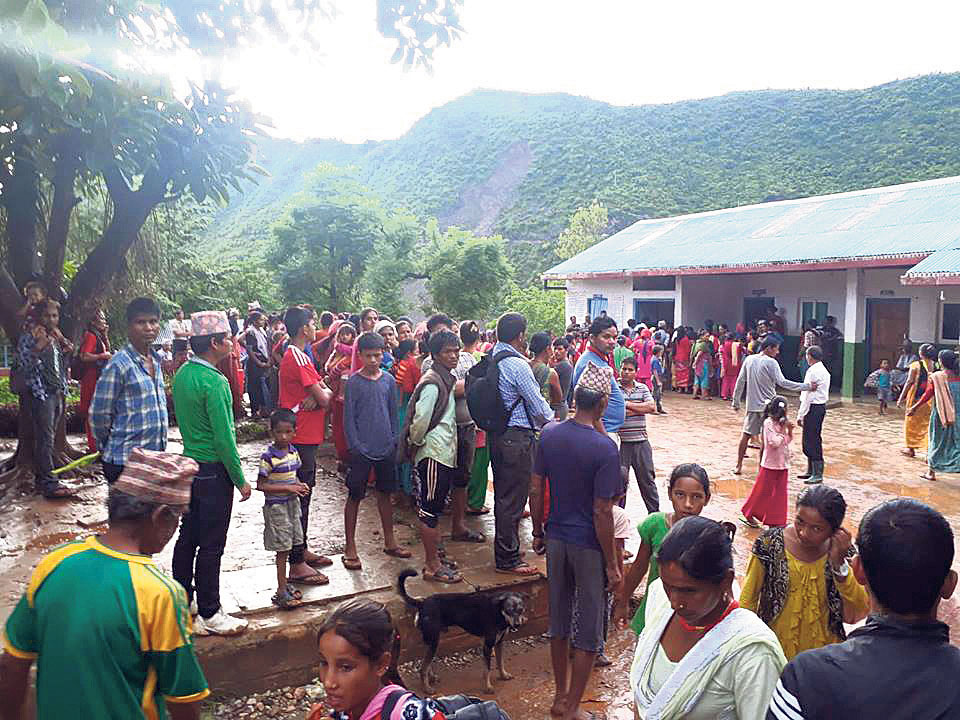 Protesters at Chaujahari Hospital on Tuesday.

NEPALGUNJ, Aug 8: The memory of security personnel firing bullets inside the hospital while forcefully taking away agitating Dr Govinda KC to Kathmandu had just started to fade when a similar incident has been repeated in Chaurjahari Hospital of Rukum.

Police on Tuesday fired shots in the air along with nine teargas shells within the premises of Chaurjahari Hospital. Family members and relatives of a patient who died in course of treatment in the hospital were staging protest when the police fired in the air to take the situation under control.

Tensions ran high in the hospital after Yasoda Malla, 29, of Bheri Municipality-13 died while undergoing treatment on August 4.

Dhan Bahadur Malla, father of the deceased, has accused the health workers of forcefully giving an injection to his daughter.

"That injection didn't even take five seconds to kill my daughter," said Malla, adding, "They used the wrong injection for a normal patient."

According him, Yasoda was refusing to take the injection fearing that it might kill her. The family members have blamed doctors' negligence for the death of the patient. As per a statement issued by the family, the hospital had mentioned that Yasoda had a 5mm stone in her kidney.

Coordinator of the District Security Committee as well as Chief District Officer Shambhu Prasad Regmi informed Republica that police were obliged to fire teargas shells to stop the protesters from vandalizing the hospital. He stated that the hospital would have been badly damaged if the police had not taken efforts to disperse the crowd.

Seven days ago, Yasoda was admitted to the hospital after complaining of problems in her abdomen. Initially, it was reported that she had kidney problems. However, she died mysteriously soon after being given the injection which reportedly caused rapid heartbeat. Meanwhile, doctors involved in her treatment claimed that they did not use the wrong injection and said that the hospital is ready for investigation if needed. They have stated that they are ready to bear the punishment if found guilty.

Four security personnel were injured in the clash with the protesters. They have sustained injuries in their backs, heads and limbs. They are currently undergoing treatment in the same hospital. Protesters vandalized the registration area, assembly hall, ward and solar panels of the hospital, according to a local Gopal Regmi.

The clash between the protesters and the hospital authorities had created fear among other patients and health workers as well.

"We felt unsafe and were unable to treat our patients peacefully," said Dil Bahadur Giri, chief of the hospital administration. He also claimed that police did what was required, as they could not risk the lives of other patients.