No more hassles along Naryanghat-Mugling road 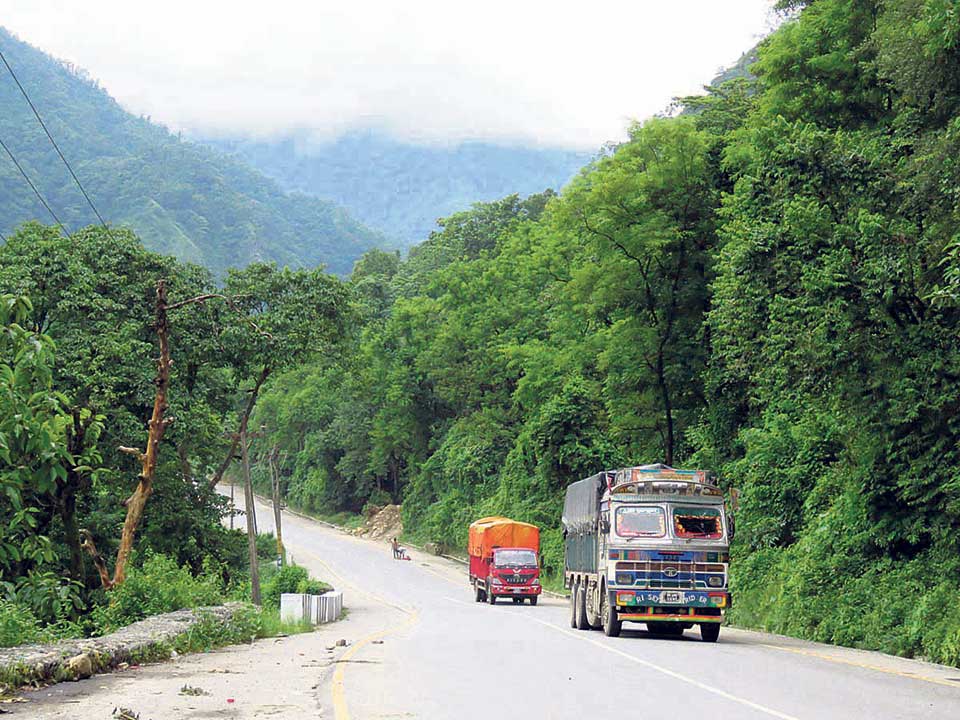 CHITWAN, Nov 24: Rajendra Tandukar of Kathmandu is quite familiar with Narayanghat-Mugling road section. He was just 24 when he started driving along this route. Now, he is 50. Initially, he drove a company’s vehicle. These days, he has been driving Kathmandu-Chitwan route everyday on his own vehicle which he purchased 12 years ago.

Normally, a one-way trip from Kathmandu to Chitwan takes around five hours. But once the Narayanghat-Mugling road widening project kicked off, things turned very tough for him. The time taken to cross the road section became unpredictable. “Sometimes, you could cross the block in three to four hours, sometimes it could take an entire day. Nothing remained sure and certain,” he reminisced.

Due to the frustration over the road condition, Tandukar even thought of giving up his profession. Amid dilemma, he kept on driving anyway.

“Earlier, I could easily complete a return trip a day. But after the road widening process begun, I could hardly finish even one trip. It caused not only losses in businesses, but it was also about risking one’s life. The road was so dangerous,” he said.

These days, Tandukar crosses the Narayanghat-Mugling road block within 45 minutes. The road is very smooth.

“Now we have got rid of the dust, potholes, and traffic jams. There is even no danger of landslides as for now,” he said with a smile.

Passengers have also heaved a sigh of relief. Completion of the road widening project has put an end to hours of traffic jams and hassles along the way.

The highway was constructed with the support of the government of China in 1980. The road widening process had started in April 2015 and was expected to be completed in two years. But the great earthquakes hit the country the same month, delaying the works. And soon, India imposed an undeclared economic blockade on Nepal. This not only affected people’s normal life but also hit the development projects. Even in such condition, the project did not halt.

“When the blockade was imposed, nine percentage of work was done. We continued working as the road was not as busy as before. We brought fuel from Thori and started doing the toughest job -- blasting the rocks,” informed project engineer and spokesperson Shiva Khanal. “We took the period of blockade as an opportunity actually.”

Around 10,000 vehicles pass through the road on a daily basis. So, it was not possible to expedite the widening unless vehicles were stopped for a few hours.

“So, when the project was going on, vehicles were stopped for even six hours. That was necessary to complete the project,” Khanal said.

Before the widening of the road, it used to take one hour 10 minutes to cross the road block. Now, after the completion of the project, it takes 45 minutes according to Khanal.

Even though the road is not complete, the bridges are yet to be replaced. There are 18 motorable bridges along the block. And those need to be widened. But the construction of only four bridges is underway.

Safety concern is one of the important features of the project. In the view of regular accident along the way, rumble strips have been fixed at both ends of all the bridges. As soon as vehicles reach the bridge, a rough noise can be heard. This alerts the driver to slow down the speed.

According to the project chief Rohit Kumar Bisural, the safety measure was fixed to alert the drivers. “When the noise alerts the drivers, they become less prone to accidents. Those strips were fixed for this purpose,” he said.

CHITWAN, July 26: Tourism entrepreneurs in Chitwan are extremely worried these days. The flow of tourists is declining everyday due... Read More...