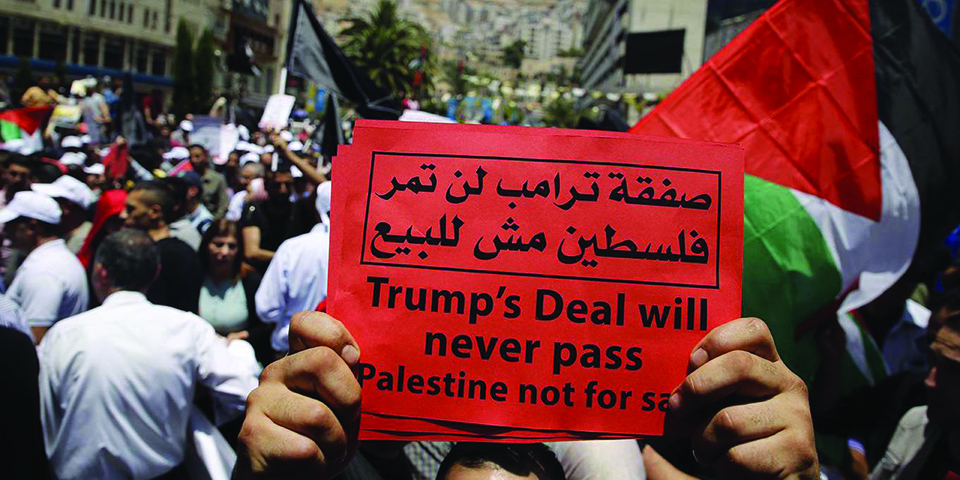 TEL AVIV – Last month, US President Donald Trump’s son-in-law and senior adviser, Jared Kushner, unveiled an ambitious plan to strengthen the Palestinian economy, in the hopes that billions of dollars in investment will open the way for an Israeli-Palestinian peace settlement. But, far from being the “deal of the century” that Trump has called it, the so-called Peace to Prosperity plan is divorced from reality—and doomed to fail.

The notion that economic carrots can convince Palestinians to accept Israeli supremacy has a long pedigree. British Prime Minister Winston Churchill, some early Zionists, and even local Arabs argued decades before 1948 that the Zionist enterprise was in the economic interest of the indigenous population.

More recently, Israel’s right-wing Prime Minister, Binyamin Netanyahu, took up the mantle of “economic peace.” In 1988, he argued that rapid economic growth would give ordinary Palestinians a “stake” in peace and would “support and bolster the achievement of political settlements down the line.” There is, of course, nothing wrong with the promise of economic prosperity; but, coming from Netanyahu, who has never offered a convincing political deal, such a plan could never be credible to the Palestinians.

Now, the Trump administration is attempting to realize this vision. Essentially a Marshall Plan for the Middle East, the Peace to Prosperity proposal aims to facilitate up to $50 billion in new regional and international investment in the Palestinian economy over the next decade. The Trump administration contends that this should also boost the economies of Egypt, Lebanon, and Jordan, all of which are directly affected by the Israeli-Palestinian conflict.

Yet Kushner’s plan fails to mention, let alone address, some of the highest barriers to economic development, such as Israel’s arbitrary use of Palestinian natural resources and its security checkpoints, which stymie free movement and raise the cost of transportation. For Peace to Prosperity to deliver the results the Trump administration promises, such barriers would have to be dismantled.

But that still wouldn’t be enough to convince the Palestinians to accept the plan, for a simple reason: the Palestinian national movement remains in its revolutionary phase, when economic considerations always come second to political aspirations. This has been the case even for wealthy Catalonia, where the flight of over 3,000 companies has failed to weaken public support for the separatist cause. The offices of Palestinian Authority President Mahmoud Abbas and his predecessor, Yasser Arafat, were adorned, when I visited, with images of Jerusalem’s Al-Aqsa Mosque (Islam’s third-holiest site) and maps of occupied Palestine, not with photos of John Maynard Keynes or Jean Monnet.

These priorities have been reflected in policy. In February, for example, Abbas chose to risk economic collapse, rather than accept the tax revenues that Israel collects on its behalf, which comprise 63 percent of the Palestinian government’s budget. Abbas was protesting Israel’s unilateral decision to deduct about  five percent of the total against the amount the PA pays in stipends to the families of Palestinians convicted of terrorism and serving time in Israeli prisons.

Through 52 years of military occupation, two society-shattering intifadas, and the devastating collapse of two peace plans that seemed set to offer redemption, the Palestinians’ fundamental demands have never changed. They want a two-state solution based on the pre-1967 borders, which includes the right of return for sizeable numbers of Palestinian refugees. And, in fact, an independent Palestine, free to trade with the Arab world and Europe, would secure revenues and GDP growth that far exceed what Kushner’s plan would bring.

For the Palestinians, accepting an economic deal that is not an annex to a convincing political solution would be tantamount to betraying Palestinian refugees—and, indeed, the dream of statehood—for a fistful of dollars. But that does not mean that they should reject it outright.

The Palestinians have rejected many peace plans, most of them far more reasonable than Kushner’s. What they have not done is engage the international community with a comprehensive counterproposal. Their offer—which would have to go much further than the 2002 Arab peace initiative or a portfolio of relevant United Nations resolutions—could even incorporate the Kushner plan as part of the transition to a final settlement.

In the past, transitional agreements have amounted to what George Orwell called “catastrophic gradualism.” But, with the inclusion of a robust economic strategy, this could be transformed into “auspicious gradualism.” After all, economic development would go a long way toward stabilizing Palestinian society in preparation for statehood, drastically boosting the peace settlement’s chances of long-term success.

In 1923, none other than the founder of the Zionist right, Ze’ev Jabotinsky, called it a “childish fantasy” to believe that the Palestinians would “sell out their homeland for a railroad network.” That has not changed. But, rather than rejecting such payoffs outright, the Palestinians should make an offer of their own, thereby recovering the diplomatic initiative in a world that has largely lost interest in their cause.

JERUSALEM, Aug 23:  An explosion Friday near a West Bank settlement that Israel said was a Palestinian attack killed a... Read More...