Nepse records its best weekly gain in over 20 months 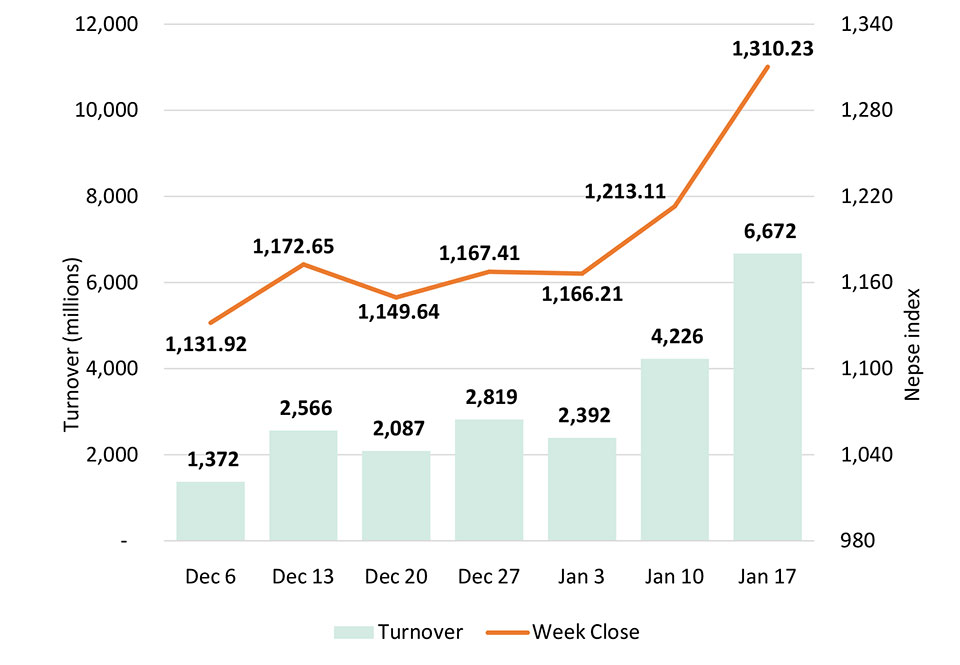 KATHMANDU: Stocks witnessed significant strength since the very beginning of the week. The Nepal stock Exchange (Nepse) index shot up by 42.61 points on Sunday stretching its gains to Monday's trading where the index added another 15.14 points.

Following a correction of 7.48 points on Tuesday, the index rallied 20.85 points on Wednesday and 26 points on Thursday. Consequently, the index added 97.12 points or 8.01% in its best week since May 2018. After a 47 points surge in the bourse in the week earlier, bulls are showing no signs of slowing down.

Heavy buying pressure was seen in almost all of the traded sectors reflecting investors' upbeat sentiment. The massive gains that came in the previous months have kept investors glued to the stock market where gains from trading are being poured back into the market. Weekly transaction amount also reached multi-year high. This week, the stock market saw a turnover of Rs 6.67 billion compared to Rs 4.22 billion in the week earlier.

Sensitive Index, which gauges the performance of Class 'A' stocks, also climbed over 7% higher. Investors continued to show high enthusiasm in taking long position in all traded segments. Trading sub-index shot up by almost 30% as shares of Salt Trading Corporation continued to make new highs. Finance and Life Insurance stocks also saw considerable strength with the respective sub-indices rallying 13.66% and 12.29%.

This week more than Rs 72 million unit shares of Global IME Bank Ltd were listed in the exchange after conversion of Janata Bank Ltd's shares. Both securities were suspended for trading since early July after the merger agreement between the two commercial banks.

The shares will start trading this week but the opening range is yet to be confirmed by Nepse. In another merger and acquisition (M&A) news, Kumari Bank Ltd is set to acquire Deva Bikas Bank Ltd. Following the agreement on January 14, trading of the latter's shares has been halted in the exchange.

As per the ARKS technical analysis, the market formed a massive bullish marubozu candlestick on the daily time frame indicating substantial buying pressure in the bourse throughout the week.

Following the advance, the index has almost reached its previous year's closing high of 1,320 points hit in late May, 2019. Weekly technical indicators suggest possibility of further upward movement in the coming weeks given the 1,300 points level is maintained. However, investors should remain cautious of some correction following two weeks' massive rally.