‘Nepalgunj–Delhi flight could be a game changer for Province 5’ 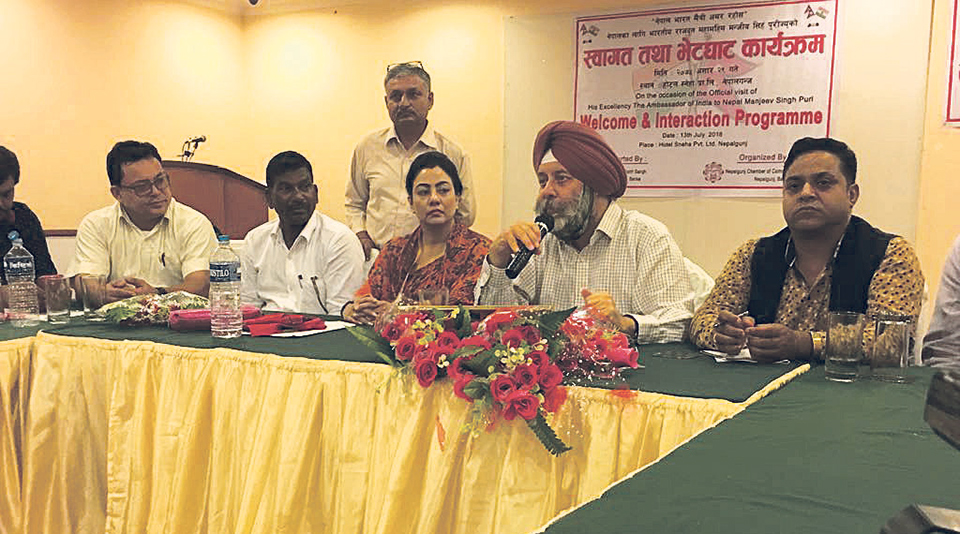 Indian envoy to Nepal, Manjeev Singh Puri, and FNCCI President Bhawani Rana, among others, at an interaction organized in Nepalgunj on Saturday.

KATHMANDU, July 15: Nepali industrialists hope that direct air link between western Nepali town Nepalgunj and Indian capital New Delhi would be a game changer for the economic development of Province 5.

At a meeting organized in Nepalgunj on Saturday by Nepalgunj Chamber of Commerce and Industry (NCCI), they said the direct flight would boost trade connectivity between Nepal and India.

According to a press statement issued by FNCCI on Saturday, president Rana said that the Nepalgunj–New Delhi flight would be the entry point for the Kailash Mansarovar tour, which is popular among Hindu devotees of India.

“This flight can contribute toward development of the entire province,” Rana said. “Connectivity plays a major role in trade relation between the two countries. It will allow Nepal to benefit from the economic development of India.” She further stressed on the need for direct air connection between other major cities of Nepal and India.
Likewise, during upcoming Nepal-India Investment Conference, Nepal will have a detailed discussion with Indian officials regarding joint investments, cooperation on development infrastructure, and development of agriculture and tourism sectors of the country, she added.

Industrialists suggested that tourism infrastructures and packages should be developed and promoted in view of attracting Indian tourists into Nepal.

Responding to the industrialists’ views, Ambassador Puri said that he will try his level best to support Nepal on behalf of his government for the infrastructure development of Nepalgunj. “After the beginning of Nepalgunj–New Delhi flight, Nepalgunj will be the major entry point for Indian tourists travelling to Kailash Mansarovar,” he said. “We will do our best to support efforts to make this sector tourist friendly.”
Nepal’s private airline company Buddha Air has received flight operation permission from Civil Aviation Authority of Nepal (CAAN) for Nepalgunj–New Delhi flight.