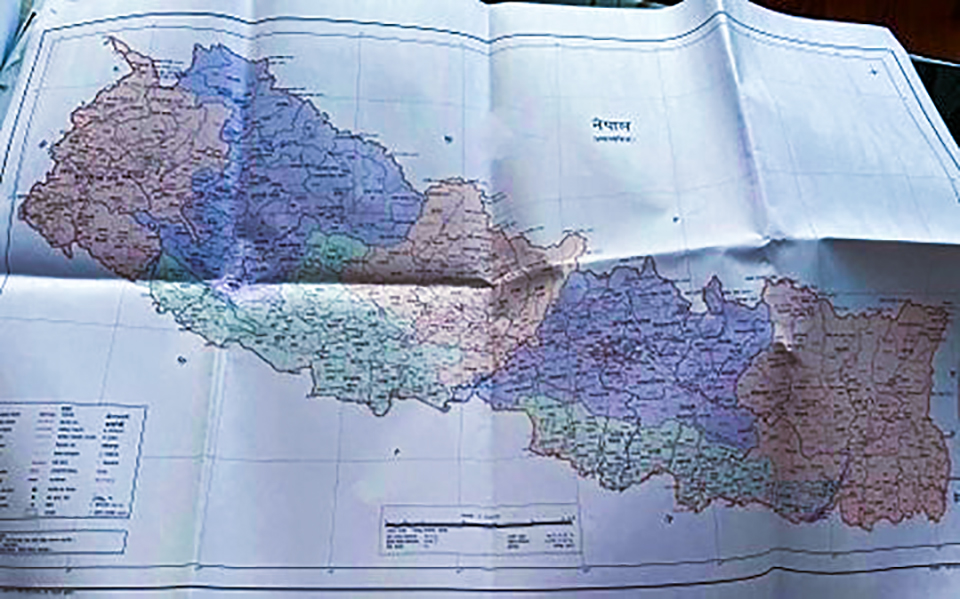 KATHMANDU, May 19 : The government on Monday endorsed a new political map that includes Kalapani and Limpiyadhura territories that are currently controlled by India. A cabinet meeting held at the official residence of the Prime Minister in Baluwatar took a decision to this effect.

Minister Khatiwada said that the government also decided to initiate diplomatic efforts to resolve the Nepal-India border dispute following the endorsement of the new map.

The government, while presenting its annual plans and policies for the upcoming fiscal year 2020-21 on May 15, had committed to issue a new map of Nepal incorporating the encroached region of Kalapani, Lipulekh and Limpiyadhura. “The Government of Nepal is committed to safeguarding the international boundary of Nepal. Inspection of the international boundaries will be given continuity. Years-long border issues with the neighboring India will be resolved based on historical treaties, maps, facts and evidence through diplomatic means,” reads the government’s policies and programs presented by President Bidya Devi Bhandari at the joint meeting of the federal parliament. “Limpiyadhura, Lipulekh and Kalapani regions belong to Nepal and a concrete initiative will be taken to retrieve these regions. A new map will be issued by including the missing territory.”

According to sources, the government took an aggressive move following the statement made by the Indian Army Chief General MM Naravane on Friday accusing Nepal of raising the Lipu Lekh issue at the behest of someone else.

The new map has retrieved 335 sq km of encroached land. Gunji, Nabhi and Kuti villages have been included within the Nepali border. The present map in practice, issued in 2032BS, does not have 335 sq km of the Limpiyadhura region.

Earlier, the Department of Survey had prepared the map including those territories and submitted it to the Ministry of Land Management. Technicians at the Survey Department had prepared the map with accurate scale, projection and coordinate system. “This map has included all the Nepali territory as mentioned in the Sugali Treaty of 1816,” said a technician at the department.

The department had also provided factual evidence including a map drawn during the Treaty of Sugauli, another map brought from London, receipts of payment of land revenue and the order issued by the then Prime Minister Chandra Shumsher, to the ministry. One of the high-ranking officers at the department said, “Collecting proof is an important task, which we have successfully accomplished.”

The government had been under pressure to issue the new map by incorporating the territories encroached upon by India since the southern neighbor unveiled its new map placing Nepali territory of Kalapani inside Indian borders.

Indian home ministry released the political map placing the Nepali territory of Kalapani inside the Indian borders after creating Jammu and Kashmir and Ladakh as its union territories.

The State Affairs and Good Governance Committee under the House of Representatives had issued a written directive to the government on November 11 to issue a new map including the encroached territory. Another meeting of the committee in the Nepali month of Baishakh had also sent a directive to the government to publicize the new map claiming that the Limpiyadhura region is the source of the Mahakali River- the Nepal-India border as stated in the Sugauli Treaty.

Kalapani region extends over an area of 60 sq km. The territory including Limpiyadhura covers 335 sq km. It means a total of 395 sq km of land has been incorporated in Nepal's map which has been encroached by India for decades.

A committee formed under the leadership of a former Chief Commissioner of the Commission for Investigation of Abuse of Authority had also submitted a report along with Nepal’s complete map some four years ago. The report had also claimed the Limpiyadhura region as the source of the Mahakali River.