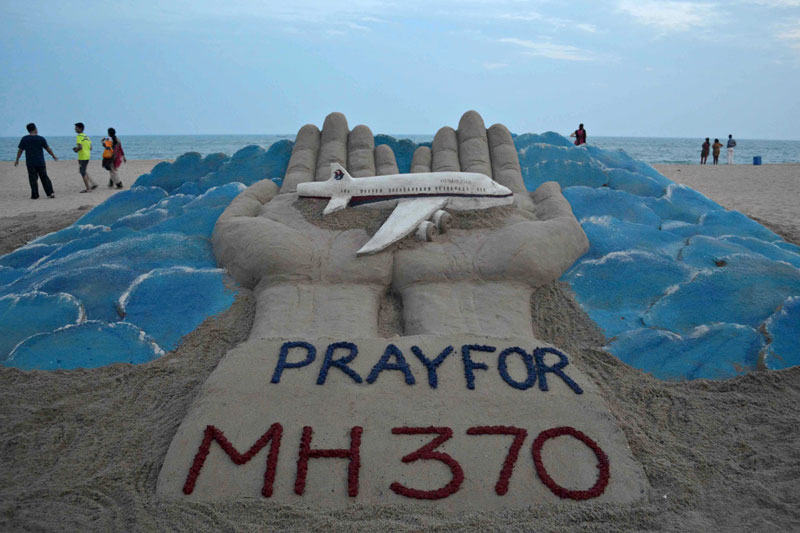 Prolonged action of sea water, constant exposure to sun and changing weather will have corroded many of the aircraft parts, which only adds to the challenge
The search for the Malaysian Airlines Flight 370 (MH370) that disappeared on March 8, 2014 continues. The prolonged search involving Australia, China and Malaysia has not been cheap and nothing substantial has been achieved so far. From another angle, searching 120,000 sq-km of sea (a task which could be completed by January-end) can be considered an achievement in confirming that there are no aircraft remains in the area. But individuals have found parts, washed ashore, as far as Reunion Islands and Mauritius and even on the beaches of Madagascar. A devoutly committed American volunteer, Blaine Gibson, spending his own savings, has perhaps achieved more than the tripartite team. With utter dismay at the lack of progress Grace Nathan, one of the crash victim’s daughter, has even initiated a self-funded search mission called ‘Members of Voice 370’.

Incidentally, it was Nathan’s talk about her missing mother in Kuala Lumpur that made Gibson jump headlong into his solo-search mission.

Circumspection in this issue is justified. The sea carries innumerable varieties of floating objects and most of those are washed ashore. The found parts will have to be matched against the parts of a Boeing 777. Since no other B777 is missing, chances are that if its parts are found it could be from MH370. That will also be the case if parts of fuselage showing distinct airline logo or colour pattern are found. But prolonged action of sea water, constant exposure to sun and changing weather will have corroded many of the airline parts, which only adds to the challenge.

The vast blue sea that covers three fourth of the Earth’s surface has swallowed, so to say, a big aluminium whale. Incidentally, blue is also symbolic of pain and suffering. Flying creates a sense of excitement and even a varying degree of trepidation for its passengers. But it carries an ominous undertone if the medium changes from “sky blue” to “deep blue”. Anyone who hears about aircraft gone missing over sea prays for a miracle and wishes that everyone comes out alive and unhurt.

Hope remains alive even as hours turn into days, then months and even years, without any knowledge of the loved ones.

The family members of those missing should be in that state of mind even if it has been over two years since the aircraft went missing. Too much has been speculated upon and written about this tale. The search goes on but signs of fatigue are evident as the sunken fuselage is still missing.

Even though no one puts it as explicitly, the main reason for this fatigue is financial. The three counties are tied up with the search for different reasons: Malaysia for owning the flag carrier, China for having maximum number of passengers on the doomed flight, and Australia for the proximity of the suspected crash site.

It was openly hinted that the search may soon be “suspended”; that does not mean “termination”, they hastened to add some months ago. Now they are openly acknowledging that perhaps they have been looking in the wrong place after all. The sudden admission about the probable spot being north of the current search area was prompted by the “reverse drift” analysis. It means tracing back the route to the spot the aircraft parts began drifting from. This is complicated as it requires input of data related to ocean current, wind speed and wind direction, etc. It is also hard to be precise in this inherently dynamic environment.

Leaving MH370 aside, let’s see what happened in the search of a relatively small, military transporter aircraft that went missing between Chennai and Port Blair, 45 minutes after taking off with 29 on board on July 22, 2016. It was the Russian-built twin engine turbo-prop AN32 of the Indian Air Force. The total flight time for the 750 nautical mile flight was estimated at about three hours. That means the aircraft would not even have covered one fourth of the distance when it vanished. This happened in broad daylight and the probable crash spot should have been well within 180nm from Indian shores. But despite a massive search with the deployment of 17 ships and seven aircrafts in the probable area it remains untraced.

The radar data showed it making a sharp left turn before rapidly losing altitude. The irony, in this case, is that despite India’s claim to a “regional power” status it has failed to find an aircraft so close to its shores. It seemed to have discontinued search efforts in early October, after less than two months. All of those who perished may be military personnel or their family members, yet that does not mean the living family members don’t deserve to know about their missing loved ones. At least the search for MH370 is still on.

A sea search is difficult, as has been seen in both the above cases. It should not have been too difficult to find AN32 because the search area was small, unlike in the case of the vast search area for MH370. The Malaysian B777 is a complicated case because of the sudden switching off of its transponder and its as sudden change of flight track. Let us hope that the search in the new area to the north of the possible crash site does not bring more disappointment.

The author is a frequent contributor on aviation issues

KATHMANDU, May 15: As India treads a fine line between Kathmandu and Madhes, the Madhes-based parties face tough choices on the... Read More...

Violence against women sees spike in Suklaphanta Municipality
28 minutes ago