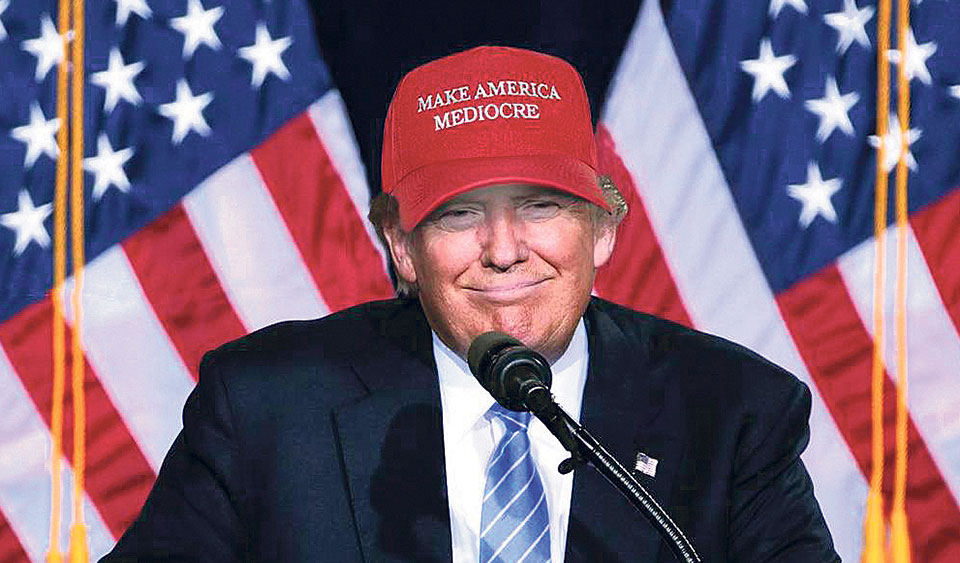 The current economic-policy environment has not made America great again
WASHINGTON, DC – The private sector performs well when firms can compete on a level playing field. But if the state is willing to influence market outcomes for individual firms, politically connected parties can gain an advantage over their more efficient competitors.

The US economy has long been among the most productive in the world precisely because it has maintained a relatively level playing field, where firms’ costs are determined by how efficiently they respond to market signals. Likewise, the US approach to international trade has long been based on predominantly economic considerations. Because parties to the World Trade Organization had agreed that tariffs could not rise above negotiated levels except in specified circumstances (on national-security grounds, for example), governments could not use such measures to reward or threaten particular firms or industries.

Yet under US President Donald Trump, this is no longer the case. In March 2018, Trump invoked “national security” to justify new import tariffs of 25 percent on steel (and 10 percent on aluminum). While that rationale could be valid in some cases, this was not one of them: the US steel industry was operating at around 73 percent capacity, with just three percent of steel and aluminum production needed for defense.

Moreover, when announcing the tariffs, the Trump administration stipulated that companies wanting to import domestically unavailable steel could apply for a waiver, meaning that the government would have the discretion to grant tariff “exclusions” to some firms while denying them to others.

Under this system, each waiver application must specify the type and quantity of steel needed, including “chemical composition, dimensions, strength, toughness, ductility, magnetic permeability, surface finish, coatings, and other relevant data.” A separate application must be made for each type of steel, and applicants must demonstrate that the type of steel needed is not available domestically. Given that there are nine separate criteria (plus other relevant data), the decision-making process for granting waivers is inherently opaque.

Once a waiver application is submitted, it is “posted” publicly, giving domestic steel companies seven days to object, on the basis that they can in fact furnish the type of steel in question. Their objections are then subjected to a seven-day review period. If the original applicant rebuts the objection, the objector has another seven days to rebut the rebuttal.

As of March 2019, the government had received 51,345 requests for waivers and 19,543 objections. Delays had piled up, and commentators pointed out that a disproportionate share of the objections had come from just three US companies—US Steel, Nucor, and AK Steel—and applied to a volume of steel 169 percent above their combined capacity. As of September 2018, the average number of waiver requests per firm was 43, with one firm filing as many as 2,563. After almost a year, the Department of Commerce had approved just 59 percent of applications with no objections, and under one percent of those with objections. Although national security had been the purported rationale for the tariffs, far more imported steel from China received exemptions than did steel from Canada or Mexico.

Not surprisingly, this process has drawn multiple complaints. Even the Commerce Department Inspector General (IG), for example, has found that the system relies on “an unofficial appeals process” and may be subject to “improper influence,” given that procedures have been altered after an objection, and that there has been inadequate documentation of meetings and phone calls with interested parties. Perhaps worse, different companies applying for exemptions for the same type of imported steel have experienced different outcomes.

If some companies’ requests are accepted while others are not, those with waivers will have a de facto cost advantage over other firms. Clearly, the playing field is uneven, given that there have been enough complaints to trigger an IG investigation. According to Reuters, one US can maker has received a waiver for its imports while others have faced denials and delays.

But tariff exemptions aren’t the only area where the Trump administration may be abusing its discretionary power. Earlier this month, Inside US Trade reported that the administration was “pushing auto companies to commit that all of their output—even autos manufactured and sold within the United States—will meet US-Mexico-Canada Agreement (USMCA) regional value requirements, tying the demand to requests for longer transition periods for complying with USMCA auto rules of origin.”

Or, to list one more example, the Department of Defense recently awarded a $10 billion cloud-computing contract to Microsoft over Amazon. Amazon is now taking the Trump administration to court, alleging that it showed “unmistakable bias” throughout the tendering process. At a minimum, the decision raises eyebrows, given that Trump has been openly antagonistic toward Amazon and its founder, Jeff Bezos, who also owns the Washington Post.

In all of these examples, the Trump administration has the discretion to grant favors and provide financial incentives for decisions that otherwise have little to do with economic policymaking. Some of the decisions are clearly motivated by electoral politics. Since the election, notes a May 2019 ProPublica investigation, Trump “has made 35 claims that companies would create 8.9 million jobs in the US thanks to his policies and actions.” In fact, out of just 154,000 jobs created, a mere 797 are “attributable to Trump, according to the companies that did the hiring.”

Discretionary decisions that influence firms’ behavior and affect their competitive positions tend to inflict damage well beyond any one targeted company. Under such conditions, corporate executives will inevitably feel pressure to alter their decision-making to please the authorities. The current economic-policy environment has not made America great again. And the longer the government’s interventions persist, the less great it will become.

TOKYO, June 19: Substantial discussions on trade, including reform of the World Trade Organization, will likely take place at a... Read More...

WASHINGTON DC, Oct 14: Wall Street and the US economy are on the verge of recession, according to the CEO... Read More...