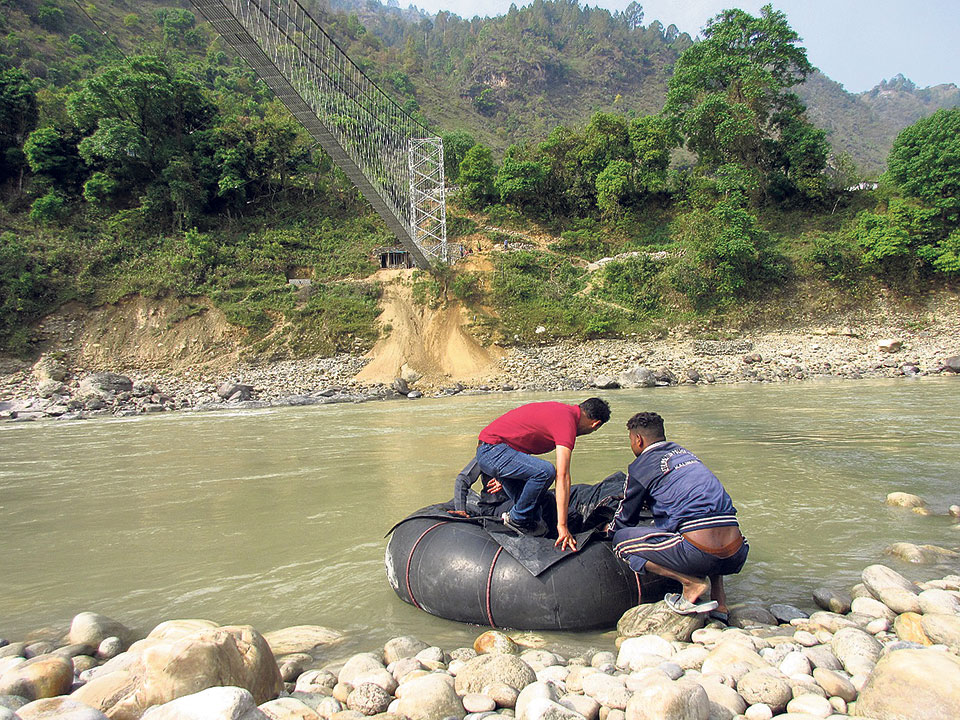 Locals board a tire tube to cross the Mahakali River in Lali of Lekam Rural Municipality – 3, Darchula in this recent picture. Photo: Prem Chunara/Republica

DARCHULA, May 22: Residents of Darchula villages bordering Mahakali River continue to use tyre tubes to cross the river even though a suspension bridge over the river was completed six months ago. The suspension bridge that connects Nepal and India and is situated in Lekam Rural Municipality – 3 of the district is yet to come into operation. Officials concerned said that the bridge has not been opened to the public because it is yet to be officially approved by the Indian side. This has dashed the hopes and excitement of the people who had waited for the facility for nearly three decades.

“Demand of having a bridge over the bridge is three-decade-old. Even though the bridge was constructed five months ago, we have not been able to use, we can just see it. Our dream of crossing the river without any fears, remains a dream,” said Rajendra Parajuli Joshi, chairperson of Lekam Rural Municipality – 3. “It is very unfortunate that despite having a bridge in place, it has not made a difference in people’s life.”

Locals continue to use tubes to cross the river. Elders, young people, even school children sail across the mighty river through tubes. Sick and injured people have no option than to do the same.

“There is no count of how many people, cattle died while crossing the river. Every time while crossing it, it is like you have challenged your life. During monsoon, the risk heightens. But there is no other alternative to using the tyre tubes,” Joshi elaborated.

The bridge is expected to serve basically to the locals of Lekam and Malikarjun Rural Municipality. Apart from them, residents of many other nearby rural municipalities also use the route  According to Joshi, there are still around half a dozen river crossing points where people use tubes to cross the Mahakali River. In some place, locals even use tuins (a makeshift cable crossing).

“Both tuins and tubes are an extremely inconvenient and risky channel to cross a river,” Joshi noted. “Constructing bridges has been a long-standing election agenda for political parties. People have been putting it as their top demand to political party leaders. Even though the bridge is ready, the government has not shown seriousness to open it for the public.”

Locals from Durchula and other villages cross the border and go to India on a regular basis to buy essential commodities, medicines, kitchen appliances so and so forth. Some also cross the border for work.

“We cross the river with the help of tube as there is a lack of safer means to do so,” said Karan Bhandari, a local of Lekam Rural Municipality – 2. “I have to go almost every day to purchase things.”

At a time, two to three people can get on a tube to cross the river. The riders have to balance themselves pretty well so that it sails properly. When kids are onboard these tubes, the journey becomes riskier.

Manomalika Construction had received the contract of Rs 3.2 billion to build the bridge on 20 September, 2016. After it crossed the first deadline, the deadline was expanded. At the end of December last year, it gave finishing touch to the bridge joining Dauda of India and Lali of Nepal. Commonly, it is also called Lali bridge.

On 10 January, Suspension Bridge Division of Lalitpur gave written notice about the completion of the bridge to the District Administration Office of Darchula. Subsequently, the administration on 14 January notified about it to the Indian administration and sought permission to operate the bridge. However, since India has not issued permission, the bridge has not come in operation till now.

Earlier it was agreed that the officials of the two countries would inspect the bridge as soon as it is completed and bring it in operation right away.

“We had sent them a letter regarding the completion of the bridge. Because it connects Nepal with India, it was requisite,” said Shankar Bahadur Bista, CDO of Darchula. He added that it was decided in a meeting held at Pithoragarh earlier that the bridge would be brought in operation after joint inspection by officials of both the countries and installation of security posts.

Citing the lack of security post, the Indian counterpart did not issue permission at the beginning. Later, Lekam Rural Municipality built security post at the Indian side of the bridge and even opened necessary track. However, this time Indian officials have stated that the delay in granting permission is due to the Lok Sabha Elections.

“As the elections started in India, it affected the inauguration of the bridge. There are certain process and code of conduct that they must follow and this seems to have affected opening of the bridge to the public,” said Bista.

There are no roads in Darchula on the side of Nepal. This forces locals in the Nepali villages to cross the border frequently.

According to Bhandari (local of Lekam Rural Municipality – 2), the delay is not just because of the election or anything else, but due to the lack of attention towards poor people. “We have to cross the river risking our lives every day while the bridge stays there above us. How sorry we feel about ourselves!”

DHARCHULA, April 1: A Nepali migrant worker died after falling from a suspension bridge along the Nepal-India border in Darchula as... Read More...

Bordering bridge to be closed for four days

DARCHULA, June 16: The suspension bridge that links Nepal to India in Darchula is to be closed for four days... Read More...