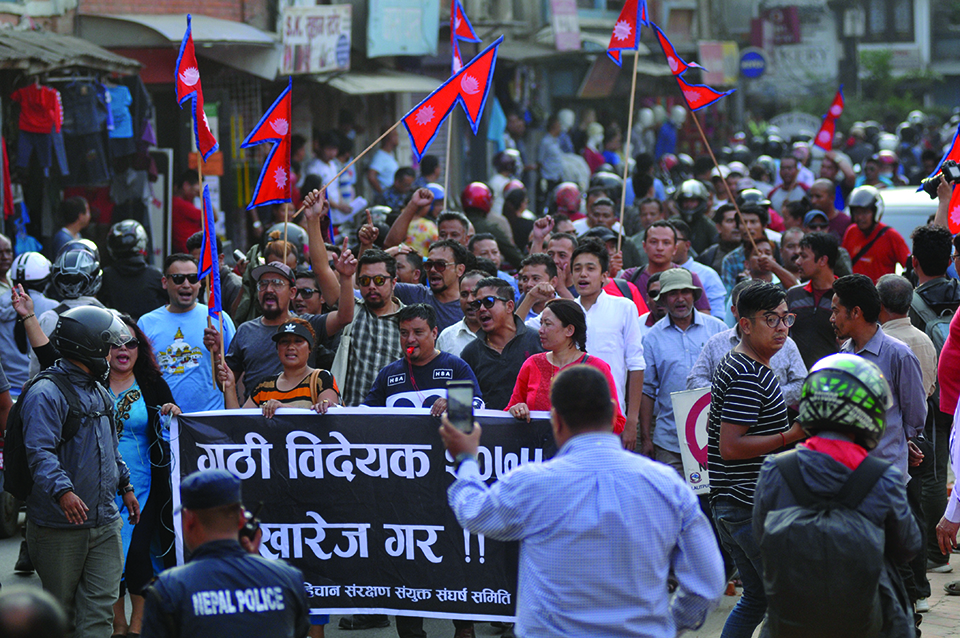 Opposition to the Guthi Bill challenged the legitimacy of the government but could it be a watershed moment that breaks Kathmandu’s domination over Nepal?

Opposition to the government’s proposed Guthi Bill exhibits how civil society engagement is undermining the consolidation of democracy in Nepal.

The Guthi Bill, tabled by the government in Parliament, intended to amend the Guthi Act and nationalize all public and private Guthis (or trusts) under a new authority. It granted the new authority wide jurisdiction over long-held traditional social, cultural and religious structures.

Public opposition to the Guthi Bill was fierce and quick. Kathmandu residents spilled on to the streets, stood down water cannons and threatened to shut the city. The agitation rapidly gathered momentum, drawing support from opposition parties and ordinary citizens. Kathmandu’s elites weighed in—oh, by then it would have been unfashionable not to join.

The government initially remained defiant, pushing ahead toward a vote in the parliament. But as the protests gathered support and appeared to be getting out of control, it reversed the course and withdrew the Bill from the parliament.

Kathmandu residents and civil society leaders may applaud themselves for having forced the government to stand down on Guthi issue. But they must recognize the implications of their actions.

If the Bill is in violation of the constitution, it could have been legally challenged (once enacted into law) and the courts would have struck it down.

If the Bill is not in violation of the constitution, why should an elected government with a clear mandate not have the right to bring a Bill to parliament where debate, discourse and protests would no doubt follow? Where was the need to protest on the streets?

Many institutions that are important to democracy are still taking shape. At this early stage of our democratic evolution, the legitimacy to govern comes not from the power provided by the constitution but entirely from ordinary citizens—or civil society—acknowledging and respecting the authority of government to govern.

Opposition to the Guthi Bill was an illustration of how Kathmandu’s civil society undermines the legitimacy of the government to govern. Such protests make it harder to establish democratic institutions and consolidate democracy because they create parallel power structures outside of the parliament.

If one group can threaten and block a government from legitimately bringing laws, why shouldn’t others? Why then the need for government at all?

For democracy to mature in Nepal, our civil society, particularly Kathmandu’s organized elites, must first be willing to live in a democracy.

First, protest rallies against Guthi Bill were more a show of force. It was intended to threaten (“take it back or else”) rather than advocate and appeal. Instead of the threat of terror, civil disobedience must be based on “disobedience” where civilians refuse to do what is expected of them.

If opposition to the Guthi Bill was around the fact that state control would undermine tradition and culture, a better form of civil disobedience would have been to shut down all such religious cultural events for a year. Imagine if for a year Pashupati temple remained closed on Shivaratri or Rato Machindranath was not held, that too on Visit Nepal 2020. What would Nepal be without its culture? Something like this would have been far more constructive civil disobedience without water cannons or the threat of violence.

Second, on many issues, Nepali civil society merely reacts. Rather than organize, educate, advocate and build support, we respond only when the government attempts to regulate. Advocacy for us are slogans on placards, a rally or an infinite hunger strike. Advocacy also requires mass public education to generate support and keep the issues relevant.

In both Guthi Bill and Media Council Bill, key criticism was that government did not adequately consult with the stakeholders. One lesson from this should be that civil society must pressure political leadership to legislate a rule making process, an act which would specify minimum standards of consultations necessary before legislation can be introduced.

Government may not have consulted stakeholders but that shouldn’t have stopped stakeholders from engaging before the bills came to the parliament. As civil society we must do better to organize, communicate and advocate than simply spilling out on the streets and holding placards that say “take it back, or else.”

The protests against Guthi Bill also highlighted Kathmandu’s dominance over the country. Although there were a few protests outside Kathmandu—in Dang and Janakpur for instance—it was primarily a Kathmandu-centric affair.

Nepalis watching the proceedings in Kathmandu from outside the valley will contrast the protests of Guthi Bill against the movement in Madhes. For months, Madheshs took to the streets, faced bullets (not just water cannons) and even got a friendly neighbour to impose a blockade. What happened? Nothing, except some promises that no government seems intent on delivering.

Nepalis watching the proceedings in Kathmandu from outside the valley will also be reminded of recent land reform policies that have blocked agricultural land from being sold as smaller parcels. This measure has significantly reduced the wealth of many farmers and landholders, especially outside Kathmandu. Despite protests, government has remained unmoved.

Would the Madhes agitation and land reforms be different if Kathmandu was involved? Whether you are a communist marching toward a socialist state or simply wishing for a truly decentralized federal Nepal, Kathmandu clearly remains the final battle ground. Throughout history, since the unification of Nepal, Kathmandu has been the centrality of Nepal. Centuries of patronage, privilege and power are entangled within the culture and wealth of Kathmandu.

If you are honest enough to listen carefully, from within the battle on Guthi Bill, you will hear the first whisper of a new rhetoric taking shape: Kathmandu must fall. The naked and overwhelming dominance with which Kathmandu’s civil society humiliated and tore apart the legitimacy of an elected government will be the single largest factor that will sweep the Nepal Communist Party back to power in the next general election.

Kathmandu may have saved their Guthi, but it has lost the country.