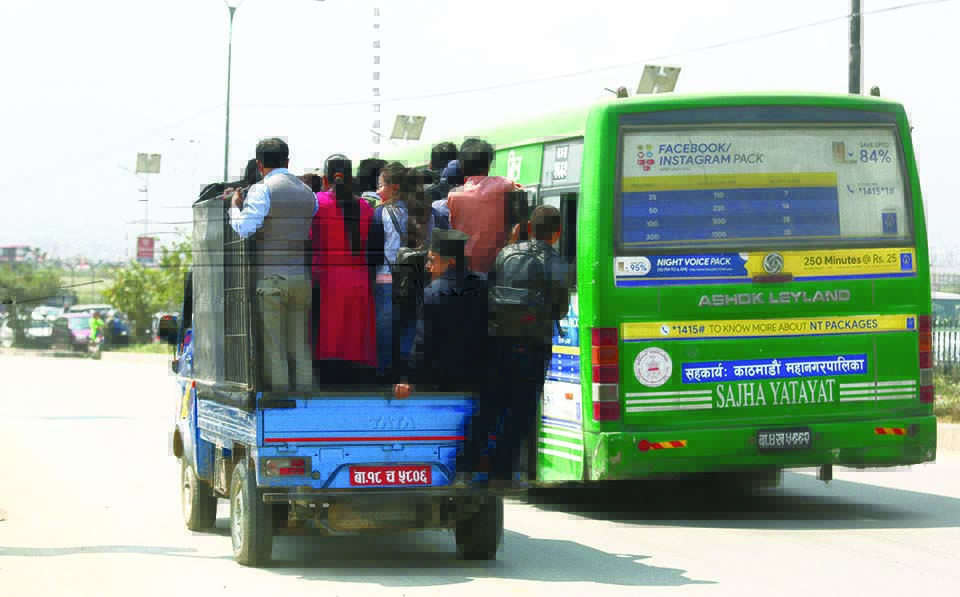 Government needs to implement 24-hours bus service program immediately in Kathmandu. Later this service can be expanded to other urban cities like Pokhara and Biratnagar

Mobility is a basic need of people to enhance social as well as economic wellbeing. In today’s context, mobility is either supported by private vehicles or public transportation systems. Although public transportation is better in terms of sustainability, it is less convenient than the private mode of transport. The growth in per-capita income level around the world has led to the increase in ownership and subsequent use of private vehicles around the globe. Public transport has been struggling to compete with private vehicles in recent years. The problem is apparent in developing countries like Nepal where owning a private vehicle is associated with one’s social status. While the number of registered private vehicle has grown, there has been limited investment in infrastructure to accommodate the surge in vehicle ownership. This has led developing countries to follow the footsteps of their developed counterparts to invest in a world-class public transport network to support mobility.

Transport Review (Vol 32), suggests that the success of public transport is due to a coordinated package of mutually supportive policies that include (1) more and better service, (2) attractive fares and convenient ticketing, (3) full multimodal and regional integration, (4) high taxes and restrictions on car use, and (5) land-use policies that promote compact, mixed-use developments and densities high enough to support public transport. The absence of transport services during night times seriously impacts mobility and reduces the reliability of public transport. Users are compelled to shift to private modes of transport.

In Nepal, the only mode of public transport is road transport and is basically supported by public buses. While public buses are available in urban areas during the day, the service stops during the night. Night bus service is an essential element of an urban city as it increases business activities, generates additional employment and provides a positive boost to the economy. Furthermore, it also improves road and pedestrian safety by reducing or eliminating use of private vehicles and time spent walking alone late at night. Night buses are affordable alternative to people who are too tired to drive or to those who have purchased private vehicles to enable them to travel during the night. Such services improve late-night access to restaurants, boost recreational activities, benefit the environment and contribute to traffic management during the day by reducing the number of vehicles on the road.

Night bus service was once implemented on August 17, 2012 in Kathmandu Valley. A trial service was operated from eight to 11 pm for six months under the subsidy of the Kathmandu Metropolitan City and the Ministry of Finance (MoF). Fourteen buses were operated in five different routes in the inner city and one more route in ring road. The 26-seater capacity buses equipped with CCTV and two-armed security personnel were operated. Each bus was assigned to do four to six trips on their respective routes per day. The fare was the same as day time services.

KMC provided Rs 2.5 million and MoF provided Rs two million for the operation of the night bus service for the first six months as fuel cost and wages subsidy to the private operators. It was agreed that the private operators after six months would operate without subsidy but the agreement was not met. Each bus collected, on an average, Rs 500 to Rs 700 in the first trip, but passenger number dropped after the first trip during the night. With low passenger flow, operating the service was not economically sustainable. When the KMC and MoF stopped subsidizing the service providers, the nigh-bus service came to a complete halt.

Public transport reduces the cost for the community, improves land use, decreases energy and fuel consumption, cuts emissions and improves accessibility. In practice public transportation is service oriented and mostly operated through subsidy. Once the service of public transport approximately equals the use of private vehicles, people will start shifting to public transport.

Nepal’s total urban population accounts for around 20 percent with the annual growth rate of five percent. With the growth in population and economic prosperity, urban planners are facing problems to address urban mobility. Population and economic growth are the major causes for the growth in the number of the vehicles. Annual growth of motorized vehicles in Nepal is around 20 percent. An urban area with a well-developed public transport tends to have relatively fewer private vehicles, making traffic management easier.  In managing population growth and providing services, planners are looking to balance economic priorities with sustainable development that meets mobility needs. Urban planners regard the development of public transportation to address city’s mobility needs. Without night public transport service, a city’s mobility cannot be substantially relied on public transport.

On July 01, 2019 Province 3 government, Kathmandu Metropolitan City, Lalitpur Metropolitan City and Sajha Yatayat signed a contract to jointly invest and operate public buses in Province 3.  Although, this approach alone is not sufficient to solve mobility challenges of the country this is certainly the positive indication that government of Nepal is serious regarding development of systematic public transportation.  Riding public busses must be the way of life of the city and a well-planned city is one where people can travel day and night using public transport. To make public transport reliable, night transport is one of the most essential factors.

Thus the government needs to implement 24-hours bus service programs immediately in Kathmandu at least. The service then should be extended in urban cities like Pokhara and Biratnagar and then to other cities.

Government must understand that implementation of proper public transportation system requires financial subsidy. The proposed transport authority should have a wing that should bring all the current bus operators including government as a shareholder of this wing and operate public buses in systematic and scientific way by developing integrated routes, ticketing systems and timetable.

The author is a transport expert

Mayor Shah’s clarification to Bhim Rawal: I held meeting with US envoy after permission from foreign ministry
20 hours ago

20 ‘unlucky’ candidates who lost HoR election even after securing 30,000 plus votes
11 hours ago
Import of EVs crosses 1,000 units during mid-July to mid-November
12 hours ago

20 ‘unlucky’ candidates who lost HoR election even after securing 30,000 plus votes
11 hours ago
Import of EVs crosses 1,000 units during mid-July to mid-November
12 hours ago