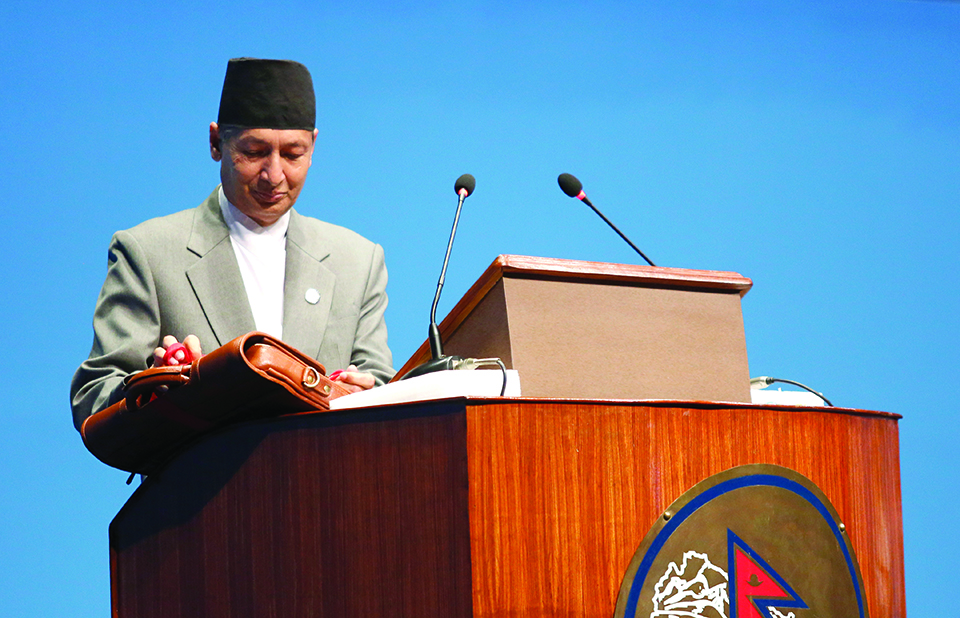 For government to promote private sector, it must learn to play like God, which provides destinies and allows humans to fulfill them while remaining invisible

What a strange world it would be if every time a human succeeded, the Gods thundered from the heavens above saying, “that person succeeded only because we gave them the destiny to succeed.”  As creator, God provides us our destinies. But every time a person succeeds, God doesn’t interrupt to lay claim to that success. God remains invisible.

This analogy about destiny and the invisibility of God could help inform how the government should manage the private sector in Nepal. In this budget speech, the word “private sector” appeared 12 times. In a speech of 12,217 words, that might not seem like much. But if you consider that the two favorite words of this government, “prosperity” and “prosperous,” appeared only seven times (“socialism” appeared only twice), 12 mentions of private sector should be taken as a ringing endorsement of that idea.

Last June I presented a paper titled “Scaling up Distributed Utilities” at the Asian Clean Energy Forum (ACEF) in Manila, an annual event hosted by the Asian Development Bank (ADB). I discussed how we as a private company, and other private enterprises, must lead in the development of distributed renewable energy systems in rural Nepal. Government has outlined a vision of distributed renewable energy system in all 753 rural municipalities across Nepal. Now, I argued, it was the private sector’s turn to recognize the business opportunities from rural energy services and deliver on that vision.

As proof of our capabilities and confidence, I described the work we were already doing in building, investing in and managing distributed renewable energy systems across rural Nepal. I blew our own trumpet (which is what humans always do, which explains why we are not God and why God is God).

I did not acknowledge (somewhat intentionally) the tremendous support that the government, the Alternative Energy Promotion Centre (AEPC) in this case, had provided on these projects.

Gods may forgive our failure to acknowledge the destiny they provide, governments do not.

Shortly after my presentation, the former executive director of AEPC, who was also in the session, offered a stinging critique. The private sector’s success, he pointed out, was entirely because of the support AEPC had provided. The government, he said, must continue to lead, partnering with the private sector and other entities as required.

When I returned to Kathmandu, I received similar feedback from others at AEPC. I was constantly failing to acknowledge the support that AEPC had provided toward our projects.

Their critique and feedback were, of course, entirely correct. Our investments in rural distributed energy projects—and of other private companies as well—would simply not have been possible without the support from AEPC. And there I was, on an international stage, not even carrying a simple thank you note for AEPC.

Between the UK Department for International Development, World Bank and ADB, AEPC expects to receive approximately $50 million in financial support toward expanding rural energy access. This is in addition to the several millions that the government has made available to AEPC.

One easy, perhaps convenient, source of confusion is the distinction between “contracting or public procurement” and “private sector-based markets”. AEPC and its development partners have described the construction contracts it provides to rural energy projects through public procurement as private sector market engagement. They are not. Public contracts create worshippers who flock to temples to pray. Market opportunities create believers who follow their karma.

While AEPC and its partners have successfully created a large network of contractors, they have failed to create an ecosystem of private enterprises for rural energy services. Like mushrooms that spring up after a rainy day when it is moist and wither away when it is sunny and dry for a few days, this network of contractors springs up when there is contracting budget and withers away when that runs out.

The problem of poor energy access in Nepal cannot be solved by AEPC, or the government, simply demonstrating commitment to providing reliable energy for all. It can be solved only when the people of Nepal first demonstrate confidence in rural areas, and then unfold the destinies granted by government to transform rural areas.

This is where AEPC must learn to play like God: Create destinies and become invisible as the destinies they created take their course.

In their personal private moments, even the most successful people pause to thank God for their destinies. Mahatma Gandhi, Martin Luther King and Nelson Mandela inspire us because we attribute their achievements to their struggles. They wouldn’t be as inspirational, as important to history, if we attributed their success entirely to the hand of God.

In much the same way, every private enterprise working on rural energy in Nepal, us included, has a destiny that has been shaped by AEPC. In our personal private moments, we all recognize and thank AEPC for providing us those destinies. But in public, private enterprises must be encouraged to recognize and speak about the opportunity for energy services in rural areas.

Much like God creates destinies and believers, AEPC must realign how they engage with the private sector.

To build a robust private sector-led market for expanding rural energy access, AEPC and its partners must support enterprises, recognize and develop and tap the strong business opportunities in rural energy services, instead of relying on government contracting alone.

A view of what happens when the government chooses not to remain invisible was on display at this year’s Nepal Investment Summit 2019. Organized by the Investment Board of Nepal (IBN), the event showcased 77 projects with investment requirements totaling $31 billion.

Although several Nepali private sector enterprises were on display, the investment summit was largely about the government—its schemes, its projects and a few hand-picked private sector projects.

Many international investors reportedly committed to investing. They were expressing confidence in the government of Nepal, not in the destinies of Nepalis. Without believers, investors should be advised: “God giveth and God taketh away.” It is only the destiny of men and women on earth that endures. No one can take that away.

Code will be the government

There is a need for one monopolistic fast-learning artificial intelligence holistically ruling the planet. With AI, it will be possible... Read More...

How an AI utopia would work

In an AI utopia, government intervention would be the norm, and private production the exception ... Read More...