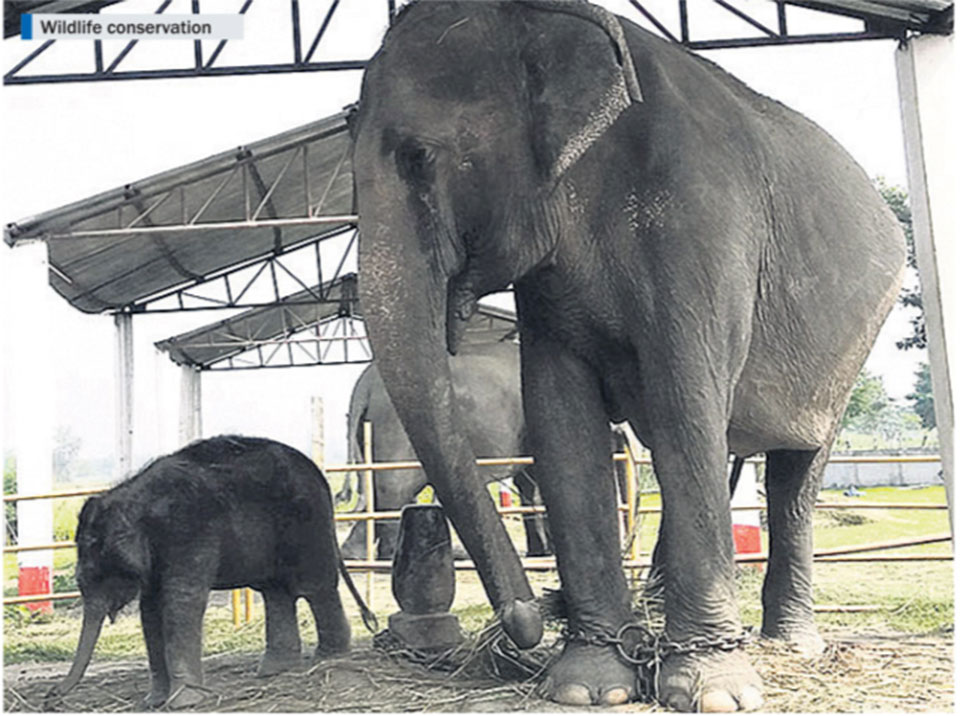 An elephant is seen with her calf at the Koshi Tappu Wildlife Reserve in this file photo.Photo: Republica

ITAHARI, Nov 13: Koshi Tappu Wildlife Reserve has received a new member on Tuesday after a 16-year-old elephant Saraswatikali gave birth to a male calf at 2.10 in the noon. Every time an elephant gets pregnant and gives birth to calves, a sense of joy spreads in the reserve. Staffs and officials celebrate the arrival of a new life.

However, it has never been easy for the authority to save young elephants. The survival rate of elephant calves is low, according to the officials. And it becomes even harder if if the elephant's habitat is changed.

Following growing number of cases of human-wildlife conflict in the buffer zone, elephants from the reserve were recently shifted temporarily to the northern zone of the reserve.

According to wildlife conservation officer at the reserve, Ram Dev Chaudhari, it would be very hard to save the new calf as the elephants were recently relocated to a new habitat.

"When elephants are relocated to a new habitat, they struggle to adjust to their new surroundings. They face several challenges, and reserve officials also face many problems in helping them adjust to their new surroundings," Chaudhari stated. "Reserve officials are giving their hundred percent to take care of the calf, still we are a bit nervous," he added.

There are five adult elephants in the reserve. Staffs and the officials have centered their focus on the new mom and the calf than others. 'And that is necessary.'

"We take special care of elephants when during their pre and post pregnancy period. New mom and the calf indeed need extra care, so right now, that's our focus, though others are also getting good care as well," said Ram Gulam Chaudhari, chief of the elephant department at the reserve.

"We have deployed officials for taking care of the mom and calf," he added. According to officer Ram Gulam, as many as 16 staffs are presently tending to their needs. Since it is very crucial to provide every facility possible to a nursing elephant and its calf, the reserve had been preparing necessary resources for a long time now, he said.

"If adequate care is not provided to the calf and mother right from the beginning, their lives could be at risk. So we have been taken extra precautions," Gulam added.

He further stated that elephants feel uncomfortable if their habitats are changed. And added the nursing mother has been showing signs of dissatisfaction.

"We are worried that Saraswatikali does not look much comfortable in her new habitat. She was a calm elephant earlier," he said. "Although staffs have been working hard to make her feel good and she is being fed the best food, things are not yet that satisfactory," he added.

Saraswatikali is being fed sweet porridge these days. Along with that she is also being provided with supplementary diet. And the calf is dependent on mother's milk alone.

If the mother continues to feel uncomfortable with her new habitat, reserve officials say that they might return her back to old habitat. "They are given proper diet and care, and yet it seems they are not feeling comfortable. If things don't improve in a day or two, we may take decision," said Gulam.

He further stated that male elephants are biggest threat to the calf and the mother. And finding a place free of male elephants is challenging, he said. "We have a very low survival rate of new born elephants. They die due to several reasons including attack by other elephants. So, we are in a dilemma whether we should move them back to the same place or continue to rear them here," he said.

A year ago, Shovakali, another elephant had given birth to a female calf. The young elephant has been named Koshikali. Similarly, just six months ago, Damak Kali had delivered a female calf, tool. She got her name 'Kusahakali'.

Elephants are pregnant for almost 22 months. And in a lifetime an elephant generally give birth eight times. "And the survival rate of calves is negligent," said Gulam said.

Along with human casualties, elephant deaths are also on the rise

SUNSARI, Dec 14: A man was killed in an elephant attack in Sunsari on Monday morning. The deceased has been... Read More...