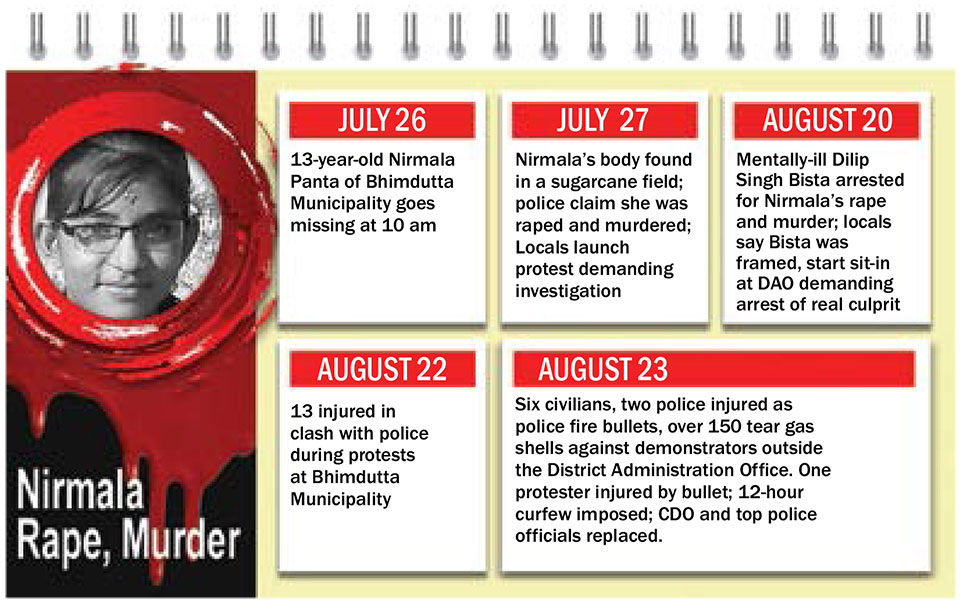 KANCHANPUR, Aug 24: Durga Devi Pant of Bhimdutta Municipality-18 became anxious after her 13- year-old daughter Nirmala, who had gone to her friend Roshani Bam's house in the morning of July 26, hadn't returned by evening . She, along with the villagers, requested the police to look into the matter. She remained at the police station till 2 AM to get them to do something. But the police dismissed her requests.

“If the police had started a search that very day, maybe we could have traced the culprits,” she said, adding that she had even requested them to search Roshani's house.

The locals, who were already agitated over the lack of police response on the first day, started staging protests from July 27, demanding an investigation. Nirmala's family agreed to take her body for last rites only on July 30 after the police, under growing political pressure, gave a written undertaking to conduct an investigation.

Nirmala's father Yagya Raj Pant claimed that even though he and his relatives urged the police to conduct an investigation at Roshani's house, they turned a deaf ear. “They didn't even carry out a simple interrogation with Roshani and Babita,” he said, referring to Roshani's elder sister. Roshani had come to Nirmala's house a day before her disappearance, asking her to come to her house the next day to take her science notebook.

Yagya Raj claimed that Rupa Karki, a local, had given a statement to the Central Bureau of Investigation (CIB) that Babita was the one who said Nirmala's body could be near the site where her cycle was found. He added that his wife was denied entry into Roshani's house on the day of Nirmala's disappearance. She had wanted to search if her daughter was inside. Yagya Raj said, “We are not claiming that the sisters murdered our daughter, but they might know something about the incident.”

Protests by locals demanding a thorough investigation turned violent after the police informed them on August 19 that Dilip Singh Bista of Bhimdutta-19, a mentally challenged individual, was the perpetrator of the rape and murder. They reacted with skepticism. Bista used to beg for his food and was shy of women.

Police had asked Yagya Bahadur to file a First Information Report (FIR) against Bista, but he didn't do so after they denied him a meeting with Bista. He said, “They said they had a video of Dilip confessing to the crime, but they didn't show it to me.”

The police had taken him to the sugarcane field where Nirmala's body was found and claimed that a piece of cloth was missing from Bista's shirt. The police picked up a cloth from the ground claiming that it was from Bista's shirt. “The piece of cloth neither had any traces of mud nor was it wet, and there was no mark at the spot from where the cloth was picked up,” Yagya Raj said, “There would be some mark on the ground if something was picked up from it.” He also said it was suspicious that there was no piece of cloth during the 25 days since the investigations started and it was only found on the day the police asked him to come along for a search.

Meanwhile, the locals of Bhimdutta-19 share the belief that the police have not just been able to find the culprits but are trying a cover-up. They announced indefinite protests on Tuesday, claiming there was a cover-up. Mahendranagar bazaar has been disrupted by violent clashes between protesters and police.

KATHMANDU, Aug 24: The District Administration Office has enforced an indefinite curfew at Mahendranagar once again from 8 PM today.... Read More...

Mahendranagar tense after mentally-ill man ‘framed’ over rape and murder

MAHENDRANAGAR, Aug 23: With the locals continuing protest against the police for ‘framing’ a mentally ill person in the rape and... Read More...