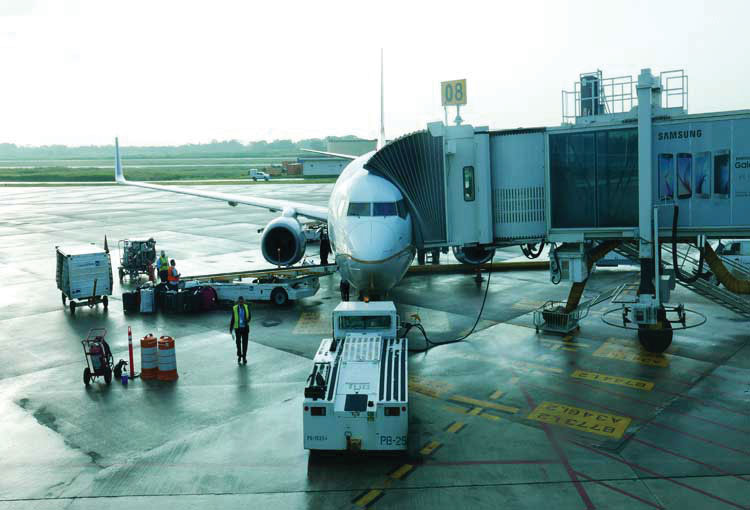 
Bill Clinton had used “It’s the economy, stupid” as a slogan that helped him win the 1992 US presidential election. The title here has been cloned to reflect the dismal reality of Nepal’s aviation sector. Nothing could have exposed it as succinctly as the recent Malindo debacle with lack of appropriate cable, of all the things, as the reason for TIA being un-functional for over twelve hours. It was not TIA’s fault that the aircraft had to abort take off and was unable to stop within the available length with nose wheel assembly sinking into the soft verge. Thankfully, it was not as bad as the heavier Turkish A330 runway excursion in 2015.

That said, such incidents are common all over. The grounding was not an issue. The inability to move the aircraft within a reasonable time frame was a blotch. We have come a long way since the days fire retarding foams were locked and not available beyond office hours as was discovered when in 1978 RA’s B727 had to belly land during wee hours. The question is to what extent airports have to be prepared to face such happenings within the airport precinct? There must be some minimum list of equipments/items that a functioning airport needs to have in place at all time. Assuming that TIA is well stocked with higher order items like foam, non-critical item like cable was, perhaps, overlooked.

What ails our airport?
Another aspect that has bedeviled airport improvement project has been the row with construction firms entrusted to work. Why is that we have constant recurrence of such instances with all big projects—be it with Melamchi, Bhairahawa airport or even high voltage transmission lines? Something is inherently wrong with the modality of awarding contract or is it our incompetence in scrutinizing documents and all wordings including “small” prints? It is all the more surprising as most of such projects have the backing of reputed institution like Asian Development Bank (ADB). Or it is none of the above but the local environment and “bureaucratic culture” that compels construction firms to abandon projects. Why do they feel it wiser to leave than continue? No big infrastructure projects will ever get done here unless the government tackles this issue with utmost seriousness.

The much talked about fast-track will be the indispensable umbilical cord that will be critical for the running of the Nijgarh International Airport as it has been projected as the panacea to all aviation ills. It is most likely that Bhairahawa (BHW) airport will be ready first, but it will not be able to run effectively unless Indian side relents in granting primarily more aerial entry/exit points. Unfortunately, KP Oli’s much hyped visit to Delhi and all the sweet talks there have brought no progress in this regard.

What an irony! We have been led to believe in non-existing and apparently very expensive railway and waterways possibilities while BHW’s operation remains in deep uncertainty. The funny part is that it requires nothing more than a simple nod from the other side. Even international operation from Pokhara (PKH) will face similar hurdle if entry/exit point issue is not resolved.

TIA’s work list
As regards TIA, it will be prudent to push for construction of taxiway that links both runway ends along with creating more parking bays first. The runway extension can wait until these get done. The taxiways/parking issues have come to the fore because of the increased air activity. Ways to find interim solution, however distasteful it may end up being, has become really urgent now. Would it be too outrageous to make TIA unidirectional during peak hours? Take-offs from “02” (heading north), even if rare, is nothing new for departing jets. This will quicken the pace of arrival and departures lessening wastage of fuel/time spent for uncertain holding in the air.

Unable to make efficient use of TIA’s current operational hours it has now been decided to run it 21 hours for now. The night curfew at airports near cities is quite normal worldwide but we seem to heading the wrong way as TIA is literally an airport almost engulfed by the urban metropolis. Customarily airports that allow night operations have restrictions imposed under noise abetment procedures (NAP) like low power setting for take-offs and need to stick to designated flight path that avoid populated clusters.

First, TIA has not laid out NAP procedures and possibility of limiting aircraft to follow designated flight track is next to impossible in this constricted and heavily populated valley. It is sure to arouse public ire. Instead, it will be wiser to make efforts to spread the air traffic more evenly during normal flying hours. The policy of letting any airline come unrestricted with no thought about TIA’s capacity was of our own making. We should be dictating the term of use rather than airlines. If there is a lucrative market, airlines will find ways to cater.
But it was a different sort of logistics related experience on a recent return flight from India. First, as the flight was over two and half hours late, boarding had to be done under torchlight, there was no ground power.

Second, a parked A320 behind made it impossible for the ATR to make a safe turnabout after start up. Subsequently both engines that had been running full blast for about ten minutes were killed and crews deplaned apparently to get a pushback tug. We finally succeeded in getting airborne, leaving a very hot-n-dry Varanasi to cooler Kathmandu. Possible reason: as it was not a scheduled flight, the airline did the stupid thing by not arranging for ground support.

KATHMANDU, July 26: Nepal has made a significant improvement in the World Bank's 2018 Logistics Performance Index (LPI) compared to the... Read More...