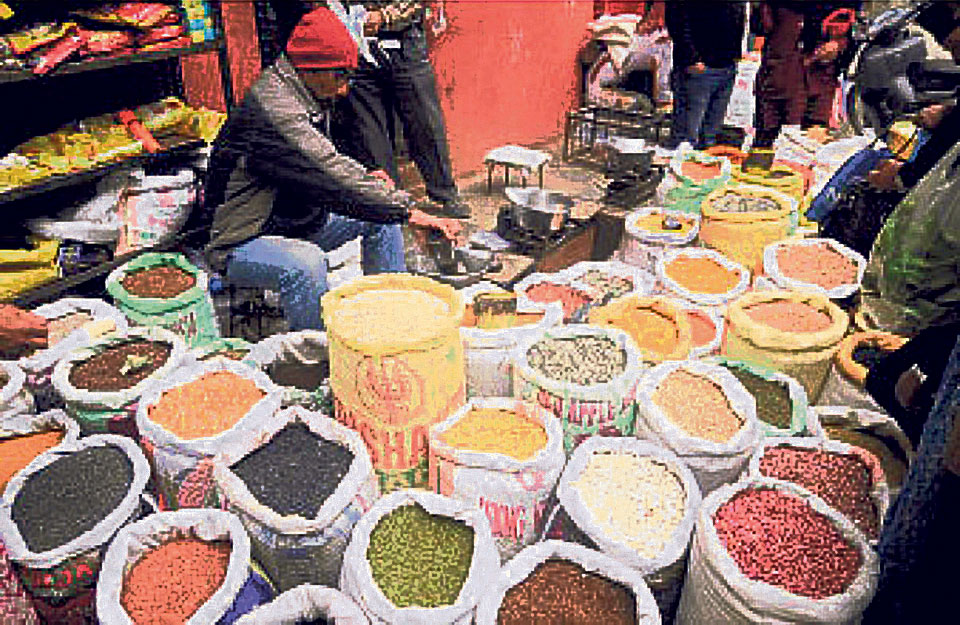 Vegetable, pulses and legumes, sugar prices fall to negative side

Inflation, as measured through the consumer price index (CPI), moderated in the review period amid a huge decline in inflation of food and beverage items.

Not only the food and beverage inflation dropped in the review period, price rise went into the negative side for some items. According to the data of the Nepal Rastra Bank released on Friday, the inflation of vegetable plunged to 11.7 percent in the negative side in mid-February from 4 percent a year ago. Similarly, prices of pulses and legumes also went down to negative 3.9 percent, while sugar and sugar products prices also fell to negative 2.7 percent in mid-February, according to the NRB.

Non-food and service inflation rate remained unchanged at 5.8 percent in the mid-February compared to a year ago.

While the prices of clothes and footwear rose to 7 percent from 6.2 percent, housing and utilities inflation dropped to 7.4 percent from 8.2 percent. Price of transportation sector rose to 6.7 percent from 1.5 percent, according to the NRB data.

Meanwhile, the year-on-year CPI in Nepal (mid-February 2019) and India (February 2019) stood at 4.4 percent and 2.6 percent, respectively. These rates were 5 percent in Nepal compared to 4.4 percent in India a year ago. The inflation wedge with the biggest trading partner of the country has widened in the review period as the inflation in India has been on a downward trend in recent months.

Inflation wedge refers to difference in rate of price rise of goods and services between two countries. Higher inflation wedge means price of the same good or product would be higher in Nepal than in India. Inflation rate in India is considered to be the primary determinant of inflation in Nepal.

The NRB wants to keep inflation close to the level of India so that Nepal's competitiveness is not lost due to gap of prices with the biggest trading partner. Economists say that there is a need to bring inflation at the level of India also to maintain the sustainability of currency peg with India.

Just opposite the gates of the UN Headquarters in Pulchowk, Lalitpur is a recently opened eatery by name of Sara’s... Read More...

Nepse inches up 4.97 points, while daily turnover amount dips to Rs 1.76 billion on Wednesday
59 minutes ago