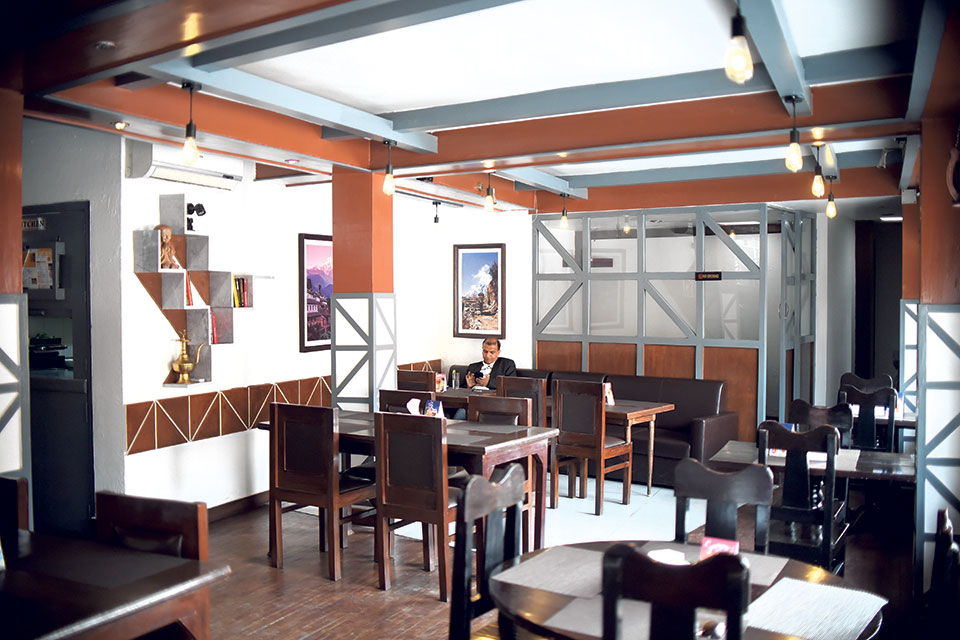 Just opposite the gates of the UN Headquarters in Pulchowk, Lalitpur is a recently opened eatery by name of Sara’s Bistro that is sparking quite an interest in the food loving community and on social media alike. And with good reason too. In pictures, their pan seared badel and mousseline cake look like real treats and their reviews so far have scored a solid five stars.

Run as a family restaurant, Sachin Sijapati, Pramila Bhandari Sijapati and Biplav Sijapati inaugurated the restaurant on the first day of 2019. They called it Sara’s Bistro after their mother Sara Sijapati so the entire feel of the restaurant is homely and comfortable, a total family pad.

Having worked in the restaurant circuit for quite some time, Biplav was familiar with the know-hows of running an eatery so he decided to give it a shot with his brother and sister in-law. So they promptly came up with a team for the kitchen and a team of servers and acquired the property that previously housed “Kancha ko Bhancha”. The decor was kept minimalistic but done in brighter shades. “We wanted to do less so that that it meant more. This is also why we decided to minimize our menu. We decided we would serve a limited variety but that we would do our best with it,” says Sachin.

He adds that they have devoted a significant amount of time in searching for the best available ingredients rather than compromising with easily available substitutes. “Each plate we put before you is really the best we could have possibly done,” he asserts. Although the menu at Sara’s Bistro leans heavily towards western food, there’s a good diversity as well. From Italian to Thai, there’s quite a variety to choose from. And they do well with their Nepali too – their Thali sets are among their best sellers and the feedback has always been positive.

The bistro is conveniently located among a throng of offices and corporate houses so there is usually a rush between the hours of 11am to 2pm. Identifying this, they have included an entire lunch menu for their customers. Although the founders are satisfied with their start and the response they have received, they confess that they have yet to carve a niche for themselves. “We’re still looking for something that we can take forward as our USP. We have done well with the quality of food we serve so far but we have yet to grow and develop,” concludes Sachin. 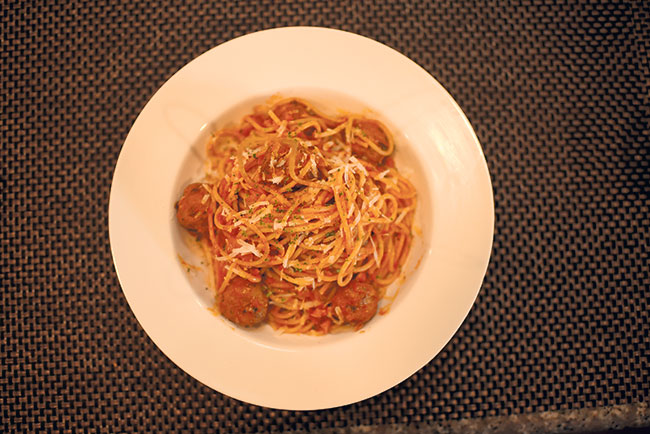 How often have you ordered spaghetti at a restaurant and been let down by what they have served you? Chances are, too often. At Sara’s Bistro, you can order spaghetti and be assured that you’re going to get a good bowl of it. The pasta itself is firm and the sauce isn’t very complex – it’s your typical home made tomato sauce. But it’s the meatballs you will remember for days to come. The meatballs are soft to chew and delightfully crumble when you bite into them. The attempt here isn’t to add a new flavor to this classic dish but rather it’s to honor the original taste. 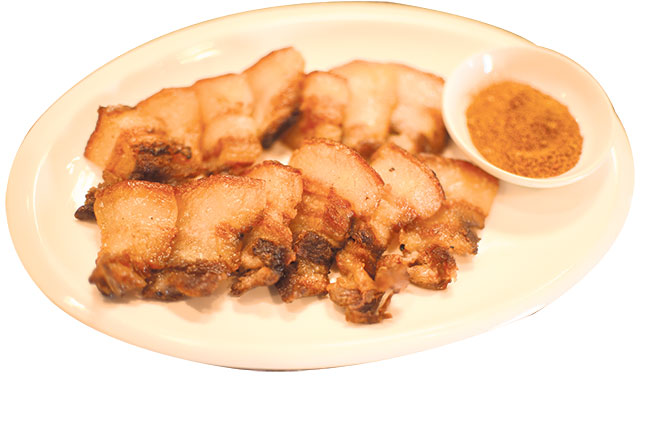 This badel (wild boar) is not for chewing, for it melts in your mouth like caramel. At Sara’s Bistro they serve you the fatty layer of the badel so it almost turns liquid in your mouth. The badel comes with a serving of timur so it gives the meat a much-needed dash of flavor. For this dish, add in all the extra seasoning that you might want, or opt out of it if pure fatty juice is what you’re looking for. You are in for a treat anyway. 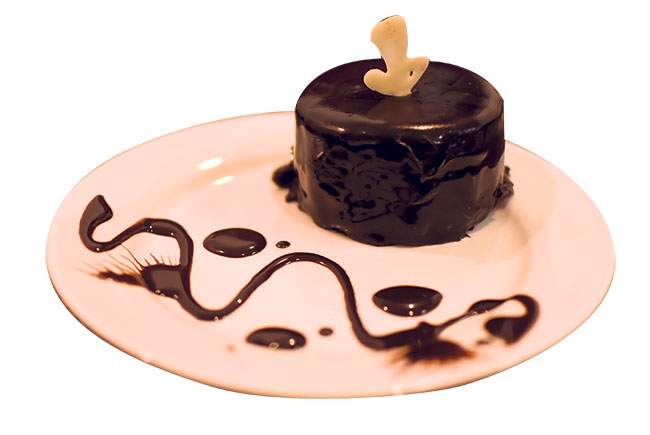 One could argue that this cake is a whole meal in itself and really we don’t have the heart to disagree. It’s quite sizeable so we recommend it only if you’re half full and still have appetite for more food. This cake is a puddle of never-ending sweetness. The whole mound of cake is gooey but not so much that it loses its form. The chocolate tastes dense and slightly bitter. There’s a light drizzle of chocolate sauce and chips to top it up. Yes it’s chocolate upon chocolate and it’s glorious. 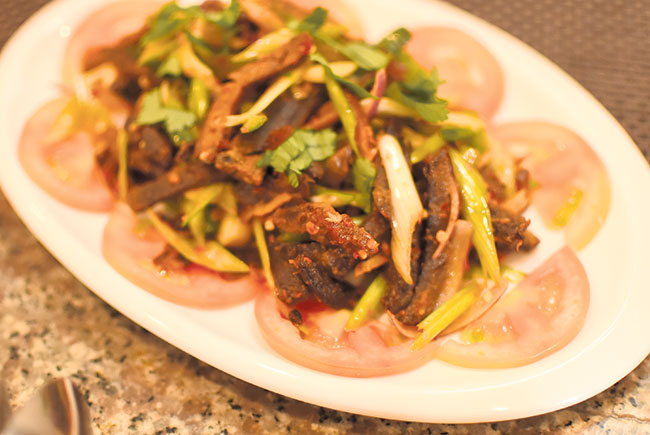 If you don’t do well with spices, we recommend that you get yourself a full bottle of chilled water before digging into this. It’s fire on the tongue. Don’t let the spice keep you from it though. The meat is chewy, thoroughly seasoned and has that punch you get when lemon works its magic on something that is heavy with flavor. To add to the glory is the fact that it’s a giant plate of meat. It will take you time and your jaw some significant exercise before you get to an empty plate. But we are not complaining. 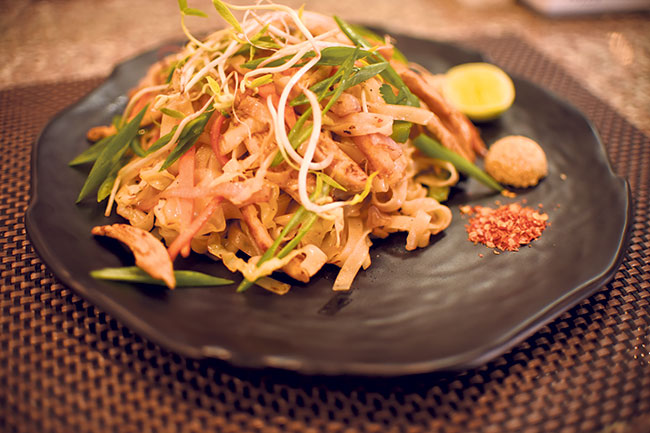 If you haven’t given this Thai delicacy a shot, Sara Bistro’s Pad Thai is a good first. A typical Pad Thai is rice noodles with an assortment of stir-fried vegetables, chunks of meat (chicken here) and is served with a sprinkle of chili flakes. This one in particular had an understated sweetness to it. The vegetables give it a nice crunch and the noodles were sticky (sticky is how you do the noodles in Pad Thai). Add in the lime, the crushed peanuts and the chili flakes and you’re all set. All in all this is a good plate of Pad Thai.