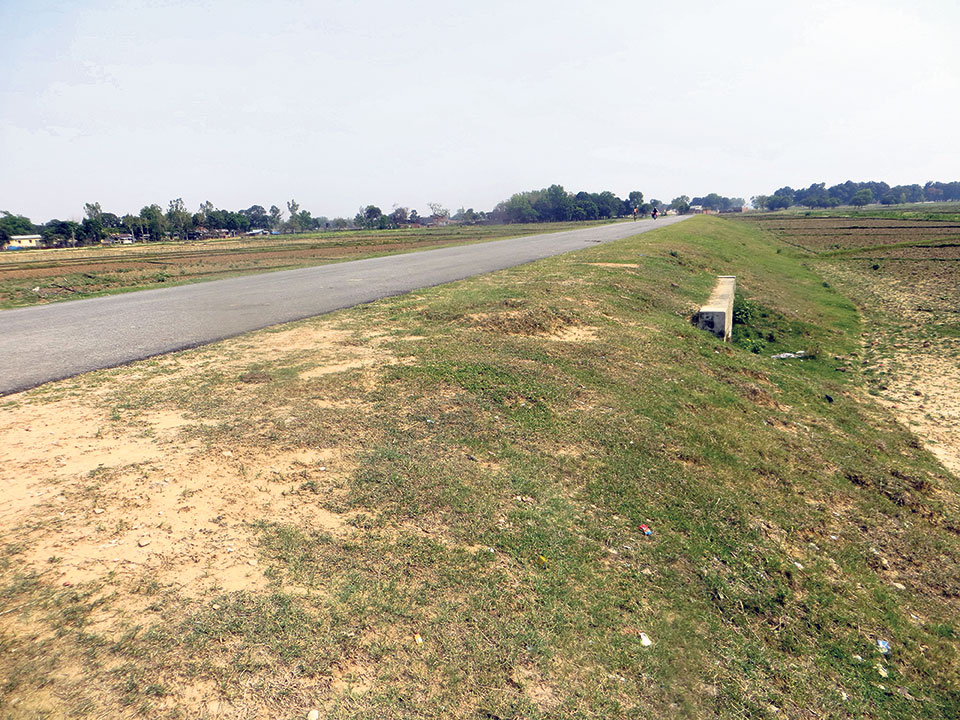 The embankment like road built by India along the no man's land.

BANKE, May 10:  As India is constructing an embankment like road next to the no man's land, locals living across the Rapti River in Narainapur are having sleepless nights. India has been constructing the road by blocking the natural flow of water the river in the process of extending the 'border road' which covers 1,752 km distance from east to west.

"The embankment made by the Indian government along the no man's land will cause complete inundation in Nepal's land," said Ram Chandra Maurya of Narainapur, adding, "First, India constructed a dam and then constructed a road on top of that." According to the locals, India has already completed constructing embankment like roads in Katkuiya and Laxmanpur of Narainapur, while the road is under construction in Kalaphanta, Matehiya and Gangapur.

As claimed by the locals, India sped up the construction of the dam by taking advantage of the local, parliamentary and provincial elections in Nepal. But the height of the road is uneven, ranging from 10 to 30 meters. Fearing that the Indian dam is a threat to their lives and property, the locals have stressed that the central government should do something to mitigate the risk before monsoon.

Istiyak Ahmad Sah, chairperson of Narainapur Rural Municipality, stated that the embankment has increased the risk of inundation in the border area. "The Laxmanpur dam was already a threat to the locals of Narainapur and now the new dam has added to the fear," said Chairperson Sah. According to him, it's almost sure that this dam will lead to inundation of various villages in the monsoon. Though the Indian government claims that the road is being constructed for patrolling the border area, for Nepal it is an embankment, says Chairperson Sah.

He further informed Republica that India has built small culverts only at two places in the eight kilometers long road. "If it was a road, India should have constructed enough culverts and bridges to let the flow of water," said Chairperson Sah, adding, "This is their plan to save their people and risk the lives of Nepali citizens." India was successful in constructing the road in nine months by taking the advantage of elections.

Narainapur Rural Municipality has informed the provincial as well as the central government about the embankment made by India in the no man's land by breaching the international law. Shankar Pokharel, chief minister of Province 5, recently visited Narainapur to take a stock of the situation there.

Every year, hundreds of people lose their lives and property due to floods. But still nothing has been done to solve this problem completely. The embankment like road being built by India has increased the risk of inundation in Hirminiya, Piprahawa, Saigaun, Radhapur, Katkuiya, Laxmanpur, Narainapur, Kalaphanta and several other villages near the border.

IPOs of 20 companies worth over Rs 5.90 billion on pipeline
18 hours ago

MCC compact agreement cannot be amended only for Nepal: FM Khadka
13 hours ago

Lending to wholesalers and retailers swells
10 hours ago

COVID-19 in Nepal: Delta variant detected in 41 out of 42 samples
7 hours ago

Enrollment begins for Sanofi and GSK Phase 3 efficacy trial of COVID-19 vaccine candidate in Nepal, led by IVI
8 hours ago

Lending to wholesalers and retailers swells
10 hours ago