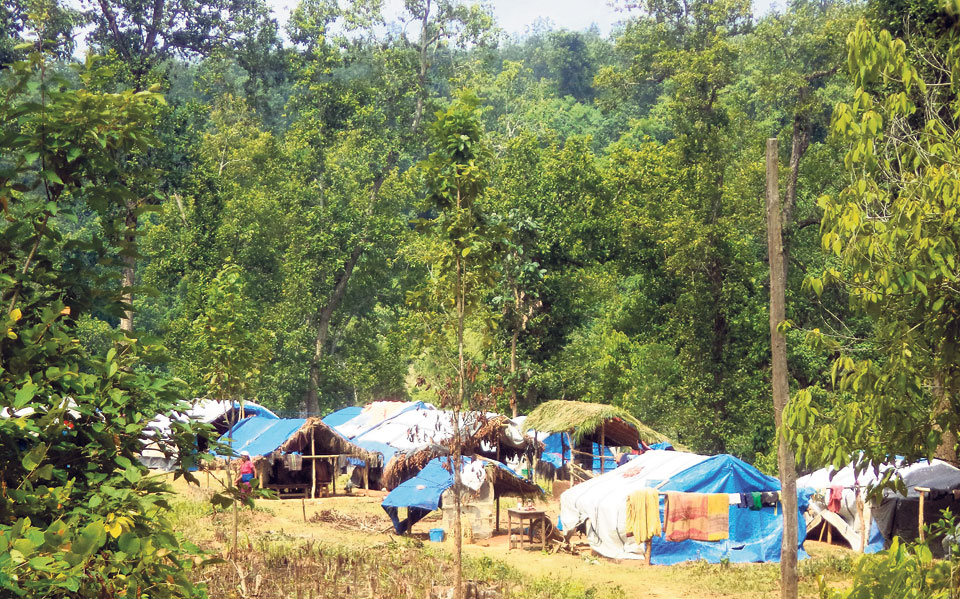 SURKHET, June 30: When dozens of families in Tikhakuna and Murmuri villages got displaced by floods in 2014, political parties availed them around 41 ropanis of land of a nearby community forest for their resettlement. The families started living in makeshift houses there. The forest department had shown concern but it could not make its voice heard. Altogether 41 ropanis of land had been provided for 93 families.

Four years down the line, the families are still living there. Moreover, many of them have already erected concrete houses in the jungle. Plotting of land has been done perfectly giving a sense that the displaced community is trying to make it their permanent address.

Earlier, during the time of conflict, huge portion of jungle land in several parts of the country were occupied in a similar manner. The then rebels took the matter in their own hand and gave verdict on several public matters, including granting public land to the locals.

Gutu jungle of the district is one of the forest lands that got miserably shrunk during the conflict period. The then Maoists massively fell trees and the land was sold off to people in throw-away prices. People could buy one ropani of land for just Rs 2,000. Maoists provided such land to 250 families .

Back in 2009, 140 families of Simali village lost their houses to landslides. The displaced were given jungle land for settlement.

When such lands are provided, there is always the nexus of political parties involved. And more often than not, their vested interest works. The displaced admit that land they are provided for resettlement is 'often in hold of politicians who help them get the land'. That is the reason why, it is found that the displaced are given adequate land.

"We are not given ownership certificate. But later, they occupy our land," said a displaced, requesting anonymity.

Flood and landslide victims who have been living in the land of community forests lament that the government does not think of permanent solution for them. On the other hand, politicians who seem to help them do not guarantee that the support is for long term.

The displaced people say that they never wanted to occupy the forest land but had no other option. There are a lot of unused government plots which could be provided to them. "However, they do not go for right solution," said a local, Kalu Giri.

Meanwhile, Hemraj Bista, an official at the District Forest Office, stated that forest land encroachment is not a new problem. No matter how much seriously the forest department takes this issue, it has been going on unabated with 'political support'.

"What can we do? We are constantly fighting against it. Forest areas cannot be used for personal use. We keep clearing the occupied land but they again come and fix their houses there," he said."It has become very challenging. More and more forest lands are being occupied despite our attempts to free the lands," he added.

He said that forest lands in Surkhet have gone in the hands of mafias. The land occupied a few years ago has now turned into dense settlements.

"In such a situation, the forest department alone cannot reclaim the lands. They have turned forests into huge residential areas having market," he noted.

Most of the forest lands in Surkhet were occupied after 1980. Earlier, people used to simply come and clear the forest land and occupy as much as they wanted. Later, after Land Reform Act was enforced, land mafias still continued the trend, Bista said.

"Then during the conflict period, things again went out of control. Jungle lands were massively destroyed for human settlement," he added.

Even after the rebels signed the peace accord and headed the government, the forest issues did not get any attention. The lands legally or illegally occupied were not given back to the forests, Bista added.

"Thus, greenery has largely been destroyed and it certainly affects the environment in too many ways," he added.

ITAHARI, Aug 1: Around a decade and half ago, Anu Shrestha's family in Bahuni village of Morang district moved into... Read More...

KANCHANPUR, Jan 4: People have encroached on community forest land at Krishnapur Municipality-1 in Kanchanpur in the name of landless... Read More...

Vaccination to businesspersons demanded
9 hours ago