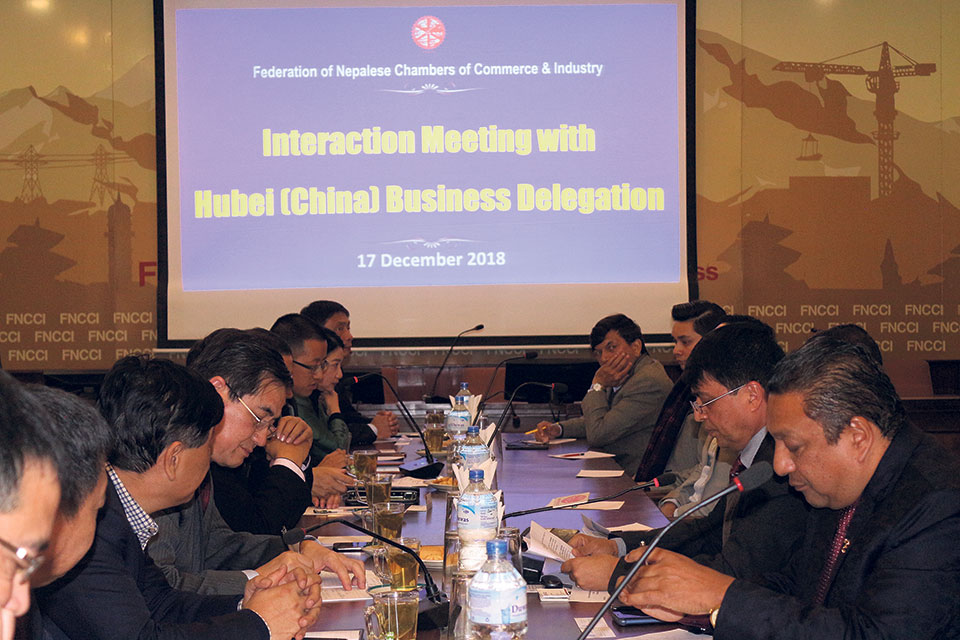 KATHMANDU, Dec 18: On behalf of the government of China's Hubei province, Chinese entrepreneurs have said that the provincial government was interested to invest in Nepal to contribute to the country's development.

The two sides discussed Nepal-China economic and commercial relations, investment environment in Nepal, and Foreign Direct Investment (FDI) and other investment-related policies of the country. The FNCCI team was led by vice president Chandra Prasad Dhakal.

Assuring Zhao about favorable investment environment in Nepal, Dhakal said that the present moment was the right opportunity to invest in Nepal.

"We have expected significant investments in Nepal from China," he said, adding, "The FNCCI is ready to bring in investment, capital and technology in the country's industrial sector."

He invited Zhao to attend Nepal's second investment summit that the government is hosting in March next year. "Before the summit, both the government and the private sector are working to revise Foreign Investment and Technology Handover Act, Industrial Enterprises Act and other required acts and regulations," he added.

Dhakal further requested Zhao to invest in productive sectors of Nepal, such as agriculture, infrastructure, tourism, energy, and information technology.

Responding to Dhakal's request, Zhao said that the Hubei provincial government was willing to contribute to Nepal's development through investments in technology and capital. Executive members of FNCCI and representatives from its member associations, Nepali entrepreneurs currently involved in trade with China, and other stakeholders were present in the meeting.

HoR meeting: Bill related to Oath to be passed
41 minutes ago