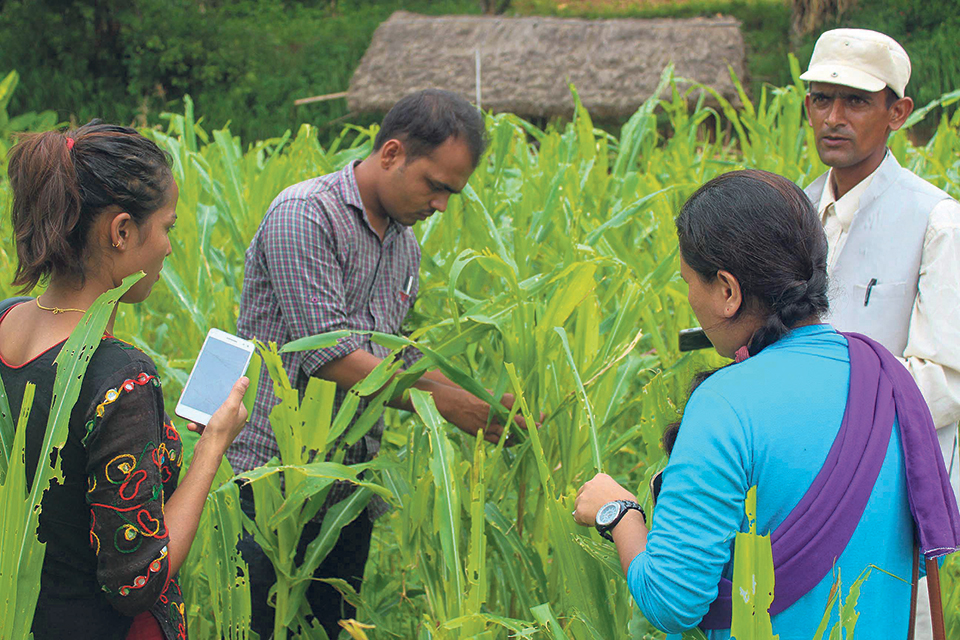 Promise of generating employment through agriculture revolution won’t be realized if we continue to ignore the factors that have been deterring people from taking up farming.

Amid deepening crisis of Covid-19, scores of opinions have been thrown by various scholars suggesting that the government should employ the overseas Nepali migrant returnees in farm production. Some experts further state that it is high time for Nepal to rope in youths to the farm sector which has long been neglected and can generate ample employment opportunities. Very true.

Opinion makers, economists and policy makers have suggested that government unleash the campaign of commercializing the agriculture in the way that can retain the youths within the country and build a platform for returnees for farm-based entrepreneurship.

The significance of the agriculture as highly potential sector for employment has further increased at a time when Nepal is expecting influx of youths from overseas destinations and sharp drop in employment in other sectors due to deepening crisis of Covid-19.

Policies and programs on agriculture development seem similar every passing year, with full of commitments and targets which are never materialized. We have never cared to find why such targets are not met and why the government has failed to make farming more attractive to Nepali youths than overseas job? We have seen exodus of youths to foreign labor market leaving our fertile land unattended and making our country more reliant on imports.  For years, the government has been announcing different incentives including concessional loan, subsidy in fertilizer and other inputs, subsidy in farm insurance, among others targeting existing and potential farmers. However, youths are not attracted into the farm sector, which has not only been contributing more than 27 percent to Gross Domestic Product (GDP) but also holds tremendous potential to absorb the huge number of unemployed people.

Only polices and meager incentives are not sufficient to make farm sector appealing for youths. The root causes behind the painful status of Nepal's agriculture sector are less visible in public debates. The main reason why people, especially youths, are not taking up agriculture is the absence of effective supply chain that can ensure the market of their produces. What matters to the farmers is the guarantee that they can sell their produces at satisfactory prices without any hindrance.

But this critical aspect is often addressed by the government’s policies. It is general phenomenon of market that once the production goes up of any product it will bring down the prices with higher supplies, consequently leading to disincentives to farmers to continue this occupation.

Farmers have been struggling to secure the market where they can sell their produces at profitable prices. In the context of Nepal, absence of markets for agro-produces is the main discouraging factor for the farmers. We have multiple instances of farmers disposing their produces such as milk, vegetables, sugarcane, eggs, and fruits on the streets driven by their discontents over the absence of market to sell their products at the reasonable prices. Worse, farmers have to struggle to get the payment for the products from buyers. Classic case is with sugarcane farmers. We have been witnessing such phenomenon for the last several years. Every budget speech puts emphasis on promotion of agriculture offering different incentives to farmers. But the government policies are not in line with such promises. Such phenomenon continues to keep the existing farmers off the farms.

Farmers are compelled to sell their produces, sometimes for the prices below the cost of production, let alone making profit to continue the business. Entrenched network of brokers always keeps farmers from the direct access to market. Farm produces are sold at a throw-away price to unscrupulous brokers who have been enjoying handsome profit selling the same produces at sky-high price. Brokers are taking advantages of unorganized farmers who cannot wield power to press their demands as trade unions in other formal sector organizations. Well-connected brokers of farm produces always hold political as well as financial power to influence government policies in favor of them at the cost of interest of common farmers.

It is ironical that political leaders who always claim they are working for the welfare of peasants, never raise the issues of farmers seriously. Worse still, Agriculture Ministry never becomes the first-choice portfolio for political leaders. Every political party has a separate sister organization to oversee the welfare of farmers. But such organizations are a mere platform to escalate the political ladders. Most of the so-called farmers’ leaders in political parties do not even seem to have visited farms for several years making themselves unaware of concerns and problems of common farmers.

The relevant government agencies including Agriculture Ministry formulate policies and implement them focusing on how to increase production, largely ignoring the fact that assurance of market and reasonable prices are more vital before encouraging both existing and potential farmers for more production.

In 1965, then Prime Minister of India Jawaharlal Nehru introduced Green Revolution with the aim of making India self-reliant in farm products. It encouraged farmers not only ensuring easy availability of farm inputs and new technology but also ensuring the market for their produces. As a result of the farm revolution, production of wheat (for example) shot up to 55 million tons in 1990 from 11 million tons in 1960. Output of other food grains also surged significantly over the period with whopping rise in productivity.

It is a pity to note that we are importing more than Rs 100 billion worth of agro-produced every year. Our farm produces are being edged out of the domestic markets by cheap Indian products. The government has failed to announce the minimum support prices and ensure the market for the key farm produces. In lack of market for their productions, farmers have begun to feel agriculture is a high-risk sector. People are not showing interest in investing for large farms given the uncertainty of market and unpredictable prices. Our farms are small or of subsistence level where cost of production is far higher than those produced in large commercial farms in supplier countries. Nepali domestic markets are flooded with vegetables, fruits and other produces imported mainly from India and China where highly subsidized large-scale commercial farms enjoy far lower production cost. Cost of production of such products in Nepal is said to be more than 30 percent higher than those farmed in these neighbors. Cost of production and transport has been skyrocketing while prices of farm goods have failed to catch up with the pace. Big traders who have a direct link with Chinese and Indian suppliers and are dominating the Nepali market never bother to approach Nepali farmers.

The government should set up a permanent supply system to ensure markets and reasonable price of agro-products to break deep-rooted network of brokers who are stuffing handsome profits leaving producers and ultimate users at receiving end. Farmers are unorganized in Nepal. So they are voiceless and fall prey to the unscrupulous brokers who are holding control in supply network from collection center to big distribution center.

To widen the market base for Nepali farmers for their produces, the government should keep in check the uncontrolled imports of such produces which can be supplied by Nepali farmers. To bring down the cost of production to increase competitive edge of Nepali farmers, they should be provided with farm subsidies on seeds, warehousing, fuel, fertilizers and insurance. Weak road network to transport the products is hindering the supplies forcing farmers to sell their farm products to crooked brokers at very low prices. To ease the supplies to targeted market in time, the government should accord a high priority on the construction of green roads, that enhances the backward and forward supply system for production and distribution of farm goods. Keeping in view the high risks in agriculture especially from natural disaster, diseases, perishability, rapidly fluctuating prices (sometime unpredictable prices) in the market and vulnerability of impact from any abnormal situation in the country, the government should put in place the effective insurance system to cope with such adversities.

There should be lucrative price offer for produces and agriculture infrastructure should be developed to attract the youths into this sector. Only paying lip service for generating employment through agriculture revolution will not work if we continue to ignore the factors that have been deterring people from taking up farming.

If we compare the development performance under the Panchayat Raj from 1960 to 1990 and that under the multiparty system from... Read More...