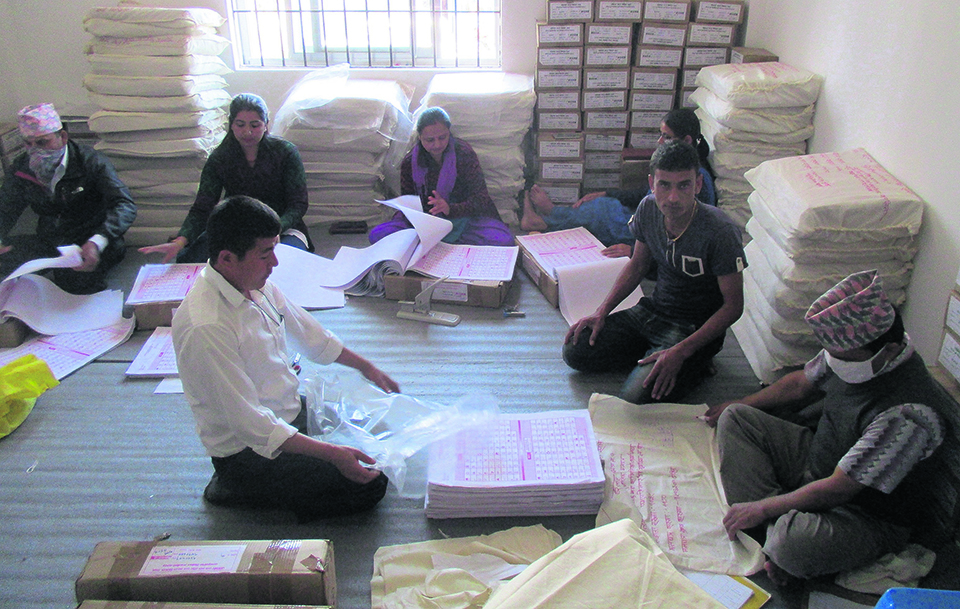 Election officials at the office of chief election officer in Ilam verify ballot papers cast by voters in mock elections held by election commission as part of its voter's education campaign on December 9. Bhim Chapagain/Republica

ILAM, Dec 12: Like in the previous elections, there were scores of invalid votes during the recently concluded parliamentary and provincial elections. The actual count of invalid votes is yet to be made public by the Election Commission (EC). Some regard this as a direct mockery of the voters' education conducted by the EC.

Despite pouring millions of rupees in voters' education, the attempt to educate voters on proper way of casting vote seems to have been ineffective. Tens of thousands of invalid votes have been recorded across the country during the vote counting so far.

Critics say the EC's strategy to educate voters in rush and without making proper preparation is the major factor. Despite complaints from all quarters, calling for reforms in voters' education in the past, the election body is reluctant to concede that its methods are ineffective.

In Ilam, though the vote counting has concluded, the office is yet to declare the total number of invalid votes cast in the parliamentary and assembly election.

Likewise, for provincial elections in constituency-1 (a) there were 101,061 registered voters, out of which 64,471 had cast their votes. Of them 2,653 votes were considered invalid.

In constituency-2 of the 102,995 registered voters, 71,042 voters exercised their voting rights. The invalid votes in the election during the vote count turned out to be 2,653.

In all the four provinces, the rate of invalid vote stands at 3.41 percent on an average. Higher invalid votes were reported from constituencies where political parties contested the elections by forming electoral alliance.

For instance, CPN-UML and CPN (Maoist Center) formed alliance to contest elections in Ilam constituency-2 (b). This provincial constituency has recorded the highest invalid vote rate. The constituency has 49,270 voters, out of which 32,984 had cast their votes. Of them, 1,300 votes were considered invalid.

According to Chief Returning Officer Krishna Prasad Subedi, the major reason for invalid votes was that the voters used their thumb to stamp the ballot paper instead of using the swastika stamp.

In fact, the number of invalid votes got even worse than the last elections, which critics claim reflects the inefficiency of the EC's voters' education.

In the last local elections few months ago, 138,565 voters had participated in the elections in Ilam. Out of the total votes cast, as many as 9,165 votes were invalidated.

Likewise, in the second Constitution Elections (CA) elections of 2013, the district had 163,554 registered voters, out of which 127,684 had cast their votes. Of them 120,085 were valid while the remaining 75,099 votes were termed invalid. Under the Proportional Representative category, of the 131,041 votes cast, 4,572 votes were termed invalid again.

Instead of getting better, the number of invalid votes in these parliamentary and provincial elections did not improve. The EC spent over Rs 5 million to teach voters in Ilam how to cast their votes. The election body also spent millions of rupees in awareness campaign through newspaper, television, radio and online mediums, but the outcome do not look promising.

DHADING, Nov 22: With very little time left for the parliamentary and provincial polls, the voters in rural parts of Dhading... Read More...

KATHMANDU, July 19: Nearly a month after the second phase local elections, the Election Commission (EC) is yet to make... Read More...

KHOTANG, June 19: With the objective of minimizing the number of invalid votes, the District Election Office (DEO), Khotang has added... Read More...