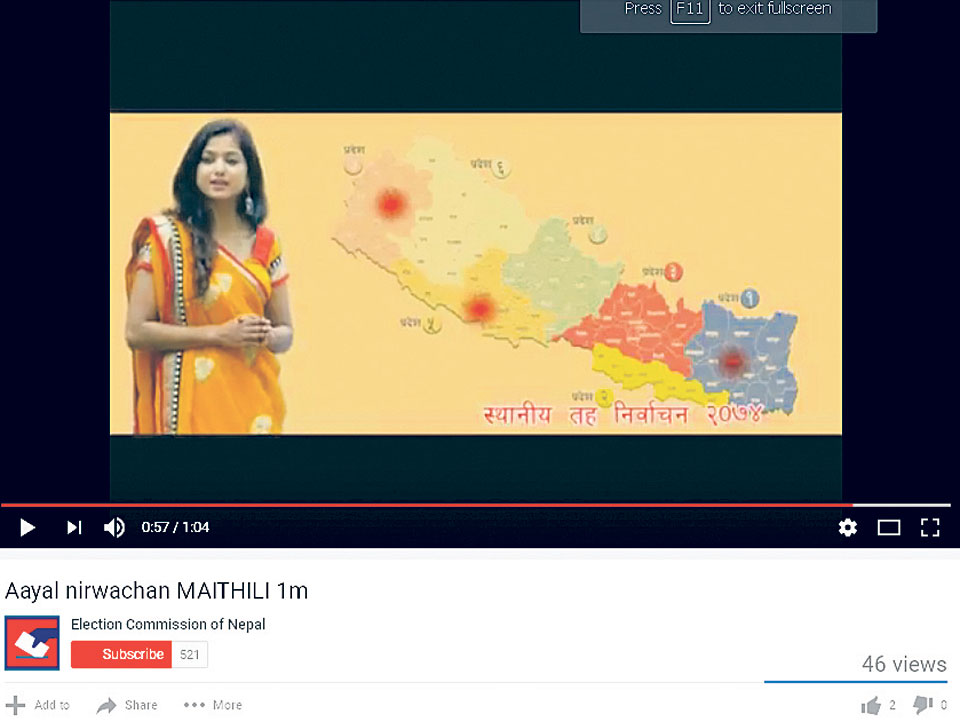 A promotional video of the Election Commission on Youtube has very few views. This particular video has only 46 views as of Wednesday evening.

KATHMANDU, July 19: Nearly a month after the second phase local elections,  the  Election Commission (EC) is yet to make public the full details of the invalid vote.
The number of invalid votes is high even through the election body spent millions on voter education.

Similarly, 17.11 percent of the vote was invalid in Kapilvastu Municipality and 22.62 percent  in Krishnanagar Municipality.  In Lalitpur where the election was conducted in the first phase, the invalid vote was around 17 percent .

“Voter educators went about teaching people how to  vote but people in the cities felt that they already knew everything about voting,” said Surya Aryal, chief of the Election Education Information Center (EEIC), which is under the election body.

“We spent around 420 million on social mobilizers  who were trained as voter educators, Each voter educator was paid Rs 12,000 as monthly salary and an additional 3,000  as allowance,” said Aryal adding, “This led to huge expenditures.”

Some election officials doubt that work on the ground was carried out with due diligence.

Apart from  mobilizing voter educators, the election body claimed to have  carried out various activities including mock polls, public service announcements (PSAs) over various media,  advertisements in newspapers and door-to-door campaigns. These activities, however, failed to yield the expected outcomes.

Millions were spent on the PSAs alone.

PSAs uploaded on Youtube were viewed by very few.  Only 138 people watched the PSA titled Voting Animation Process while another PSA – Aaidil Chunab Ho in the Tharu language – was viewed by just 24 people. Another PSA prepared by Maha Sanchar  was seen by 14 viewers.

Election officials say the invalid vote percentage is high compared to  previous elections. They  also realized that the voter education was ‘ineffective’ and a large number of voters turned in invalid votes.

The totally invalid ballot is around 2 percent. This means none of the seven candidates on the ballot paper received a valid vote.

“We are yet to calculate candidate-specific invalid votes although the totally invalid ballot is between 2-3 percent,” said Election Commissioner Narendra Dahal.

Major political parties forged electoral alliances just ahead of the candidacy nominations. But they  did not educate their  cadres about voting techniques and people even voted for parties that had not fielded any candidates.

The local election was also very complicated as candidates for seven different positions at the local units had to be incorporated into a single ballot.  This confused many voters, significantly increasing the number of invalid votes.

In view of the increased invalid vote, the EC has decided to change its voter education strategy for upcoming elections. “Traditional door-to-door campaigns proved a bit less effective mainly in city areas. So, we are planning  campaign-based voter education such as mock pollings and street drama so that a  maximum number of voters can participate and learn about voting,” said Aryal.

ILAM, Dec 12: Like in the previous elections, there were scores of invalid votes during the recently concluded parliamentary and provincial... Read More...