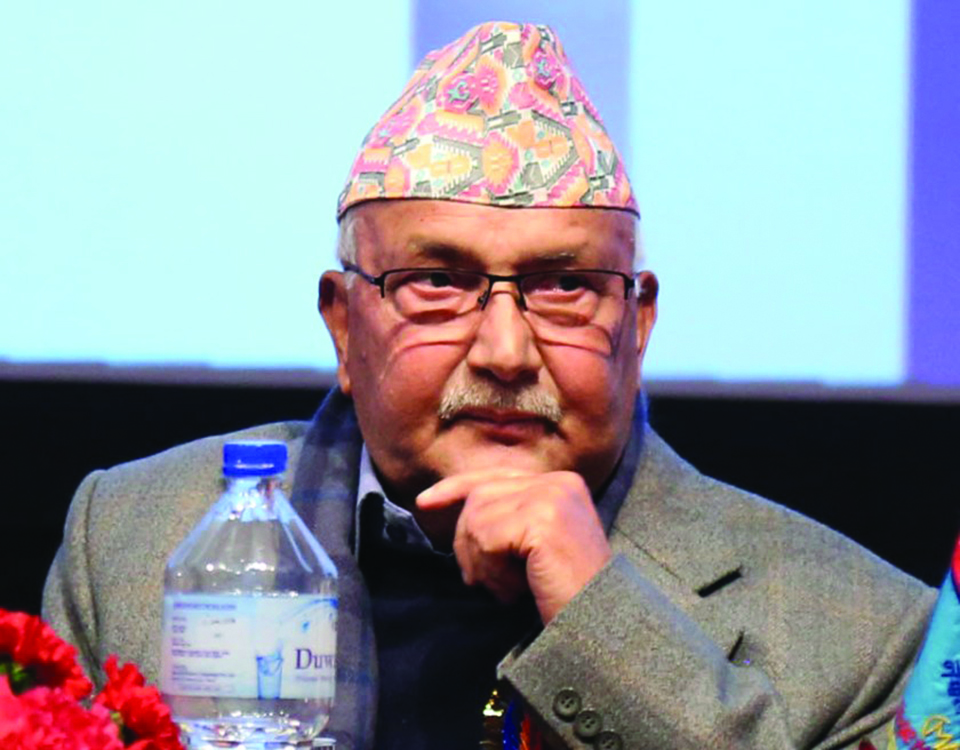 The Nepali intelligentsia is scandalized. Prime Minister Khadga Prasad Sharma Oli publicly challenged them to a cerebral duel and threatened to expose their duplicity. All that the petrified commentariat has been able to come up with so far by way of a response is an incredulous Et tu Brute? The cognoscenti are disconcerted that their nationalist hero has not only disowned them but gone to the extent of intimidating them in an unambiguous manner.

The indignation of highbrow hipsters is understandable. When Sharma Oli had ridiculed that the idea of republican Nepal was like travelling in a bullock cart to the moon, they had cheered. They had hung on to his blabber whenever the bluffer of Balkot took potshots at claims for fair representation, proportionate inclusion and substantive federalism. In the post-regression period after the coup by the law court in 2012-2013, Sharma Oli had emerged as the war hero of sorts for the White Shirts of Kathmandu rooting for the complete restoration of PEON (Permanent Establishment of Nepal) supremacy.

In the coalition government formed after the elections of the Second Constituent Assembly, it was common knowledge that the entire state machinery took its instructions from the boor of Balkot rather than the bane of Baluwatar. Sick and senile, Sushil Koirala existed as de jure Prime Minister even as the de facto chief Sharma Oli ruled through his handpicked henchmen and hangers-on. The intelligentsia spotted the rise of the strongman and enthusiastically applauded from the sidelines.

Perhaps the Gorkha Earthquakes of 2015 was the turning point in the career of the neocon from Jhapa. Premier SuKo had learned about the catastrophe from a Tweet of the Indian Prime Minister Narendra Modi. Never having handled anything more important than carrying bags of Tulsi Giri back in the 1960s or carrying out orders of Girija Prasad Koirala in 1990s, the Prime Minister owning  ‘only two cellphones’ was completely clueless about the urgency of emergency response.

The PEON, with unwavering support of the international community, spotted an opportunity in the crisis and struck with full force. Relief and rehabilitation of quake victims were put on the back burner where they remain to this date. Promulgation of a statute was prioritized over all other concerns. When President Rambaran Yadav urged caution, he was taunted out of all political conversations and threatened with likely consequences of his counsel. Madhesi protestors were shot into silence, often from point blank ranges. Indian interlocutors were humiliated and sent packing from their hotels.

Throughout the post-quake drama of 2015, Sharma Oli remained not only the face but also the voice and hands of the PEON.  The makeover of a ‘pro-India’ politico of the mid-1990s into a hyper-nationalist was complete. The nationalist intelligentsia welcomed the arriviste as their new savior who embodied the xenophobic fervor of Prithvi, Jang, Chandra, Mahendra and Marichman. Falling somewhere between logical and illogical arguments of nationalism, a completely demagogic form of Oliological rhetoric emerged that equated dissent with treason.

Once the constitution was adopted through the ‘fast track’, there was no stopping the mighty demagogue. Spinmeisters in the payroll of emergent plutarchy worked overtime to supply their charge with pearls of rustic wisdom. Discourteous, if not downright abusive, expressions such as ‘makhe sanglo’, ‘maka phui’ and ‘felling mangoes’ were decreed to be acceptable as apologists of the revisionist regime rewrote the grammar of political correctness.

Now that the mocha Marxists have completely subsumed fire-breathing Maoists and Pushpa Kamal Dahal has been reduced to the level of a letter-head head of the bizarrely named Nepal Communist Party (NCP), it doesn’t appear strange that the Madhesi campaigners against the controversial constitution have to prostrate before the PEON to save their skin. When an extremist group that had waged armed insurrection for over a decade had to surrender and beg for forgiveness, there was little that peaceful protestors could do to make themselves heard in the cacophony of jingoistic passions.

The Oliological bearers of the Palanquin Press chaired Sharma Oli into Baluwatar when he acquired de jure status after defeating the enfeebled incumbent in a straight contest. By the end of 2015, it appeared as if Premier Sharma Oli had more supporters in the Nepali Congress than in his own party. In addition to his native cunning, sponsorship of the PEON and generous support of the emergent plutarchy, he owed his rise partly to the Palanquin Press and the fawning intelligentsia. He thanked them all profusely while exiting Baluwatar. He had gauged correctly that support of the ‘useful idiots’ of media and intelligentsia would be crucial during forthcoming elections.

Once enthroned with the two-thirds majority, Sharma Oli had little use for bearers of his demagogic palanquin. He pitted the PEON against plutarchy to cut both down to size. The PEON hit out with ‘Marsi Rice’ and Bhudigandaki scandals. The plutarchy responded by dragging the Fast-track project, Nijgarh Airport and Nepal Airlines procurement deals into controversy. The media and intelligentsia devoured planted leaks from both sides with relish and lost credibility in the process.

Meanwhile, Premier Sharma Oli was getting impatient. Having established his nationalist credentials and amassed all authority, he had little use for the meddlesome media and smart-alecky intelligentsia. His priorities have now changed. He knows the limitations of nationalist media only too well to treat them with respect. The Nepali intelligentsia is neither a competent interpreter of trends and events nor a respectable group with the influence to play a legitimizing role.

In Sanatan traditions that the controversial constitution has charged the government to uphold, the role of an intellectual is conspicuous by its absence. The Brahman is the interpreter of divinity. The Guru is the one who shows the path to truth and wisdom.  The Acharya is the teacher of existing knowledge about conduct, norms and behavior. The Pundit is an expert in the chosen area of interest. He, and very rarely she, could be an astrologer, a linguist, a musician or a counselor. The Purohit is the knower and preacher of reality of society. The function of the Pujari is the most mundane: All that he has to do is perform rituals on behalf of patrons. All of them belong to the class of conformist professionals.

Like in almost all religions of the world save certain sects of Buddhism, there is no role for those who question beliefs in the Sanatan Dharma. To be an intellectual is to be a heretic and at least an agnostic even if not an atheist. Monarchs held intellectuals in high regard because the group functioned as a check upon the excesses of the priestly class. Democratic rulers love the intelligentsia instead. The professionals and competent service providers can be used and thrown at ease by the powers that be.

Premier Sharma Oli is correct in his assessment that the loyalty of the media and intelligentsia has turned out to be fickle. He has issued threats to force them fall in line or face the consequences. The intelligentsia is equally correct in the evaluation that its role in the rise of the demagogic regime isn’t even being recognized, let alone appreciated and rewarded. Both sides are feeling betrayed. Without a fresh dose of jingoism, rapprochement between the two is unlikely.

The public debate about intellectuals—organic or otherwise—is an unnecessary diversion. The responsibility of an intellectual is so onerous and its rewards are so meager and such ephemeral that few chose that thankless role for themselves. With the monetization of public forums such as the media and the agora, public intellectuals have almost no space left to express dissent. The intelligentsia, however, are awash with opportunity at government and non-government think-tanks, universities and consultancies of all kinds. Their expertise too is facing challenge from a new quarter: The mass intelligentsia.

The asocial media has emerged as the mirror for Narcissus where the upwardly mobile with a new fangled toy in his—it’s primarily a male domain—hands splutters with nary a care for the spelling or the grammar: “Hear, yo earthlings! How very smart I am!” The uber-commentators that appear to have graduated from the University of Facebook with some of them boasting honorary Fellowship of the Academy of Twitteratis know the ‘truth’ and are absolutely sure about it. They adore the confidence of the Chairman Comrade Sharma Oli. With the mass intelligentsia ready to pounce upon his critics, Sharma Oli is confident that he can cut the media and intelligentsia down to size.

Unwavering confidence in his ability has brought him from Jhapa so far and there is little reason to doubt that it will take him much further in the xenophobic politics of Nepal.