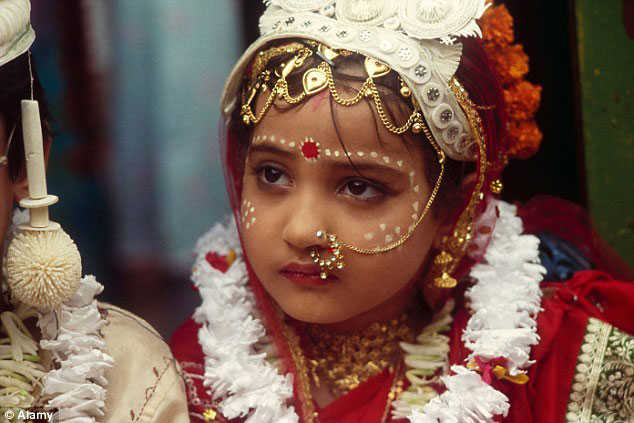 Some time ago, during the engagement ceremony of a relative, the purohit mentioned something about ‘baak daan’. That reminded me of kanya daan. I have always felt very uneasy about kanya daan. I feel the very words transform a girl into an object that can be given away. Not just the Hindus, even the westerners ‘give away the bride’. This prompted me to further explore the term kanya daan, which is a tradition passed on from generation to generation. It is religiously sanctioned and socially accepted. I have not found anything against it in religious scriptures either, nor could I find out when it started. But one thing was clear: a girl is a ‘kanya’ before puberty, before she menstruates. Since she needed to be ‘donated’ as per tradition, child marriage naturally followed.

The popular belief is that kanya daan ensures parents a place in heaven. This in turn encourages parents to continue with it.  According to Manu in Manu Smriti and Parasara, parents fail in their duty to their daughter if she remains unmarried after reaching puberty and they will be denied a place in heaven. Ancient Hindu scriptures dating back to 100 BC go a step further and instruct the girl to get married on her own if the parents don’t marry her off even after three years of attaining puberty.

Just the thought of kanya daan reminded me of an incident from 22 years ago. We were in the process of constructing our house. Every day, I would go down to the site and watch people at work. One fine morning the main contractor who hailed from Madhes came to me and requested a leave for his 9-year-old daughter’s marriage. I was stunned. I had heard about child marriage from my grandmother who was married at the age of 6, but that marriage took place more than 150 years ago. This was different. I could not even imagine a girl that young getting married in the late 20th century. After gathering my wits I asked him the reason for this marriage. His response shook me to the core: “Didi, we are poor people. We can’t wait for our daughters to grow up. The older they get the more dowry we have to pay.”

I was speechless. I could sense his desperation and helplessness.

Still in vogue
Many years have passed since and I had thought this practice was going out of fashion. Then, a few weeks ago, I received an email and the contents suddenly brought me back to reality. Swechhya Rajbhandari, a Teach for Nepal 2017 fellow posted in Dhanusha, was writing of the condition of girls in Dhanusha. The contents of the email kept bugging me and prompted me to write something about it. According to the writer, child marriage is still rampant in Dhanusha and most girls are married off by the time they reach 12.
Earlier, child marriage made a lot of sense; if a girl is going to another family, the sooner the better. Girls were to an extent considered burdens, parasites that used up valuable resources but did not give back anything as they were to be soon sent to another household. Investing in them was thus a waste. This justified stopping girl’s education. And it was the right thing to do at the time. Child marriage allowed the girl to learn the traditions of the groom’s family and assimilate with the in-laws at an early age, which is harder at a more mature age. This may sound uncomfortable, but these kinds of logic are still being offered in parts of Nepal to this day.

Oh yes, I have fought many battles against child marriage. Some battles I won and some I lost. Those I won, the girls became professionals in their fields of choice and those I lost, girls had to struggle for their education. Even as a child I was a crusader against child marriage. Sounds funny, right?  Don’t be surprised. I became ‘aware’ when I heard someone telling my mother, ‘why do you have to educate her, she will be married off soon?’ Yes it was about me and yes I was only eight. That was when I made my choice, ‘I will never get married’.

My inspiration was my cousin sister who was unmarried. My maternal uncle was my strength. He encouraged me to go to school, and be a unique individual. He taught me to defy everything that forced me to become domesticated, totally guided by traditions!  That was something that happened long ago. In time I too changed my mind after finishing my masters. I accepted my parents’ decision and got married. I can understand that every parent is not like my uncle. There is still the tendency among them to get their daughters married as soon as possible, even among educated parents.

Right to decent life
I am sure the thought has crossed your mind too at one point. I don’t blame you. I have heard parents say, ‘now that she has finished her high school, it’s time to find a nice boy and get her married off!’ Not a single parent will think getting their daughter married early will curtail her right to a decent life.

We all understand that marriage is an important part of the civilized world. It’s an institution, which calls for maturity, dedication and responsibility of concerned individuals. Let us face it, child marriage is a gross violation of a child’s rights and it tarnishes the sanctity of the institution of marriage itself.  Nothing can justify snatching away a person’s childhood and total demolition of their independence, emotional growth and an opportunity to build their personality, and to get educated and make you proud.

Parents, please understand, children are to be nurtured, loved and protected and allowed to blossom. Young girls are devastated by child marriage; so it is time to do away with it entirely. This is easier said than done. But for this we need a socio-cultural change.  Finally, I know some of you are saying, ‘why tell us? We are not the ones doing it’. Look around and you will see your relatives doing it, you neighbor is not far behind and your acquaintances in the village are definitely in it. So it’s time you made your move and tried to convince people to not commit the crime of child marriage. That is the least you can do for the sake of innocent little girls like your daughter. I know you never thought of it that way. Then again every drop contributes to filling up the bucket. Any way, it is not too much to ask for, right parents? Or is it?

The author is an educationist and author of several children’s books. usha@pokharel.net

A guide to gifting

It’s the season of weddings, and then there is the occasional birthday, anniversary, or celebration time that calls for a... Read More...