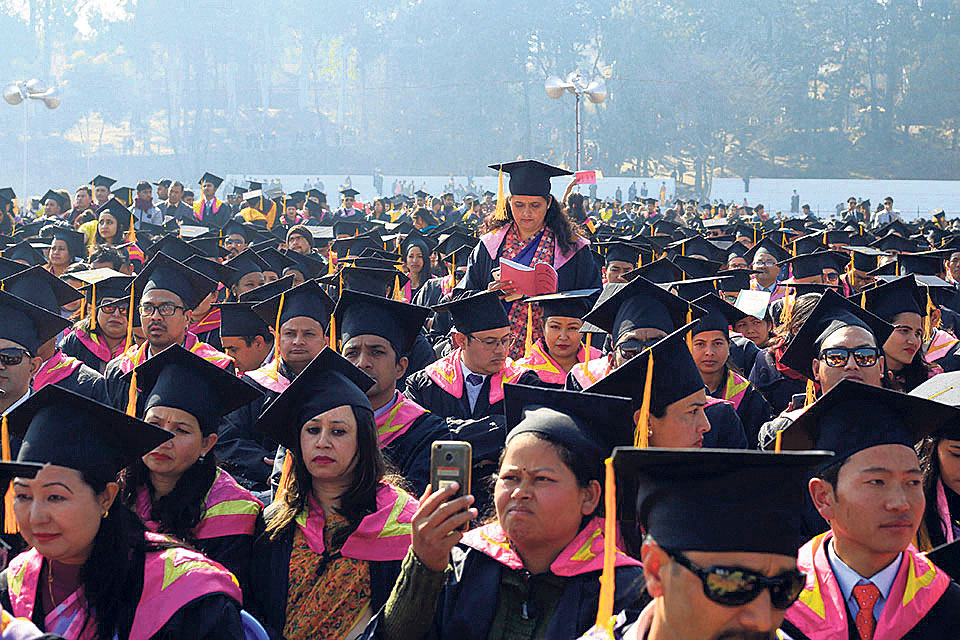 Nepal’s constitution and compulsory education act are more progressive than UN Conventions and other constitutions in terms of ensuring education as a human righ
Parliament of Nepal enacted Right to Free and Compulsory Education Act in 2018 to implement Article 31 of the constitution. With this, the country has upheld right to education as an enforceable sacrosanct human right. Unlike erstwhile constitutions, the 2015 charter casts an obligation on the state to ensure free education up to the secondary level (from grade nine to 12) and compulsory and free basic education for up to grade eight. The Act provisions that a person, who has not received basic education, is not entitled to get a government or non-government job after 10 years (after 2028). This has sent the message that the right to education is the part of basic human rights as well right to life with dignity guaranteed under Article 16. It enables any citizen to seek enforcement of the right by way of resort to writ jurisdiction.

The 2007 Interim Constitution brought a paradigm shift in the entire system of governance and fundamental rights. Article 17 envisaged, for the first time in constitutional history of Nepal, for citizen’s right to get free education up to secondary level from the state. However, there was no provision regarding ‘compulsory and free’ education.

The 2015 charter not only brought a substantial change in political landscape but also incorporated ambitious and progressive rights under the fundamental rights. For the first time, the constitution, under Article 31, advocated for the ‘free and compulsory’ education for Nepalis.

Three years after the promulgation of the constitution, the parliament enacted Right to Free and Compulsory Education Act. The Act says that every child in the age group of 4-13 has the right to ‘free and compulsory education in a neighbourhood school, till the completion of basic education. Likewise, children are also allowed to receive free secondary education. To ensure this right, the appropriate government, which means central government or provincial governments and its affiliates, is shouldered with a duty to provide school within two kilometres walking distance from children’s residents.

Progressive vision
Article 26 of the 1948 Universal Declaration of Human Rights (UDHR) obliges the states to ensure elementary education free of cost. The instrument lacks any express provision directing the state parties to provide ‘free and compulsory’ education to the children of school going age. Similarly, International Covenant on Economic, Social and Cultural Rights (ICESCR), 1966 places an obligation on the states to ensure right to education to all. Article 13 envisions that the primary education shall be compulsory and available free to all. As the Convention is observed as directory, not mandatory in nature, it seeks to ensure free education up to secondary level by “progressive means.” The Convention on Rights of Children (CRC), 1989 under Article 28 (1) (a) casts an obligation on the signatory states to make primary education compulsory and available to all for free.

In India, Constitution and Right of Children to Free and Compulsory Education Act (2009) commands the state to provide free and compulsory elementary (class one to eight) education to every child from six to 14 years old.

Likewise, the Swiss Constitution mandates the state to provide free elementary education in government schools. The Chinese Constitution provides that the citizens have right as well as duty to receive quality education.

Compared to all these obligations and laws, it can be said that Nepal’s constitution and laws related to education are far more progressive than other documents of most other countries.

Grey areas
In India, the Act, 2009 prohibits institutions from carrying out any screening procedure of students or charging capitation fees. It obliges the state to increase the state investment in the educational sector and “regulating and managing” the investment of the private sector to make education service-oriented.

Nepali law fails to give effect to this obligation as it lacks legal arrangements to regulate and manage the private sectors. Thus it fails short of adopting any measures to regulate the private school fees. So, balancing the autonomy of private institutions and public welfare functions have become a contentious issue.

Uprooting illiteracy
Nepal has put in place strict legal arrangements to eradicate illiteracy. The 2018 act strictly instructs the parents to enrol their students in schools. It envisages that if they fail to admit their students in schools or deprive them from acquiring basic level education, they would be deprived from the facilities provided by the local bodies. The local bodies are mandated to hold dialogues with the reluctant parents and convince them to ensure the access of education to their children.

The report of School Sector Development Program (2016-2023) says that about 86 percent of children who enrol in grade one reach grade five and only 74.6 percent survive up to grade eight.

The 2018 Act provides that the persons who have not acquired basic level education would not be entitled to hold any posts in governmental offices, non-governmental institutions after 2028. Similarly, such persons would be debarred from holding membership in any company, firm or cooperatives or acquire shares in companies.

Legal maxim has it that every law exists to serve the common cause and the welfare of people. The makers of the Constitution and 2018 Act seem to have realized that in a developing country like Nepal, political democracy would be of little value without consolidation of economic democracy. Accordingly, they have enacted provisions to oblige the state to impart free and compulsory school education to children.

Thus it can be said that Nepal is serious, at least in terms of legal measures, to eradicate illiteracy and to ensure quality education, which is enlisted under Goal number 4 of Sustainable Development Goals (SDGs), to its citizens.  It’s positive.  But people will benefit only when they those legal measures are strictly implemented.

‘Wider participation must for eradication of illiteracy’

BARDIBAS, Oct 2: Minister for Education, Science and Technology Girirajmani Pokharel has said the government’s lone efforts would not be... Read More...

Meeting of Impeachment Recommendation Committee called for today
4 minutes ago