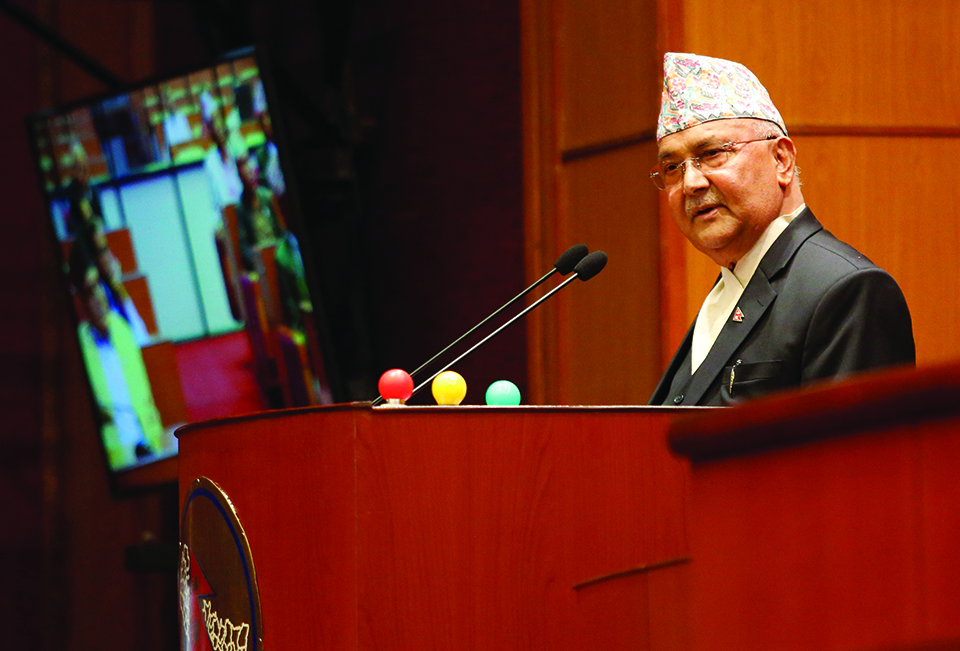 As the government of K P Sharma Oli has passed full five months now, it is the right time to appraise its works. Oli led the most powerful government in Nepal’s recent history after people gave thumping victory to his communist alliance (now organized under Nepal Communist Party) in local, provincial and federal elections last year. People were waiting for tangible progress in line with PM’s promise of ‘happy Nepali, prosperous Nepal.’

But his government is mired in one after other controversy. While some argue that the government is becoming authoritarian others say this is the arrogance of two-thirds majority in the parliament. Either case would be bad for a country that has recently emerged from decade-long transition and is struggling to institutionalize federal democracy. At this phase of constitution implementation, it is important to take all sides into confidence before taking any decisions of far-reaching consequences.

The government displayed extreme arrogance and insensitivity with Dr Govinda KC, the crusader of medical education reforms, last month. The government was bent on endorsing the National Health Education Bill without accommodating the recommendations of Kedar Bhakta Mathema-led committee. When Dr KC left for Jumla to stage Sataygraha, the local government of Jumla, at the  behest of federal government, prohibited protests in certain places, compelling Dr KC to stage protest from dark room of a local hospital.

Oli made demeaning remarks about Dr KC. Instead of working like a guardian of people, Oli presented himself as a person in power fighting with a noble soul of his own country. Even as Dr KC was losing consciousness, the government responded with apathy. Only when civil society and media started mounting pressure, the government became ready to negotiate and finally agreed to fulfill his demands. By the time, enough damage had been done to reputation of Oli—who was known as a patriotic leader earlier. Now he was seen as the protector of crony capitalists.

The “arrest “of vice-chancellor of Mahendra Sanskrit University from the departure lounge of  Tribhuvan International Airport made the government even more unpopular. Government declaration of prohibited areas of protests was equated with former King Gyanendra’s move. To protest is the fundamental right of citizens in any functional democracy. Muzzling it amounts to autocracy.

The government had started well. It announced to end syndicate and cartel in public transport. But there is no progress on the ground as people still have to pay high fare and suffer while traveling. In practice, syndicate and cartel still thrive. Rupnarayan Bhattarai who played an instrumental role in curving syndicate system was transferred from Department of Transport Management abruptly leaving behind much needed work to regulate public transport.

His government continued with Constituency Development Fund despite public outcry and media outrage against it. CDF has been the most abused fund of the taxpayers. Parliament should enact laws and policies and hold government accountable, but our parliamentarians are concerned about getting budget to spend under their discretion.

The government, opposition, court and civil society are five fundamental pillars of a functioning democracy, but in Nepal every pillar of our nascent democracy seems to be in turmoil at the moment. Main opposition Nepali Congress with 63 members in lower house of parliament could have been good opposition, but internal rift has made it weak. Under Sher Deuba the party has become rudderless. Congress should reinvigorate its party engines to present itself as constructive opposition by mending its internal differences to safeguard democracy.

The government granted Presidential pardon to murder convict Bal Krishna Dhungel, in collusion, as many have argued, with Maoist leaders. The judiciary has been politicized.  Since the ministers including prime minister are displaying arrogance and intolerance both in words and actions our civil society, which played pivotal role during 2006 people’s uprising, needs to resurrect itself by distancing themselves from cronies of political parties.

It is not hard to sense authoritarian impulses in K P Oli. Hugo Chavez of Venezuela and Recep Tayyip Erdogan of Turkey both were elected popular leaders who slowly evolved into authoritarian rulers changing the existing institutions to their advantage. Oli, who vehemently opposed Sher Deuba’s remark during election campaign that the communists will be authoritarian, should prove all allegations and suspicions of authoritarianism and totalitarianism wrong by abiding by democratic norms and values, visibly.

The government of KP Oli still has time to make amends. For that he and his ministers should fulfill their given responsibility instead of talking big and wasting time in petty things. People have pinned high hopes on this government to realize their long cherished dream of development. If the government with two-thirds majority also fails, people in Nepal will stop believing in politicians and political parties. The real problem for Nepali democracy will then start.