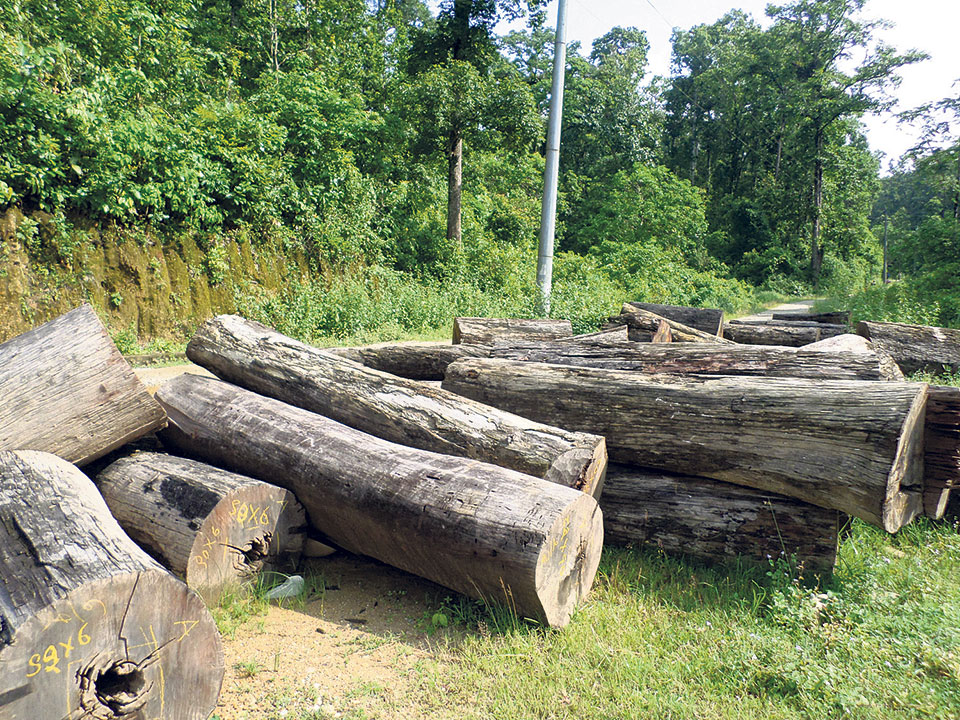 Tree trunks obtained as part of the scientific management program of the forest department are seen on a roadside in Sindhuli district in this recent picture. Photo: Anil Bhandari/Republica

“If the forest department wanted to scientifically manage forests, they would have been felling old and ill trees. However, you can see that they have cleared huge swaths of forests. They are felling trees indiscriminately,” alleged a local businessperson from Sindhuli, requesting anonymity.

He added that the permission to cut trees for the sake of scientific management of forests has become a boon for mafias. “They are now transporting timber worth millions of rupees. Officials of the forest department are partner in the crime,” he added.

Even the members of the community forests, which have been registered with the Forest Division Office of Sindhuli, are not happy with the new development. However, no one wants to raise their voices against fearing retribution from the timber mafias, he said.

Requesting anonymity, a community forest member stated that the community itself had been taking good care of the forests. They had planted new saplings at suitable areas and had been using the old and fallen timbers for several purposes.

“They did not discuss with us before carrying out this kind of program. Citing ‘scientific management’ they are felling trees indiscriminately,” he said. “This is clearly deforestation, and it will have a severe impact,” he added.

“At present, we have considered seven new and 26 old community forests for the program. The campaign has been effective,” said Narayan Shrestha, Chief of the forest division office. “This was actually a long awaited program, very important for healthy growth of any forest,” he added.

Shrestha claimed that only very old and least important types of trees have been felled under the program. He added that trees, which have high market price, are being grown and the less valued ones are being removed.

“Different trees have different values. You can’t put all trees in a single basket,” he said. “So, what we are doing now is, removing less important types of trees while preserving good types of trees,” he added.

He stated that even the community members don’t desire trees which have no market value. Commercial management of trees is also equally important, he said.

Huge quantity of the timber collected in the last few days is yet to be sold, according to Shrestha.

“We are auctioning the collected timber. Some portion of the timber has been already auctioned and consumers are happy about it. They have received millions of rupees,” Shrestha stated.

Karna Bahadur Thapamagar, Chairperson of Tin Patana Rural Municipality stated that trees worth over Rs 100 million have been cut in just single ward.

For scientific management of the forests, each forest has been provided up to Rs 300,000 by the forest division. This is a decade long program.

“This program should have been implemented much earlier. There are many old and feeble trees in the forest, and in the lack of such program, they remain unattended,” the division chief Shrestha noted.

Environmentalists have consistently warned of taking genuine approach to save the environment. Massive destruction of the Chure range and other forests parts has already fallen hard on environment, they warn.

Unprecedented and higher frequency of landslides in the mountains and floods in the plains, and similarly, harsh weather patterns have been attributed to environmental destruction.

Pine forests of Baitadi not fine

BAITADI, June 27: The pine forests in Baitadi district are facing destruction due to the reckless collection of resin. The... Read More...

PYUTHAN, May 26: Five years ago, a fire had engulfed the Siddhakanath Community Forest of Jhimruk Rural Municipality-4. However, at... Read More...

RUKUM, April 20: Timber worth Rs 20 million is set to be extracted from a single village in Rukum in... Read More...