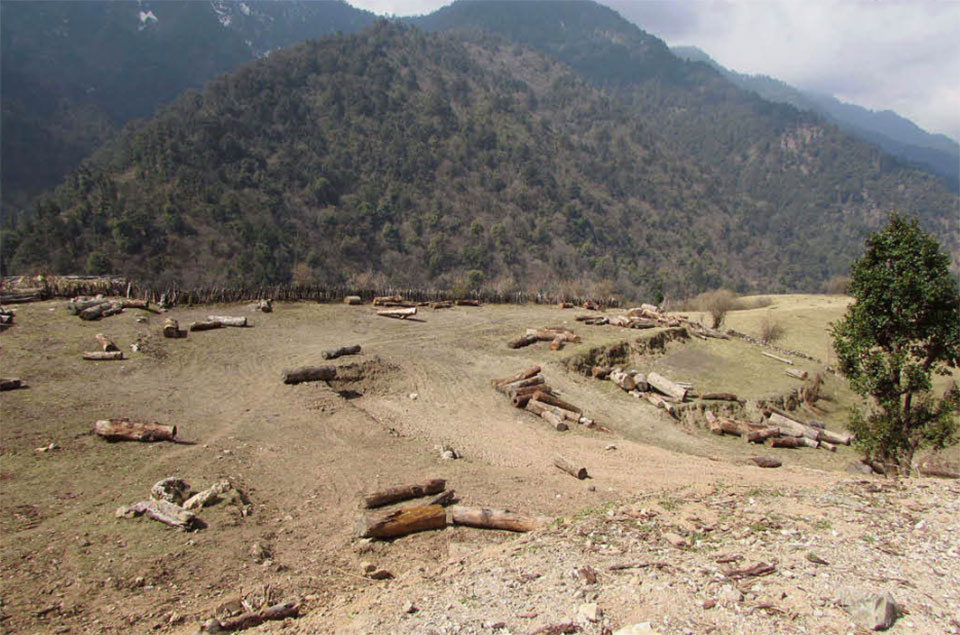 RUKUM, April 20: Timber worth Rs 20 million is set to be extracted from a single village in Rukum in the current fiscal year. Preparations have been made to export timber worth Rs 18 million from two community forests alone in Bhume Rural Municipality-1.

Timber with Rs 8 million has already been extracted from the forests while preparations are being made to extract timber worth Rs 10 million more. Lukumel Community Forest and Chauri Rigal Community Forest are the only two community forests that are exporting timber in such heavy amounts.

Lukumel alone has exported timber worth Rs 6 million in the current fiscal year. Fifty Thousand cubic feet of timber was sold from the community forest for such amount at Rs 120 per cubic feet. The timber was sold via a bidding process.

According to the chairperson of Lukumel Community Forest Group, Tara Prasad Pun, only the bad timber in the forest is being sold. He added that the timber was extracted only after the consumers committee of the community forests formulated a plan to do so. “The timber was the one that was damaged by the repeated forest fires in the community forest,” Pun claimed.

Pun opined that the transfer of the damaged timber would only help new plants grow smoothly in the community forest. He added that the timber sale was a legally approved process as the consumers committee had already given it a green signal.

Another community forest in the same ward, the Chauri Rigal Community Forest, has already received permission to export 100,000 cubic feet of timber in the current fiscal year. According to the forest users group, only the tender process remains to be completed to extract the timber.

Chairperson of Chauri Rigal Community Forest Group, Kamal Pun, said the community forest is going to sell a total of 12 million cubic feet of timber at the rate of Rs 120 per cubic feet in the current fiscal year.

Pun claimed that the clearance of dead wood from the forest will help the plants grow more easily in the forest. “There was wood damaged by forest fires while some trees have died and some dried,” he said, “These are hampering the growth of new plants.”

The division forest office concerned has claimed that no permission was given in the current fiscal year to extract wood from these forests. “The timber was extracted as per the permission issued in the previous fiscal year,” Division Chief Devendra Lal Karna said, “In addition, the permissions were issued from West Rukum Division Forest Office.”

RUKUM, March 28: The locals of Magma in Banfikot Rural Municipality-6 of Rukum (west) were hopeful of getting temporary job... Read More...

KATHMANDU, June 18: Locals and some forest officers in Sarlahi have accused the District Forest Officer (DFO) and other forest officers... Read More...

RUKUM, Jan 17: The Aathbiskot Municipality in the district has come up with a noble idea to minimise death rate... Read More...

Govt organizations now have around 43,000 tons of chemical fertilizers in stock: MoALD
19 hours ago