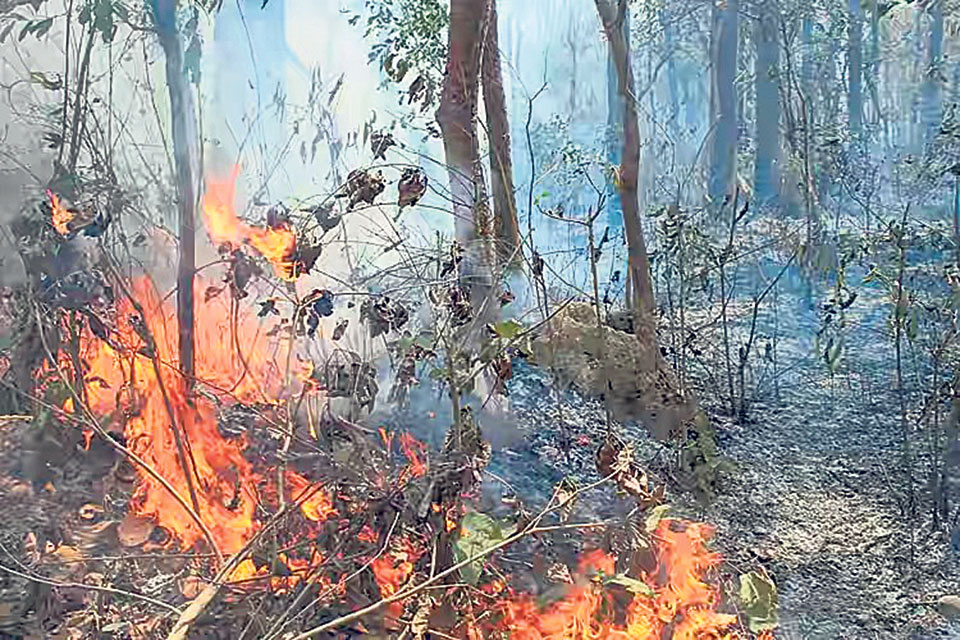 A wildfire is seen spreading in the forest of Sarumarani village, Pyuthan on Saturday. Photo: Samsher Bikram GC/Republica

PYUTHAN, May 26: Five years ago, a fire had engulfed the Siddhakanath Community Forest of Jhimruk Rural Municipality-4. However, at the time, the locals were able to contain it within some hours.  However, this year, locals remained helpless as the fire raged through the forest and destroyed it. Fire lept through the woods on Wednesday and locals have been powerless in bringing it under control.

Man Bahadur GC, a resident, said that “in the past four days the wildfire has eaten up all the forest and it’s disconcerting to see the extent of the damage.”

The community forest was considered an exemplary one in terms of management. Locals were growing new plants; they were also getting benefits from the old trees. Its members collected timber, grass, fodder and herbs. “Over the past five years, we worked very hard to preserve the forest from fire. But this year all our efforts were destroyed by the fire,” said Man Bahadur.

Locals criticized the local administration for not offering any assistance to bring the fire under control. Until Saturday, the fire continued to spread to other community forests.

“When the fire was spreading on Wednesday, only the members of the community forest seemed to be worried. They tried to douse it. But when it spread to other forests also, other locals joined hands to bring it under control, but nothing worked,” said a local Dakendra Bikram GC. “Due to the extended period of the fire, our environment is full of smoke. We are having difficulty to breathe.”

Just like GC said, smoke could be seen from far away in the village. Smoke in the air has affected young and older people alike. Locals do not precisely know how the fire spread. “It could have started due to natural reasons or by some one. We don’t know,” said Dakendra.

Since the past few days, heat in the area has increased, and while residents were struggling to cope with the excess increase in temperature, the fire has added to their woes. The wildfire has damaged drinking water pipelines to the area creating drinking water shortage.

“We are facing problems on several fronts including water shortage, excessive heat and attacks from wildlife animals that are entering residential areas to escape the forest fire,” said Dakendra.

Man Bahadur stated that the scenario is terrifying and complained that the administration is not serious about it. “Monkeys, boars have entered our settlements, they are restless and hungry. It’s a dangerous situation.”

Meanwhile, Damodar Sharma, chairperson of the Federation of Community Forest Consumers Group, Pyuthan, stated that efforts to douse the fire have not been effective due to the challenging topography of the area.

“It is not easy to reach the jungle areas with equipment to douse the fire. We don’t have such tools ready beforehand. Similarly, we don’t have trained human resources,” said Sharma.

According to Sharma, fire this time has been so damaging that over half percentage of forest in the district have already been affected. “It has not yet come under control yet,” he said. “It is very challenging.”

He added that efforts are being made to contain the fire. Several departments are being consulted for this.

Sharma also accused ‘some people’ of being insensitive and starting the fire, though he accepted that there was no evidence to implicate anyone for it. “People are negligent, and they light a fire in the jungle for their petty interest. Sometimes, it spreads wildly,” he said.

The district has not experienced rain in the last

two months. If it had rained, the fire would not have spread so fast, locals say. “But even now, if it rained, it would be a boon for us,” said Dakendra.

Joint teams of Nepal Police, Armed Police Force and Nepal Army have been deployed in several areas to contain the fire. However, they have also lamented a lack of resources to bring ‘the huge fire under control’.

According to Hari Poudel, a ranger at the Division Forest Office, Pyuthan, the lack of awareness among forest consumers’ committee members is a huge problem. “Some people are so negligent that they lit a fire at sensitive areas, they are not aware,” he said. “It is challenging to ascertain who does that, but once it spreads, it goes very wild,” he added.

He even assumed that some people might have put the jungle in fire due to conflict with wild animals. “Commoners, when they are too much bothered by wild animals, they might have gone to the extreme and started the fire,” he said.

There is a total of 78,049 hectors of forest in the district. “Much has been damaged now,” Poudel stated.

Forest fire goes out of control in Syangja district

KATHMANDU, Feb 3: A forest fire in Fedi Khola Rural Municipality-2 of Syangja district has gone out of control. ... Read More...