Every day is a Heritage Day in Panauti

Panauti is indeed a living museum, where the cultural and traditional values are kept intact.

The early medieval monuments of Panauti are included in the tentative list of the UNESCO World Heritage Sites since 23 May 1996.  The ancient human settlement of Panauti stands on a single rock, which was not much affected by the mega earthquakes of 1934 and 2015 that shook the large areas of Nepal causing 20,000 and 10,000 human casualties respectively.

Panauti, located 32 km southeast from the centre of the Kathmandu Valley, is known for tangible and intangible cultural heritages. UNESCO has mentioned in its World Heritage Sites tentative list that the architectural complex at Panauti is situated in a scenic position at the junction of the sacred confluence of the Roshi Khola and Punyamati Khola. It has also mentioned that the principal Indresvar Mahadev temple, in traditional Nepali style, was originally built in 1294. Other structures include the 17th century Brahmayani temple, other temples, inscriptions, sculptures, and traditional houses. There are temples, ancient structures, and public shelters in an interval of every furlong in the walkways of Panauti.

Panauti is considered as a sacred town by both the Hindus and Buddhists.  Panauti is believed to be Paanchaal Nagar of the Mahabharat era, where the princess Draupadi, who was married to five brothers of Pandavas, was born. Panauti, thus, has potentialities to be redefined as one of prominent places of the Mahabharat circuit.  There are many sculpts of Pandavas along with Draupadi in Nepal and India.  However, single sculpt of Draupadi stands only in Panauti. Perhaps, this is the only sculpt of Draupadi of such kind having archaeological value in the world.

Hindu mythology has it that the Hindu Gods had their stories of solitudes to get themselves purified from the sins they incurred. They are linked with the Panauti Tribenighat, the meeting point of three rivers in Panauti. Among the three rivers, two rivers Punyamata (also known as Bhokhusi) and Roshi are visible, whereas another sacred river Leelawati is invisible.  Pilgrims from far and wide take a  plunge in Panauti during a month-long Panauti Makar mela that takes place once in twelve years.  The belief is that a holy dip in the Panauti Tribeni would wash away the sins of pilgrims. 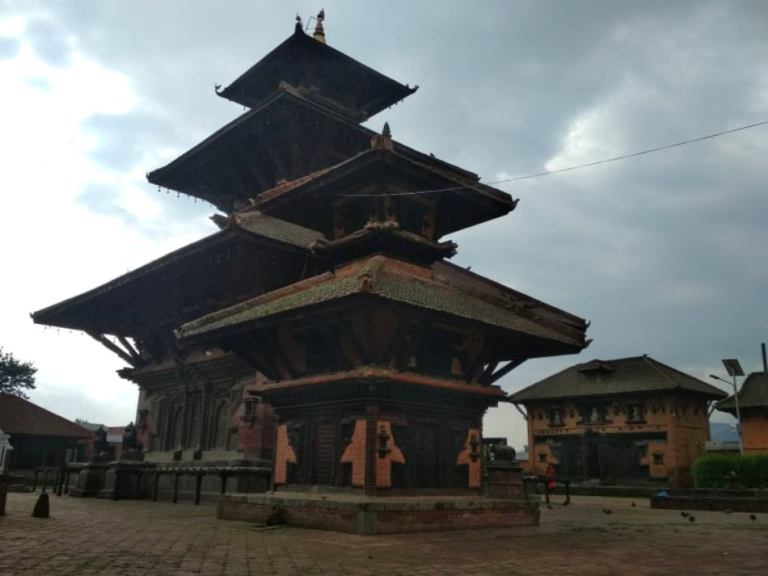 Panauti is also birthplace of Prince Mahasatwa, popularly known as Namabuddha. Legend has it that Prince Mahasatwa cut the flesh of his own body to feed a starving tigress surrounded by new-born cubs.  Prince Mahasattwa who attained the Buddhahood, is said to be the earlier incarnation of Shakyamuni Buddha. Namabuddha, where relics of Mahasattwa are kept, is a sacred place for pilgrimage for both the Hindus and the Buddhists. Namabuddha is situated on the hills adjoining the east of Panauti. Namobuddha rightfully deserves a prominent place in the UNESCO World Heritage Sites with a separate entity.

It is believed that Yomari, a famous delicacy of Newa Community, was first invented in Panauti. The Yomari Punhi celebration is said to have begun from Panauti. Legend has it that the wedded couple—Suchandra and Krita, invented Yomari. The new delicacy was at last disseminated among the residents. As the food was enjoyed by all, the bread was named Yamari, which in a real sense signifies 'scrumptious bread'.

It is also believed that around the same time the couple offered Yomari to the lord of riches, Kubera. He was much pleased with the taste of Yomari and with the blessings of Kubera, the tradition of Yomari Punhi celebration started on the second day of the full moon. These days, Newa community celebrates Yomari Punhi with much fanfare.  Yomari has become a part of menu of many restaurants, where Newa cuisines are served.

Each year, the clans and communities of Panauti are engaged in more than a hundred events of intangible cultural heritages.  It would not be an exaggeration to say that every day is a Heritage Day in Panauti.  Collective efforts of the Department of Archaeology, Panauti Municipality and the civil society are quite commendable to preserve the monuments and cultural heritage of Panauti. More efforts are required to place the early medieval architectural complex of Panauti in the full-fledged list of the UNESCO World Heritage Sites.

After the Kathmandu Valley, Panauti is indeed a living museum, where the cultural and traditional values are kept intact.

Expressing herself through art

Amidst all the artists who are taking to social media to display their work and gain recognition, illustrator Untamed Anatomy... Read More...