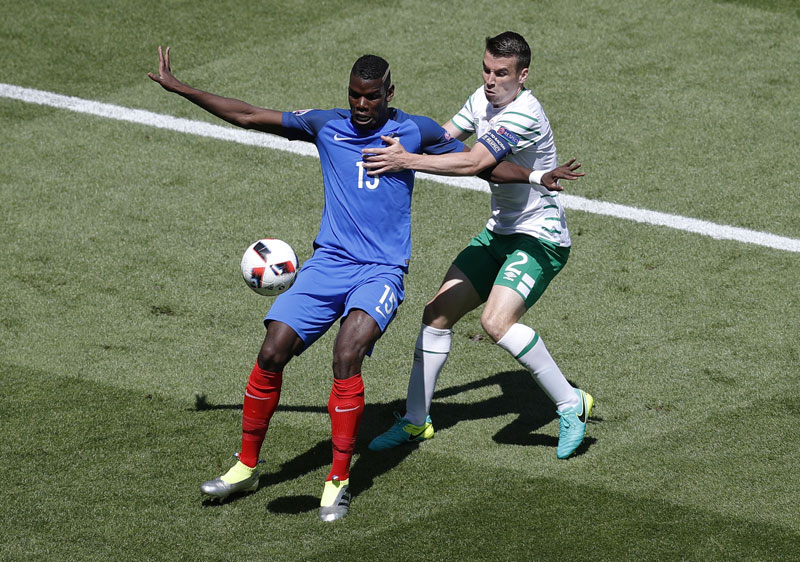 PARIS, July3: France is facing Iceland in a European Championship quarterfinal on Sunday. Here are five France players to watch:

France's tournament would have been even more of a challenge were it not for goalkeeper Hugo Lloris.

He was ready from the off, making an alert save to deny Romania forward Bogdan Stancu from point-blank range in the fourth minute of France's Euro 2016 opener.

In the group stage, the Tottenham goalkeeper kept clean sheets against Albania and Switzerland, and then put in a commanding performance against Ireland in the round of 16.

With Ireland 1-0 up and France under pressure, Lloris made a great save low to his left to keep out striker Daryl Murphy's curling shot. And early in the second half he clawed away James McLean's fizzing cross from the left before it reached Shane Long at the back post.

Young Lyon center half Samuel Umtiti has no international experience.

So, what a time to be making your France debut — in the quarterfinals of a European Championship.

With Adil Rami suspended, Umtiti is likely to be picked ahead of Manchester City's Eliaquim Mangala, who has looked out of form in training.

Umtiti is not as strong as either Mangala or Rami, but has pace and positional sense — and he is a better passer from the back.

One unanswered question. How will the 22-year-old Umtiti, who had a poor Champions League campaign this season, cope with the pressure?

France is still waiting for a commanding performance from its midfield star Paul Pogba.

Considered among the most sought after players in football, he is constantly linked with a move away from Juventus, where he has won four straight Italian titles.

But while the 22-year-old Pogba often lights up the Italian league, he rarely does the same for France. Aside from a dynamic first-half performance against Switzerland, where he twice hit the crossbar with shots from distance, he has been a disappointment at Euro 2016.

Backing up Pogba is teammate Patrice Evra, who says "he'll be there for us when we really need him."

Forward Antoine Griezmann has shaken off a lethargic start to become the spearhead of France's attack.

Coach Didier Deschamps then dropped him for the next game against Albania.

If that was a wake-up call for the highly-rated Atletico Madrid forward, then it worked.

Griezmann came off the bench to break the deadlock against Albania with a sharp 90th-minute header, and then scored twice in quick succession against Ireland last weekend to overturn a 1-0 halftime deficit.

He seems to be timing it right for France.

But, Giroud is slowing winning fans over — though not for his goal scoring feats. Although Giroud headed France in front in the opening game against Romania, he has squandered golden chances since then.

He impressed in the round of 16 come-from-behind victory against Ireland. His excellent headed lay-off set up Griezmann for the winning goal. He also put Griezmann clean through late on with a cushioned pass only for Griezmann to miss a great chance for a hat trick.

The 29-year-old Giroud may never blossom into a lethal finisher, but he is unselfish and contributes through his astute link play.