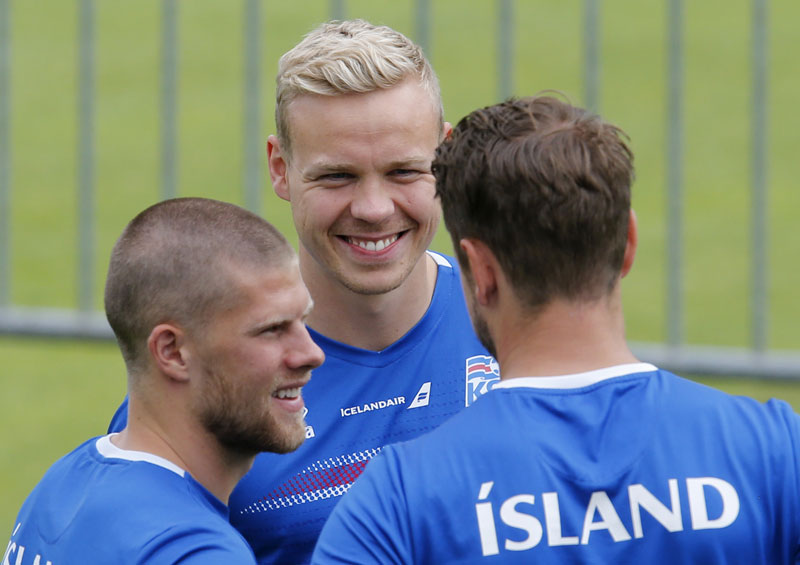 Iceland is facing France in a European Championship quarterfinal on Sunday. Here are five Iceland players to watch:

For much of Halldorsson's career, goalkeeping was his side job, while his main income came from directing movies and music videos in Iceland. At Euro 2016 he has a starring role in the tournament's best feelgood story. Now a full-time pro, Halldorsson has been a reliable shot-stopper so far in the tournament, though he did concede a penalty against England when he brought down Raheem Sterling. If the ultimate underdogs can somehow go all the way in Euro 2016, Halldorsson could be a key character in the inevitable Hollywood dramatization.

Man of the match against England with a goal and a desperate last-ditch tackle to stop an equalizer, center-back Sigurdsson has seen his stock soar at Euro 2016. Tough in defense, he was more than able to answer England with some English-style physical play of his own. After the game, Sigurdsson was scathing about how England underestimated the Icelanders, saying "they thought it would be a walk in the park". Currently at Russian club FC Krasnodar, Iceland's co-coach Heimir Hallgrimsson predicts clubs across Europe will be rushing to buy Sigurdsson after the tournament.

While he may play in the English second tier with Cardiff City, the bearded, Viking-like Gunnarsson had the better of England's Premier League stars in midfield. A tough-tackling, robust presence, he also launches effective long throws which led to goals against Austria and England. The second most-capped player in the squad, Gunnarsson has electrified the Icelandic supporters. After the final whistle against England, he led the players and fans in a slow clap and chanting ritual with echoes of New Zealand's rugby haka.

Not to be confused with defensive hero Ragnar, Swansea City midfielder Gylfi Sigurdsson reads the game well and plays a key role in Iceland's lightning-fast transitions from defense to attack. He was also Iceland's top scorer in qualifying with six goals, three of them scored against the Netherlands in upset wins. Sigurdsson takes Iceland's penalties and scored his only goal of Euro 2016 from the spot against Hungary in the group stage. By far the best known player in the team which started against England, his time at Swansea and Tottenham Hotspur gave him valuable knowledge of the opposition.

Scorer of the winning goal against England, with a little help from goalkeeper Joe Hart's slow reactions, Nantes striker Sigthorsson is capable of causing more upsets against top international teams in the years to come. He has scored 21 goals for his country, putting him five shy of the record at the age of just 26. That record is held by the 37-year-old former Champions League winner Eidur Gudjohnsen, who is still in the squad but is more of a leader in the dressing room than on the field, having made just one brief substitute appearance at Euro 2016.