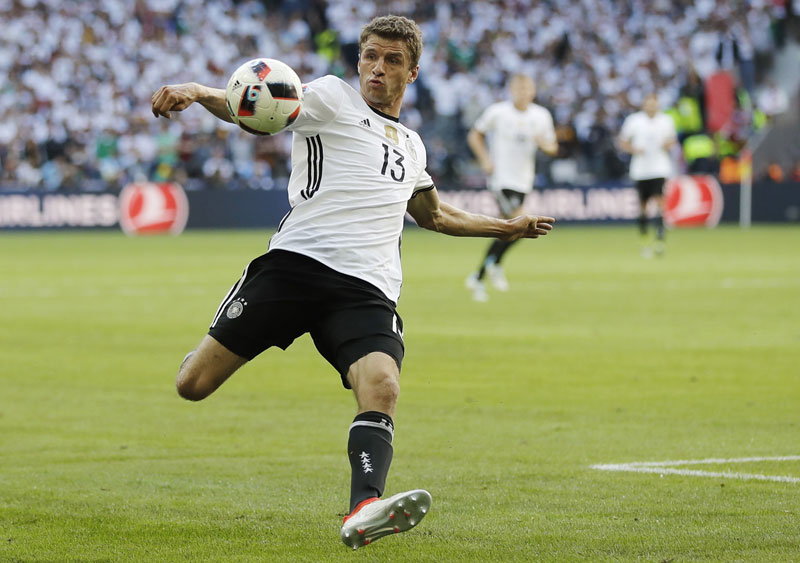 BORDEAUX, France, July 2: Germany is facing Italy in a European Championship quarterfinal in Bordeaux on Saturday. Here are five Germany players to watch:

TONI KROOS
The driving force in Germany's midfield, Kroos keeps the team pushing forward and dictates the pace of play.

Already an integral part of the World Cup-winning side in Brazil in 2014, Kroos' importance to Germany has arguably grown since his move from Bayern Munich to Real Madrid two years ago.

The 26-year-old has developed into a complete midfielder. He tracks back well and passes with precision.

Kroos has made 444 passes so far at Euro 2016 — more than any other player — and has a passing accuracy of 92.34 percent, according to the Opta statistics service.
"He controls the tempo for us, plays very clever passes, and has taken responsibility in difficult situations," defender Jerome Boateng said of Kroos at the team's tournament base at Evian-les-Bains. "He's become more dangerous shooting on goal and we hope it continues like that."

It's a role that he has grown into for Germany and his club side Bayern Munich.
Boateng anchors the German defense expertly — it's no coincidence the side is the only one yet to concede a goal in the tournament — while building attacks from deep.

After scoring his first goal for Germany in the 3-0 win over Slovakia in the round of 16, Boateng will be encouraged to roam forward.

Intelligent, precise and calm, Boateng has a keen eye for the runs of teammates, and he has a pass to match.

THOMAS MUELLER
Mueller has a curious relationship with the European Championship.

In nine games over two tournaments he is yet to find the net for Germany, a statistic that contrasts his goal scoring feats at the World Cup, where he has scored 10 goals in 13 games over two events.

It's not as if Mueller hasn't had any opportunities. At Euro 2016, he's missed a series of chances particularly in the games against Northern Ireland and Slovakia. So far in the tournament, Mueller has had 17 shots at goal.

Mueller arrived in France following his best season yet for Bayern Munich, scoring 32 goals and setting up 12 others, helping the side to a Bundesliga and German Cup double.
"As soon as a forward has chances it's a good sign," Germany coach Joachim Loew said before the Slovakia game.

MARIO GOMEZ
Gomez has had to overcome a lot to stake his claim for a place in Germany's squad, never mind the starting 11.

Gomez missed Germany's World Cup win in 2014 when he was left out of the squad after an injury-blighted season. After impressing for Besiktas in Turkey, he was recalled to the German side in November.

He has started Germany's last two games at Euro 2016, scoring in both and earning praise from Loew for creating space for the other attackers.

"The only thing that counts here for me is that we become European champions," Gomez said this week.

Neuer is considered by many to be the best goalkeeper in the world, though he'll be facing some competition in Italian veteran Gianluigi Buffon at the other end.

Neither goalkeeper has conceded a goal yet at the tournament, as Buffon was rested for Italy's 1-0 defeat to Ireland in the group stage.

Neuer has needed to be at his best at times in Euro 2016, particularly in the opening game against Ukraine and then again against Slovakia when he denied Juraj Kucka an equalizer before the break.

To be fair, he hasn't had much to do, but when he's been called into action he almost always delivers. Lapses in concentration from inactivity appear a thing of the past.
"Over the last four or five years he has shown that he is an outstanding goalkeeper in every area," Buffon said of Neuer on Friday.