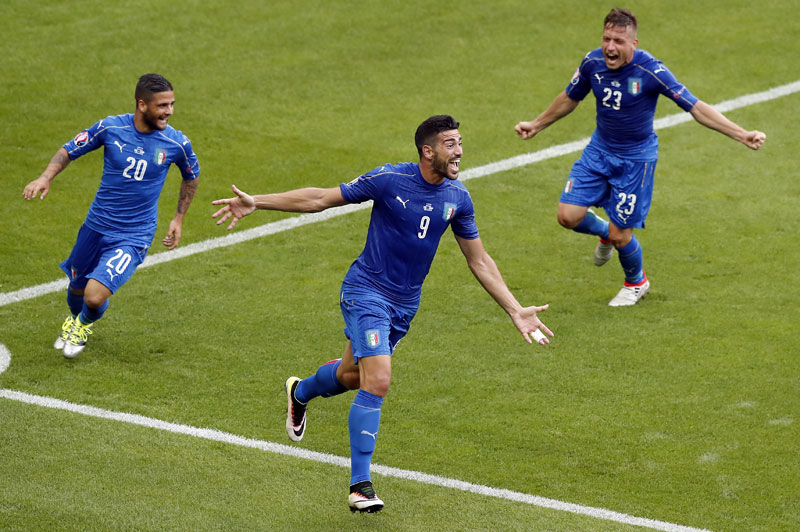 BORDEAUX, FRANCE, July 2:Italy is facing Germany in a European Championship quarterfinal in Bordeaux on Saturday. Here are five Italy players to watch:

Buffon has been considered the best goalkeeper in the world for years, though he is now facing some competition in Germany's Manuel Neuer at the other end.

Neither goalkeeper has conceded a goal yet at the tournament as Buffon was rested for Italy's 1-0 defeat to Ireland in the group stage, with the Azzurri having already won Group E with a match to spare.

Buffon has been an ever-present in the Italy team since making his debut in 1997 and is the Azzurri's most-capped player with 159 appearances.

At the age of 38, the Juventus goalkeeper shows little sign of slowing down.

Buffon is fresh from helping Juventus secure its fifth successive Serie A title, setting a league record of 974 consecutive minutes without conceding a goal in the process.

He also helped Italy shut out two-time reigning European Champions Spain in the round of 16.

Bonucci is capable of launching attacks from the back as well, and made a telling 40-meter pass for Italy's first goal in its 2-0 win over Belgium.

De Sciglio's performances at Euro 2016 have reportedly alerted the interest of a number of clubs but AC Milan insists the 23-year-old is not for sale.

That is a long way to come for a player who has been much maligned of late following an indifferent season and was expected to only play a bit part in this tournament.

De Sciglio put in arguably his best performance for club or country in the 2-0 win over Spain, shutting down one of the more quick-minded and experienced players on the pitch in David Silva.

The full-back, who also contributed to Italy's attack down the left side in a standout performance, credits Italy coach Antonio Conte for his resurgence.

"He helped me a lot because he made me feel his confidence all season, calling me up even in months when I didn't manage to give my best," De Sciglio said.

A late bloomer, Pelle is proving crucial to Italy at Euro 2016.

The Southampton forward scored in stoppage time in the opening win over Belgium and did the same against Spain in the round of 16.

That took his tally to seven goals in 16 matches since a goalscoring debut in a 1-0 win over Malta, at the relatively late age of 29.

As well as his goal against Spain, Pelle was a constant threat to the two-time reigning champion, winning headers and releasing attacking partner Eder with clever flicks.

The inclusion of Brazilian-born Eder caused much debate in Italy, with his coach at Inter Milan, Roberto Mancini, saying footballers born outside of Italy should not play for the national team.

Eder could change that sentiment after he scored a late winner against Sweden to help Italy secure top spot in Group E with a match to spare.

The forward also played a crucial part in the opening goal against Spain as goalkeeper David de Gea couldn't hold on to his free kick and the ball was poked over the line by Giorgio Chiellini.

Eder, whose great-grandfather was Italian, was born in Brazil and moved to Italy at 18 when he signed for Empoli.

A swift, diminutive player, he is the perfect partner for the bigger Pelle.