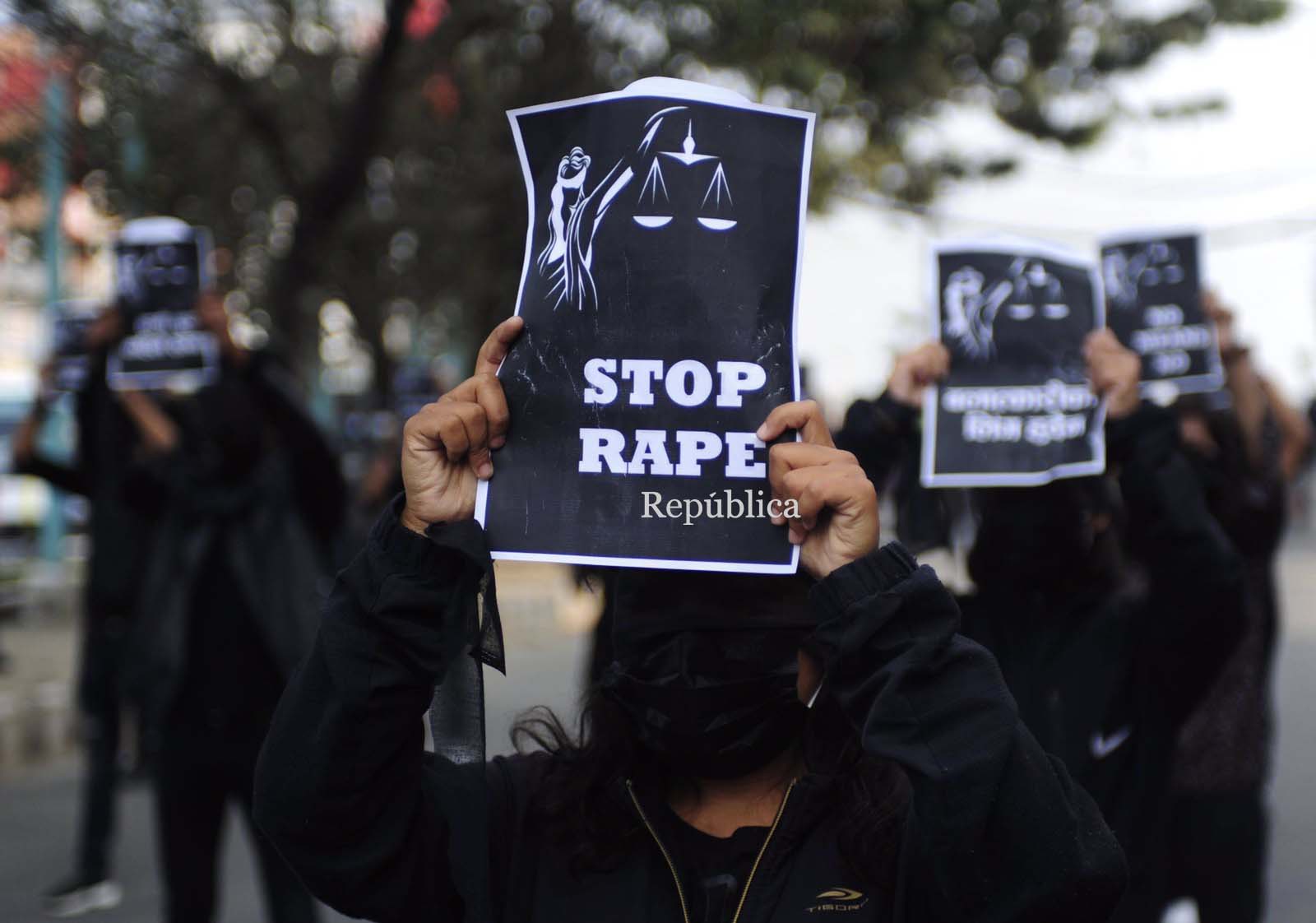 The way political leadership is working to end gender-based violence in our country is not inspiring enough. There should be greater commitment and more actions.

Nepal Police has reported an increase in cases of rape and gender based violence. According to Nepal Police, there were 1137 rape cases reported in the fiscal year 2073/2074 BS. The rape cases in 2074/2075 increased to 1480 and 2233 in 2075/2076 BS. The incidence of rape cases and sexual violence against women has been growing every year in Nepal despite Nepal having the tradition of protecting women and accepting such deeds as unlawful, unnatural, and sinful. Religious epics also convey that disrespect and violence against women lead to downfall of those who indulge in it.

The current situation of rape and sexual violence against women is worrisome. Political parties and public administration need to work to address this issue.

Sexual violence and rape are heinous crimes. It combines pain, degradation, terror, trauma, and seizure of women’s means of perpetuating life. Donald Brown, an American Professor of anthropology, has included rape in his list of human universals and has explained that it has been chronicled in every age and place. Men are the culprits in majority of sexual violence, though not all men are rapist.  A man always wants what a woman has—sex. He can steal it (rape), persuade her to give it away (seduction), rent it (prostitution), and own or lease it outright (marriage). Without well-built social rejection, strong legal consequences and public awareness, such activities cannot be abolished.

An old Nepali proverb goes Afni Chhori Nakharmauli Tannerilai Dosh meaning one’s daughter is a flirt, why blame youth? Society has always blamed the victims in this regard. This perception has encouraged culprits to look for inhuman practices. There are many derogatory names given to the victims of such abuses.

Media has an important role to play to pressurize public administration and police administration to take action against the culprits.  When Nirmala Panta was raped and killed, this incident shook the society. The civil society and youth organizations raised voice for justice to Nirmala Panta. Justice to Nirmala Panta movement has become a milestone in fight against sexual violence and rape.  Professor Stephen Pinker in his book Better Angels of Our Nature calls this “the rights revolution”.  The Nepali society is raising voice for “women’s rights” these days which was started in 1950 in the United States.

The youth protestors are launching different programs to end gender based violence.  We can see people protesting at Maitighar Mandala. We can see youth civil society leaders raising voice vehemently with the placard “you are the rapist”.  This has given a clear message that it is not a fault of a victim and it is not caused by the place where they live and by their attire. Many people would take it just as a protest, which they hear or read about every day, but it is, in fact, one of the most important factors that contributes to the decline of rape. If the society keeps on supporting such campaigns and movements, this will definitely help create gender based violence free society.  Every member in the society needs to be part of such movement.

Nepal has gone through massive political changes in the last seventy years. These movements have empowered people politically but failed to empower women in the same proportion. Recognition, empowerment, and implementation of gender equality help abolish gender-based violence.

Brown Miller says “rape has to do with power.” Thus women need to be in position of influence in a true sense. They need to be in the position to “make the rules of the game” more equal. Women’s right movements help nations fight gender-based abuse and violence. Keeping women in power and reorganizing the age-old division of labor helped the nation to fight with all sorts of gender-based violence. In the United States, it was an easy win for the females because there were more women in positions of influence and both sexes had become increasingly gender friendly.

Our laws were not strong enough to discourage people from committing rape crimes. A person could rape someone and walk free because the victims did not report the case because they were afraid of social stigma. Rape was an incentive for revenge or to show dominance since chastity was the selling point. Men could just “rape away” and nothing would happen, either they would have to marry her and have her as one of many wives or her family would sell her.

Susan Brownmiller’s book Against our Will helped the world make the paradigm shift happen. Her book shows rape from the victim’s point of view. It helped reform rape laws. It was published at a time when rape was not a crime in any way in American states. Today, it has been outlawed in all 50 states. Similar efforts have been made in our country but it is not enough. We need to keep speaking up for more stringent laws.

The UN observes November 25 every year as the day for ending violence against women. Such events help women gain greater economic and political representations.

Women account for over half of the total population of the country. If we cannot ensure safety to girls and women, the country will never be free of violence.

15 dead, 24 wounded in school shooting in Russia
6 minutes ago