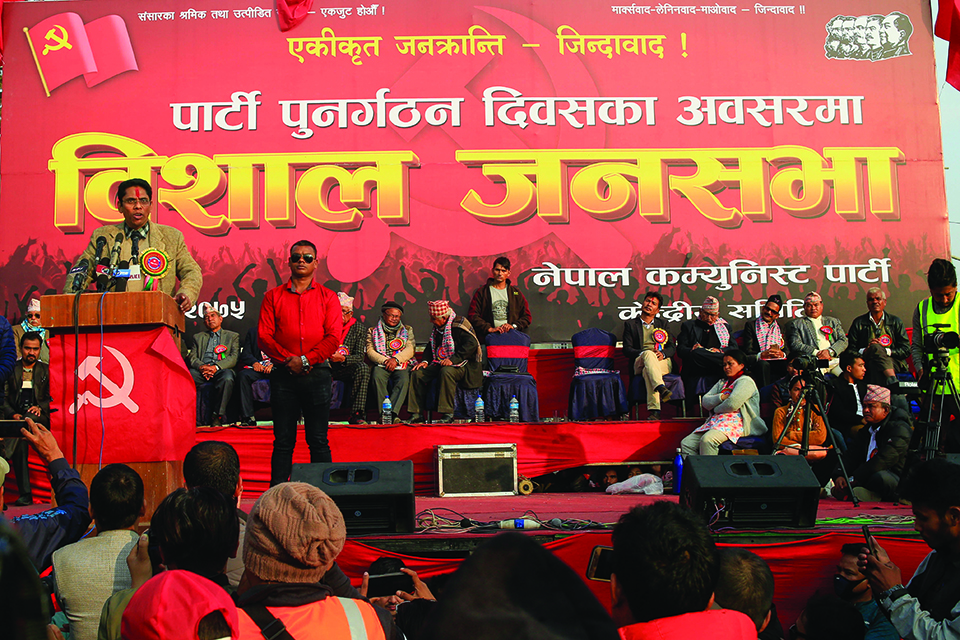 No excuse will address the voting public if a government with a two-thirds majority is plagued by cronyism, rampant corruption and unabated uncertainty. Yet, KP Oli and his small coterie continue to be in the news for the wrong reasons. Unremitting criticisms from virtually all quarters have unsettled the prime minister so much that he hits out left and right at anyone who raises an uncomfortable question. He forgets that quite a few provincial assembly members and parliamentarians have expressed dissatisfaction with the government’s overall performance.

The latest is that, some of his team members are worried about their own future in a party faced with an ailing captain. The mood in the polarized UML faction members within the NCP seems to be running helter-skelter for shelter, in preparation for the days ahead without their current center of loyalty at the helm of organizational affairs.

What might be the answer to all this? The Biplab group persists with its interpretation of the letter and spirit of the 2005-2006 political movement and not the existing parliamentary system. Spurning the comfort and convenience mainstream politics lavishes on a ruling party, why does it choose to lead a semi-underground life?

Amid doubts over the second Constituent Assembly being able to deliver the desired results envisaged earlier by the united Maoist party’s very reason for engaging in an armed insurgency for a decade, the Maoist party under Pushpa Kamal Dahal ‘Prachanda’ stood divided. Biplab, Mohan Baidya, CP Gaurel, Dev Gurung and Ram Bahadur ‘Badal’ and others broke away, as a consequence. Fresh differences infected the party over the modality for dealing with the political challenges. Baidya stood for putting unrelenting pressure on the mainstream parties through aggressive mass awareness campaigns in the open. Biplab, on the other hand, refused to abandon the idea of militancy as an option.

Initially Baburam Bhattarai rejected Biplab’s argument against holding the second Constituent Assembly polls without extensive discussions on the basic tracks to the road ahead. By the time Bhattarai came around to seeing sense in the argument, he confessed it was “too late now to reverse the process”.

Biplab’s group finds the merit of its stand confirmed on account of events in the post-2015 period. It reviles the manner in which foreign forces have had virtually a free hand in pushing forth their agendas through well-funded proxies in the guise of I/NGOs. National independence and sovereignty, together with qualitative improvement in the life of an average Nepali, including right to work and other basic services, is its main thrust.

The group’s November 24 mass rally in Kathmandu elicited a whale of interest across the Nepali political spectrum. “This is only the start. Wait for the coming days for yet fervent activity all over the country,” announced the organization’s spokesman Khadga Bahadur Biswakarma ‘Prakanda’. Leaders addressing the rally appeared to be in an upbeat mood. Their erstwhile comrades-in-arm, now sharing space with UML they once dubbed as close cousin of “rightist” Nepali Congress, appeared forlorn, sour and suspicious.

Although Biplab was not seen on stage, he rubbed shoulders with his party members among the crowds while other spectators watched the event without being aware of his presence. Apparently, this was calculated to create an enigma around him.

Mainstream parties are themselves to blame for the situation. Intraparty rifts and interparty differences have lowered their public image. Save for its experience, Biplab started from scratch. Today, the network of hideouts and contacts developed during the bitter decade-long insurgency stands an open secret under the debris of details well within the knowledge of its erstwhile fellow comrades.

Biplab’s representatives have discussed with senior figures the whole gamut of the political spectrum, including academics, bureaucrats, trade union workers, retired security personnel and prominent business folks. Baburam Bhatarai, who earlier prided in having authored the draft of the now-abandoned 40-point demand, is struggling to demonstrate his new party’s relevance for political space.

With the wisdom of hindsight, Biplab bitterly rues over having accepted the short-lived preposterous “Prachanda-path” that waylaid workers and threatened to drag the nation toward an abyss of disintegration. His cadres and district coordinators, according to a well-connected source, “prepare for any situation and sacrifice”. To stay relevant, they need presence; and to make impact, they need action.

If a confrontation between the NCP and a loose alliance between mainstream opposition parties were to be forged, the situation would fuel up. If it did, Nepali society would suffer severely, so shortly after the killing fields and dance of destruction witnessed during the decade-long insurgency, officially legitimized as a contributing factor to political “reforms”.

Nepal Communist Party (Revolutionary Maoist)’s General Secretary Mohan Baidya and his party colleague CP Gajurel belatedly realize that they were unwitting pawns in India’s chess game during armed conflict and many of the hidden agendas not publicly announced during the insurgency.

Marred in controversy in different countries, including the United States, Britain and Japan, the Universal Peace Foundation, an INGO devoted to religious conversion, triggered heated discussions in Nepal recently. The main opposition Nepali Congress protested the government’s involvement in the basically religious INGO’s program. So did various groups of RPP and the ruling party’s own members. Former Prime Minister Madhav Kumar Nepal was at the forefront as he had benefitted from the group whose founding head had been charged with tax fraud and jailed in the United States. Oli is believed to have risked so much to appease comrade Nepal in the mistaken belief that latter’s belligerence toward him would ease.

Communications and Information Technology Minister Gokul Baskota made futile attempts at defending Oli by recalling the participation of the late Girija Prasad Koirala and others of Nepali Congress leaders. So what? They too deserve their share of condemnation or commendation. Two wrongs cannot make an issue right. Which other South Asian heads of states or governments from Bhutan to the Maldives through Bangladesh, Pakistan, Afghanistan and Sri Lanka agreed to receive the award Oli was given? His coterie is at great pains in defending the acceptance.

The achievements boasted by the NCP and, to some extent, by the now-reticent Nepali Congress deserve an honest and thorough review. There is a new breed that concludes the nation is about to “collapse” unless things are urgently turned to a correction course. There’s a difference between an all-embracing sainted laureate and a parochially scented pleader of a political variety. The former lasts through posterity while the latter is destined to lose luster. Nepal’s neighbors are well aware of the approaching global trends. The US worries about the huge growth and presence of communists in a country like Nepal whose population ranks 48th in a world of about 200 nations.

Are we a nation without a benchmark? We are also a nation where formidable leaders have done their utmost to erase history inconvenient to their claims and acts or which place them in poor light as contradictory or perfidious. Be it the constant complaints about the sharp fall in Tribhuvan University’s standards and education sector in general, lethargy in the bureaucracy, consistently rampant corruption in all branches of government and deterioration in the law and order front, the conditions are worsening.

The irony is that if party-less Panchayat recorded better as a bench mark, why not in the existing “loktantra”, described as an outcome of 70 years of people’s unfulfilled dream for “Prosperous Nepal, happy Nepalis”? The benchmark for good situations happens to be the politically incorrect mention of the Panchayat period. Western academics make a big fuss about the right to reject, resist or face the prospect of return of the rightists in a democracy built on diversity of views.

Biplab’s group is not sitting idle though it is tight-lipped about what might be in its kitty next. The issue of core national interests is patently bringing the otherwise ideologically disparate groups with opposing views to a common point of agreement. Segments in Nepali Congress, NCP and various other forces are in constant consultation and coordination in preparation of a course that would address their common cause. They have also come to a conclusion, with the concurrence of some foreign powers, that monarchy is a credibly, and comparatively a distinctly better stabilizing institution than political parties alone in the existing free-for-all situation.

BIMSTEC might have a hard time taking off because of growing mutual suspicions and New Delhi’s aspiration to ignore... Read More...

Experts' conclusion: Air accidents increased due to lack of full compliance with ICAO standards
3 minutes ago