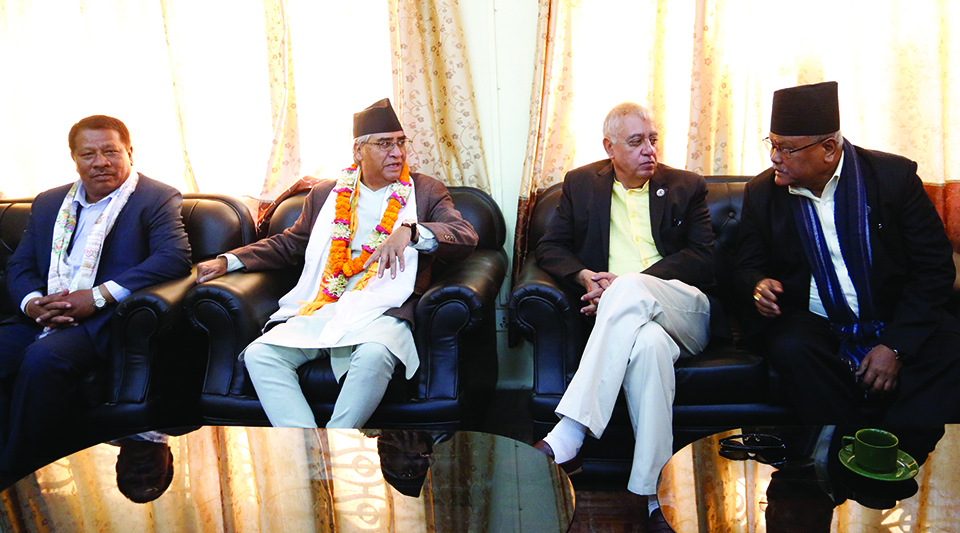 Nepali Congress can salvage its reputation by being true to its traditionally held principles that came in good stead for so many decades. It should abandon expediency of opportunism

It’s no more confined to speculation or rumor. The running fissures in the main opposition party, Nepali Congress, have spilled all over thanks to senior leaders washing their dirty linen in the open. Unsheathing their knives for next year’s party convention, where elections to new office-bearers are in for fresh terms, personality-based camps are being created and lobbied for, as the respective faithful ones close ranks in a show of their individual strength.

NC President Sher Bahadur Deuba publicly warned that carrying a Koirala surname to someone’s name was no automatic credential for organizational leadership. The four-time prime minister, who publicly claims his astrologers assure him of being premier three more times, thundered: “Where were they when we had our heads injured by Panchayat rowdies?” The question is as childish as it is ridiculous to make exaggerated justification of Arzoo Deuba being given election ticket last year.

Shekhar Koirala, in Birgunj, responded in a cutting slant but with relatively dignified posture and measured language in contrast to the party chief’s frantic and unbalanced outburst aired in public. He questioned the party president’s organizational performance and competence.

The unseemly war of words brought to the open the bitter feud between the organization’s two principal camps, though Deuba himself tried to emulate the Koirala family members by inducting his wife Arzoo into the second Constituent Assembly. Two years later, he ensured her a ticket for the general elections, though she did not make any notable contributions as an active member of the country’s oldest party before her 1994 marriage or after. Being Deuba’s spouse was her chief credential and sufficient for overriding the claims of party members who had been associated with the organization long before she took any serious notice of the oldest existing political party in the country.

In NC’s hierarchy, BP Koirala’s second son Dr Shashank Koirala is the general secretary. Although defeated in previous general elections, Girija Prasad Koirala’s only daughter Sujata Koirala led NC to the cabinet headed by CPN (UML) leader Madhav Kumar Nepal. She served as the deputy prime minister looking after foreign affairs portfolio. All along, Deuba maintained silence in the sidelines of Girija Prasad Koirala, a six-time prime minister. Moreover, Sujata’s doting father threw a bone at Deuba by encouraging him to nurse the new-found political ambitions of a basically NGO-activist that Deuba’s spouse had been.

Having migrated from pro-Soviet Communists (also known as Russian Communists), Nilambar Acharya’s name being accepted as ambassador to New Delhi could conceivably not be in doubt. Physically tottering but having patrons to prod Prime Minister KP Oli to name him to take position as our ambassador at New Delhi’s Barahkhamba Road, Acharya has played it smoothly for three decades since 1990. Known as a pro-Soviet communist until the 1980s, he got aboard the Krishna Prasad Bhattarai-led interim cabinet in the spring of 1990. Within Bhattarai’s Nepali Congress itself, there were whispers comparing the “the mystery man” with Bhadra Kali Mishra in the 1950s.

Anyone exercising critical faculties in proactively commenting on the 1950 Nepal-India treaty would figure in Delhi’s blacklist. The Dr Lok Raj Baral commission on Tanakpur concluded that the Tanakpur deal did not require approval of a two-thirds majority in parliament. Even as the Supreme Court’s subsequent verdict thought it otherwise, Baral was appointed ambassador to India.

During the party-less Panchayat of three decades, pro-Chinese communists every now and then brought up the issue of “unequal treaty” and “unfair agreements” with “expansionist India”. Pro-Soviet Communists, whose nominees flocked to various Soviet universities on scholarships, remained mum over the issue, especially after 1971 when India signed a 20-year treaty with communist Soviet Union on the eve of the Indo-Pakistani war over East Pakistan, eventually Bangladesh.

What were the NC elites doing while all these events took place? Silence then, and silence much of the time even today. They extol the virtues of Ganesh Man Singh and Krishna Prasad Bhattarai as if people have forgotten the way the duo was mistreated. Singh and Bhattarai distanced themselves from the party they founded, and whose cause they fought for and succeeded at various stages of long stints of struggle. Unprincipled and uncommitted power-seekers were to blame.

Girija Prasad Koirala, responsible for his two seniors’ disgust for making them irrelevant, managed to head a record six governments. How did this happen and how did the NC sympathizers among the elites present themselves in this regard? Party workers, including “youth” leaders’ docility turned senior leaders authoritarian.

Had BP Koirala lived long enough to witness the 1990 changes, he too might have suffered the back-stabbing his own party types thrust into Singh, Bhattarai and, to some extent, Girija Prasad Koirala. NC leaders, today, compose paeans to the defenders of democracy and propagators of great ideas because they no longer pose any political rivalry to the contemporary crop of ambitious men in the party. Yesterday’s leaders are cast as role models because their successors need history and heroes today and tomorrow. Invoking past leaders for votes is a beguiling strategy of buying and selling but not necessarily out of any honest regard, as if organizational politics was an exploitative enterprise.

In 1994, President Girija Prasad Koirala, fired by sheer personal fancy that he could fetch the party two-thirds majority, plunged the nation into snap polls. Instead, a hung parliament was tossed up, with CPN (UML) forming a minority cabinet by virtue of being the largest party.

As a matter of principle, communists are supposed to be NC’s natural opponents with whom they could never share power. This has been breached far too often these past 29 years to shock or surprise people inured to party leaders burying principle for power without any qualms.

In local polls, NC bewailed belatedly the day it joined hands with Pushpa Kamal Dahal’s Maoists, of all parties, in what turned out to be an admission that the Oli-led UML was ascending fast in voter appeal. Coalition comes at a cost, which was confirmed when NC abandoned its principles and pulled the rug from under Oli’s feet to lure Dahal into heading a Maoist-NC coalition cabinet.

NC played second fiddle to Dahal for a nine-month stint on the understanding that the baton of cabinet chief would be passed on to Deuba thereafter just as it played a subordinate role in Surya Bahadur Thapa’s government, even with a tacit understanding that he would step down after a year for NC leader to take over.

While NC dumped principles, Dahal ditched Deuba’s party to reach an electoral pact with UML for the 2018 provincial and general elections after his pre-determined nine-month prime ministerial term expired and Deuba took over. Backstabbing in Nepali politics is glorified as the play of tacticians. Hence, Dahal took the plunge after ascertaining which side would fetch him the best results, joining hands with Dahal for local polls and with RPP in provincial and general elections. In the process, NC’s credibility suffered a collapse from which it is yet to recover.

Some shortcomings notwithstanding, BP Koirala stands out as a highly prominent leader since 1951. For all its weaknesses, monarchy remains the most credible and acceptable institution to advice, caution and restrain the government in particular and society in general. NC can salvage its reputation by being true to its traditionally held principles that came in good stead for so many decades. It should abandon the expediency of opportunism and the hated spoils system. For inter-party ties, NC would be better off with other non-communists, including former panchas under various banners of RPP and Madhes-based groups. That may be the best available and feasible alternative in these trying times.