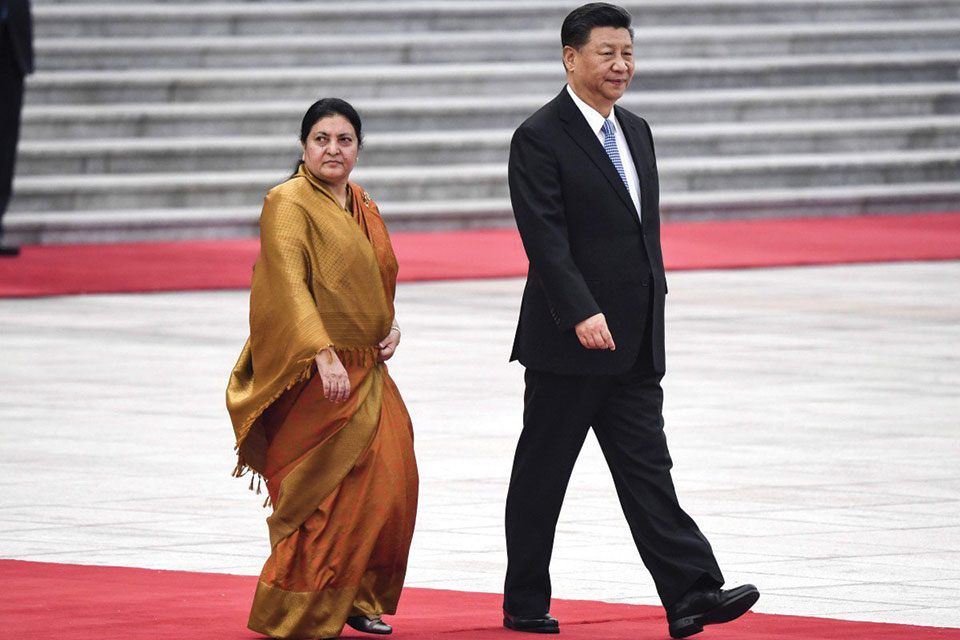 Yes, President Bidya Devi Bhandari went to China on a state visit pegged to address Second Belt and Road Forum for International Cooperation, and returned home last week. That is a fact. It is also true that her only predecessor President Ram Baran Yadav visited the communist country up north twice but was not accorded a state visit status. Beyond that there is little to go overboard, unlike what Nepal Communist Party (NCP) government headed by KP Oli’s wants people to accept.

There was something for everybody at the Belt and Road Initiative Forum. The Protocol to the Transit and Transport Agreement, signed during Bhandari’s Beijing visit, creates a long-winding but nevertheless an alternative route to the sea, serving more as a likely deterrent to the type of economic blockade India in the past imposed on against Nepal. How the latest measure translates into action and to what benefit for Nepal is yet to be assessed. Bhandari is no executive head but an impression is being created as if she held significant talks through her interpreter.

The ceremonial head of state, notwithstanding her personal rapport with Oli, is inherently constricted by the very letter and spirit of the position she claims to have fought for as a communist leader during the humdrum of raw political activity and electoral politics she was especially engaged in after her husband and noted leader Madan Bhandari was killed in a motor car accident under suspicious circumstances nearly three decades ago.

Confined to correctness
In essence, Bhandari’s China visit was a correct routine revived after a relatively long time. The Chinese know it. The Indians know it, so do the United States and the European Union. Bhandari bid adieu to 37 other heads of state and government, who were in the know that she would then commence her state visit that was formal and technically correct but devoid of any gesture of significant warmth and extra fund of goodwill. In a degrading assessment, overly pro-Chinese groups describe Bhandari’s visit as “a chance gone amiss” in rebuilding lost trust.

It was a sort of group state visit in that heads of state of Chile, Mongolia, Portugal and Switzerland were among other leaders hosted with such reception in the course of BRI Forum. According to Chinese foreign ministry spokesman, President Xi had extended invitation for state visit to Chilean President Sebastian Pinera and Mongolian President Khaltmaagiin Battulga (from April 24 to 28), Nepal’s President Bhandari from (April 24 to May 2), Portuguese President Marcelo Rebelo de Sousa (from April 28 to May 2) and Ueli Maurer, president of the Swiss Confederation (from April 23 to 30).

Beijing wants to project a friendly face and fend off charges circulated at the West’s behest that it is a loan shark. Seen as Xi’s signature mega-project, the BRI suffered Kathmandu’s foot-dragging that irritated Beijing and damaged the country’s credibility as a potentially reliable partner. Consequently, Chinese President Xi visited most South Asian countries, including India, Pakistan, Sri Lanka and the Maldives. Man Mohan Singh had slighted Nepal during his ten years by skipping Nepal persistently while visiting all neighboring countries and more than 90 others across the globe.

Nepal’s earlier decision to skip the Boao Conference and the Shanghai Cooperation Organization’s gathering, apart from communist celebrations in North Korea, especially blessed by China’s President Xi Jinping, registered it as an inconsistent neighbor that at crucial times does not hesitate to withhold a goodwill gesture to neighbor for the line marked by others. Although disparaged as the “last vestiges of an archaic institution”, King Mahendra and King Birendra achieved much more at the trying times of the Cold War decades when big powers worked to suit their own domineering interests rather than the collective welfare of the world at large.

Foreseen scene
Tatopani border point is scheduled to resume bilateral trade in two weeks’ time, much to the Oli team’s relief. The Prime Minister compares his critics with the blind-folded Gandhari of the Mahabharat epic, and reprimands them with a “you don’t see development” line. As long as the opposition doesn’t see it, there should be no trouble. When all non-ruling party members don’t see it, the problem assumes a grave dimension.

That may be why a Chinese-sounding man and a voice widely credited to Krishna Bahadur Mahara some years ago were taped in conversation with the Nepali Maoist seeking a huge amount of money for changing the government in Nepal. Other financiers could have similar access to the power-hungry. Beijing assesses in gauging the actual worth of those holding the banner of communism in Nepal.

In China under Xi, scores of big fish among the corrupt have faced the death penalty contrasting sharply with their Nepali counterparts involved in the wide-body aircraft purchase scam, public land grabs and vertical as well as horizontal corruption because bigwigs are involved neck-deep.  An MP nominated by the now unified Nepal Communist Party mentioned the names of the recipients of her monetary munificence for wangling a seat as a national legislator. Instead of being investigated, those thus named landed in the highest positions of the land.

Oli absolved the late Rabindra Adhikary even before the government-appointed probe panel produced any report. (There is no report even four months after the probe was ordered to be completed within three months, reportedly on realization that the scam could drag quite a few names from both sides of the political divide—NCP and Nepali Congress.)

Reliability on credibility
Flaunting their pro-Chinese stance, many pretentious individuals claim to possess “inside” information. Whatever the political situation in Nepal, Beijing treats it like an independent country under the principles of Pancha Sheel. If and when there should be any abrupt turn of political course, it would not be accused of complicity in the changes. For some years now, it has been consulting with New Delhi for a coordinated part of their respective long-term strategy and likely implications.

There are mixed reactions of enthusiasm and anxiety to the BRI, with one group expressing concern over China flexing its economic muscle and the other group seeing in it a fertile new avenue for infrastructure development that enriches and enhances scores of countries. Will it inaugurate an era of debt trap that would elevate China to the superpower economic status? The view depends on which side one is on: benefit from a new dominant economy or ensure the traditionally dominant giant’s share in global trade.

Beijing does not ignore the implications it might create in the neighborhood and other capitals among its 14 immediate neighbors. Bhandari’s supposedly ceremonial but glorified job does not have much to do, except represent the message of goodwill or correct deal. No one-on-one talks were held because of the leaky ship that has become. Beijing sees Nepal’s dominant communist party infested with unreliable, squabbling and power-seeking upstarts who see-saw between Delhi and China without a clear program of action befitting immediate neighbors that have acquired staggering political and economic clout on a global scale.

Call for caution
The proposed 73 km Xigatse-Kathmandu railroad, costing $ 3 billion, requires a high degree of technical knowledge and skill. But at what costs and benefits, Nepali people are yet to be explained. For India and China time and costs will be greatly reduced.

Were Xi to descend upon Kathmandu, the government’s predictable claim would be to dub it a grand success. Going overboard would only fuel and fan anti-Chinese feel among disenchanted masses cheated by the ruling comrades in Nepal waving their hammer-and-sickle carrying banner more out of habit than commitment to ideology. Neighborly attempts at nibbling at Nepal’s territory are just below an extremely thin surface, ready to pounce at a vulnerable nation.

Nepal experts in China had for long placed trust in the Maoists. Non-show up at Boao, SCO and Pyongyang nullified the already shaky level of trust in the new millennium. The capitalist world’s cascade of criticism against communist China springs from a desire to maintain the status quo to the advantage of traditionally dominant forces.

Distanced as it is from the declared communist ideology and faithful practice, KP Oli and former Maoist Pushpa Kamal Dahal-led NCP has no proven empathy with China’s communism or, for that matter, any of the other nearly half a dozen communist governments in various countries—bit by bit, shedding body parts of the communist edifice like a tadpole in the process of emerging as a full-fledged frog.

BEIJING, April 30: President Bidya Devi Bhandari who has been on the nine-day State visit to the People’s Republic of... Read More...