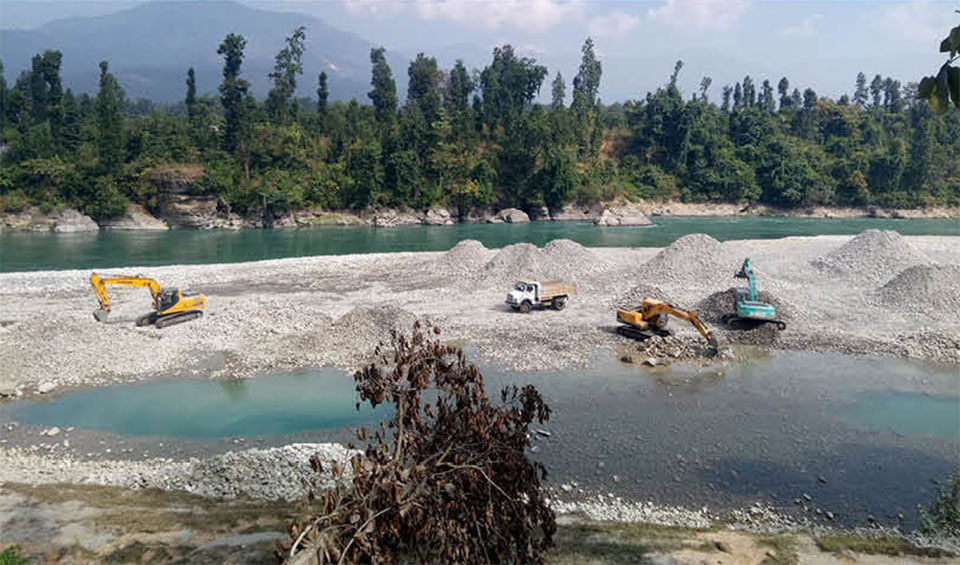 SURKHET, Nov 13: There appears to be a dispute between the Bheri-Babai Diversion Multipurpose Project and the Bheriganga Municipality where the national pride project is situated. The dispute is related to taking permission to use local natural resources, paying revenues, and distributing compensation to the affected locals.

The municipality has told the project administration not to extract river components without its permission. Crusher machines are installed to extract sand and aggregate from the river.

“The project office is operating crusher machines in the forest areas and extracting materials from the river. It needs to be stopped right away, and we have written the concerned officials about it,” said Renu Acharya, deputy mayor of Bheriganga Municipality, “We have told them to deposit the revenues collected till now.” Both the entrance and exit of project lie in Bheriganga Municipality.

According to Acharya, the project also needs permission from the local government to use national and community forest areas besides the river. The government had earlier decided to provide 5.42 hectare land of forest areas for the head works, tunnel, and other physical infrastructure. Among that, 3.86 hectare land lies in Bheriganga Municipality and the rest lies in Lekbeshi Municipality. An agreement was signed in this regard with the Surkhet office of Department of Forest.

“In the name of national pride project, they are working without co-coordinating with the local units,” said Acharya, “We won't allow them to work further unless the locals' demands are addressed and the modality of using natural resources is finalized.”

However, according to project officials, the project is doing everything to comply with the requirement of the local units. “The local units have written about revenue of river extracts and prior permission,” said Sanjiv Baral, head of the project, adding that due procedure would be followed about it and the construction company would pay the revenue. He also denied existence of any dispute regarding compensation. "We are in touch with the concerned agencies about compensation with the help of District Administrative Office,” he said, “We are in regular touch with locals of the affected areas.” According to him Rs 250 million is allocated for compensation.

He also informed that discussions were going on regarding the use of government land.

GULARIYA, April 3: The Bardiya National Park (BNP) has provided compensation to the family of a teenage boy killed in an... Read More...

Bagmati Province spent only 15.78 percent of the allocated budget in the first half of current FY
8 hours ago