Construction of bridge over Kamala River stalled for years 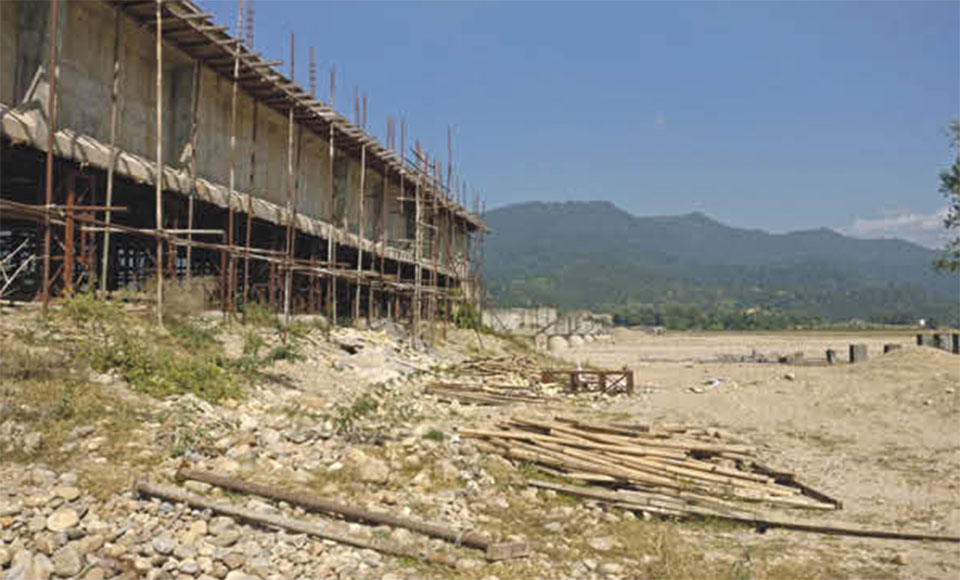 The under-construction bridge over Kamala River in Udayapur. Photo: Republica

UADAYAPUR, April 20: Six years after signing the agreement for the construction of a motorable bridge over the Kamala River in Udayapur, the project is heading nowhere. This national pride project which is expected to connect Sunsari's Dharan with Chatara-Katari-Sindhuli of Udayapur and Hetauda of Makwanpur will be 500 meters long.

The agreement for the project was signed in 2011 and was supposed to be completed within the next three years. However, the project has not picked up pace even after six years. This has made the locals doubtful whether they will actually see a motorable bridge over the river.

"Six years ago, when we heard about the construction of the motorable bridge over Kamala River, we were elated hoping that it will ease our journey to Sindhuli," said another local Raj Kumar Sharma, adding, "As the project has not picked up pace since long, we doubt if it will be ever completed."

The first deadline of the project expired three years ago, following which the government had extended the deadline again. But the under-construction bridge remains in status quo. This is likely to affect the Madan Bhandari Highway, according to the highway project office in Gaighat. There are altogether 43 bridges in between Chatara to Sindhuli along the highway. Around two dozen bridges, which were constructed after the inauguration of the bridge over the Kamala River, have already been completed, says Lalijung Khanal, chief of the project.

In the beginning, the project was entrusted to Pappu/Lumbini JV. Later, the government took action against the company for not completing the project in time, which further delayed the work. As Pappu Construction backed out from the project, efforts are underway to convince its partner company Lumbini to complete the remaining work, says project chief Khanal.

Govinda Dumaru, an engineer with the highway project, informed Republica that the estimated cost of the bridge is Rs 537 million. However, Pappu Construction had signed the project for Rs 345 million on July 13, 2011. So far, only 50 % work has been completed.

UDAYAPUR, Nov 5: The Commission for the Investigation of Abuse of Authority (CIAA), Udayapur, has arrested an assistant forest officer on... Read More...