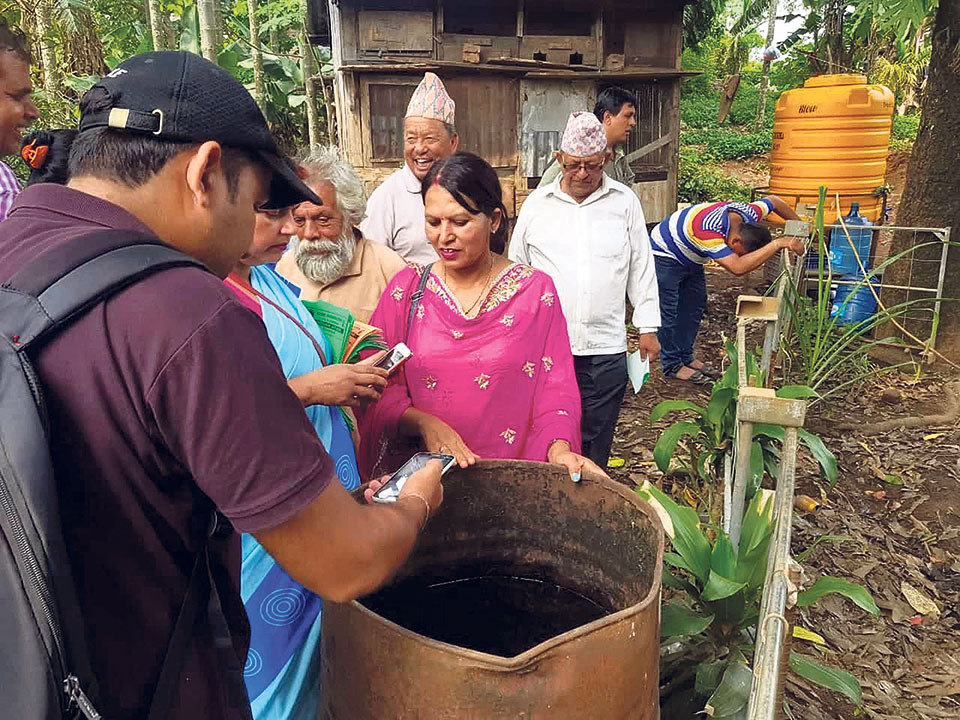 Members of a rapid response team inspecting water vessels at a house at ward 14 of Dharan Sub-metropolis on Saturday.

DHARAN, June 3: Dharan Sub-Metropolitan City has sought help from the provincial and federal governments to combat dengue outbreak which has infected 75 people in three weeks.

Despite the local unit's effort to destroy the mosquitoes that carry the disease, dengue is spreading at an alarming rate in the sub-metropolis, say the local authorities.

More and more patients are arriving in hospitals everyday as the total number of dengue-infected patients has reached 75 within three weeks, according to doctors.

The sub-metropolis has been fogging different areas to control the mosquitoes that carry the disease ever since recording the first case of dengue three weeks ago. But the number of patients continues to rise, according to health officials.

“The people of Dharan are used to storing water in open tanks for daily use since there is a shortage of water in the sub-metropolis,” said Maheshwar Rai, a member of the Rapid Response Team mobilized by the government to control the outbreak of dengue.

“This has made it difficult to bring the outbreak under control,” he added.

He claimed that until a campaign to destroy the mosquito eggs and larva is not run, the outbreak cannot be controlled. He said that hundreds of thousands of eggs and larva were found in the water stored in tanks and vessels used to store water by households on Friday and Saturday.

“We even found fully grown Aedes mosquitoes in some of the households. The number of larva and eggs were much higher than our expectations,” he said, “The people's representatives of the area should take the initiative to resolve the issue otherwise more people will get sick.”

He stressed the need for launching a cleanliness drive and urged households to dispose of the water they have stored.

Acting Mayor of Dharan, Manju Bhandari Subedi, said that the sub-metropolis has asked for help and cooperation from the federal and provincial governments to control the outbreak.

“The sub-metropolitan city has tried its best to bring the disease under control. However, it has gone out of control,” she said, “We have already written to the federal and provincial governments for help to fight the outbreak.”

Doctors in Dharan have expressed concerns saying that there might be more patients who have not reported to the hospitals.

“Some patients are brought in serious condition and they need to be placed on ventilator,” said Dr Bijay Kumar Khanal, coordinator of the Rapid Response Team.

A meeting of the Rapid Response Team on Sunday asked for extra beds and ICU facility keeping in mind the rising number of patients.